The Kiwi Route is a direct and appealing "approach" to the summit tower of Waddington from Combatant col. It takes a relatively protected line up a rib of snow and ice through the otherwise threatened North face, reaching "the stroll", a ramp of snow below the summit tower. The standard finish is via the notch chimmney. From a camp on the Col, it should be possible to go up and down in a day with good conditions.

The route breaks up nicely into three sections. After a short (5min) threatened walk through a debris field, the Bergschrund is crossed at about 9900'. From here, overhead hazard drops and the climbing begins. an 800 foot section of 45-60 degree ice pumps the calves and deposits you on a breathtaking 50 degree snow arete. After this, puzzle your way through a short icefall and walk up lower angle snow.

The summit tower features steep mixed climbing on featured rock. For most of the year wild rime formations are present.

Cross the last schrund well left of the notch, and climb a ramp. Follow weaknesses with 4th-low 5th class movement up and right on the face of the Tooth. After reaching the notch, 2 rope stretching pitches of steep mixed climbing give way to easier terrain. In the Don Serl book, difficulties are described as 5.7 with some A0 pulls on fixed gear to surmount chockstones. We found most of this fixed gear encased in ice, and pulling these overhangs free felt like about M4-5 in Colorado. We encountered several sections of steep ice, one of which was about 3 bodylengths long. Rock gear was usually present. Normally 4-6 pitches from the notch will land you at the summit.

Location: The furthest route left(SE) on the north face from Combatant Col. Cross the schrund as far left of the seracs as possible

Descent: it is possible to reverse the route with extensive down-climbing, but the preferable option is to rappel the summit tower (4 raps with double 70m ropes), climb back up a short couloir to the shoulder of the NW summit, and then descend the angel glacier via the Firey route. This involves mostly walking, though finding the easy way through the icefall involves some trial and error. Several sections are threatened from above by relatively active seracs. 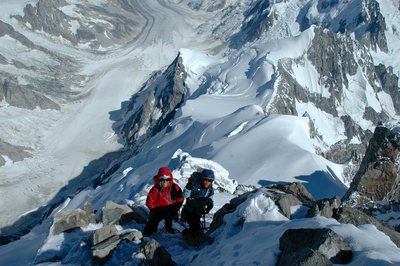 preparing the first rap from the summit. The l… 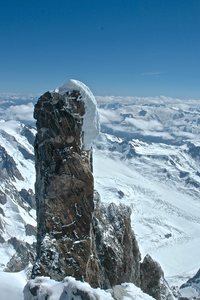 looking at the summit of the Tooth 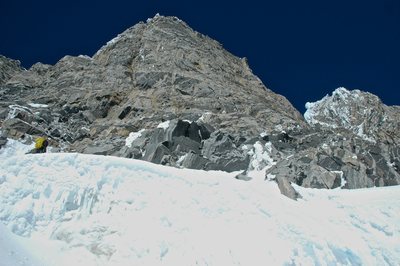 where we crossed the upper schrund 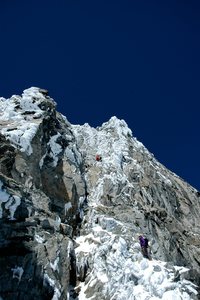 The first pitch from the notch.