The standard route, if there is one. Allen Steck, of the famous Steck-Salathe on Yosemite's Sentinel Rock, was part of a big Sierra Club expedition. They float-planned to a lake fifteen kilometers away from where Mike King lands today. The first ascent camped at 12,200 feet, left camp at 3:30am, and summited by 1:30pm.

When to climb Mount Waddington poses a dilemma. During the long days of early summer, the Bravo Glacier is safer to climb, but the summit tower may still be shedding big chunks of the winter's ice-feathers down the route. Once the summit pinnacle is free of the ice threat, the crevasses of the Bravo Glacier will have opened up, making passage difficult. If crevasses force the route closer to either Bravo Peak or Spearman, then climbers are exposed to avalanches.

For most heli-supported expeditions, the climb begins from the top of Rainy Knob. Large crevasses on the Tiedemann Glacier convince most parties to both land and camp on the knob. Since flying happens during daylight, it will be too late to start climbing the Bravo after flying in. Climbing literature is full of reported near-misses by snow, ice, and rock falling down the Bravo. It won't be a waste to spend time on the knob observing avalanche hazards and getting ready for a proper alpine start the next day.

The route up the Bravo Glacier is ideally centered between Bravo Peak's east ridge and the lesser southeast rib. The rib and ridge join up high, forming a cul-de-sac. Climbing out of the cul-de-sac, over the southeast rib, is the crux of the glacier travel. Big avalanches from high on Spearman Peak make it important to cross the rib as close to Bravo Peak as seems safe.

Once over the rib, the next goal is the Bravo-Spearman Col. Setting up a camp here is possible. From the flat col, two kilometers of easier glacier travel are needed to reach the final snow-slopes. 1,700 feet of steeper, but "easy", glacier leads to the Tooth, a spectacular sub-summit.

A bergschrund has to be crossed and short snow slope ascended to get on the rock of the Tooth. A fourth class ledge, or ramp, traverses right, across the width of the Tooth, to the notch between the Tooth and summit tower. From the notch, a narrow rock ridge is crossed to reach the chimney that leads to the summit.

The chimney has about 250 feet of "easy" fifth class, passing three chockstones along the way. The third is the crux, and even in dry conditions, some teams aid around the last chockstone via fixed pins. From the top of the chimney, traverse right to the final summit gully, fourth class.

The upper rappels can get stuck on ice feathers and loose blocks. After rappelling the chimney back to the Tooth-South Summit notch, down-climb the ramp to a final rappel past the Tooth's bergschrund. 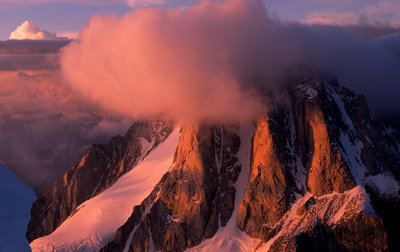 Sunset clouds over Mt Combatant from our camp @… 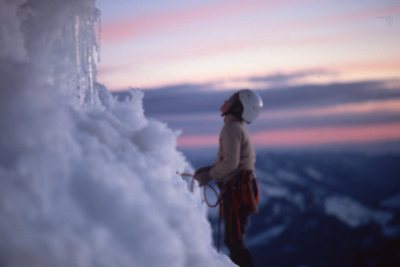 belaying at bergschrund below summit tower 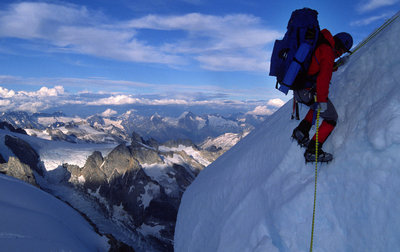 Sunset rap on the way down to Rainy Knob 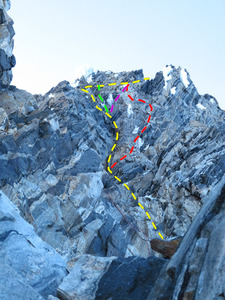 View of the SE Chimneys during evening rappel.… 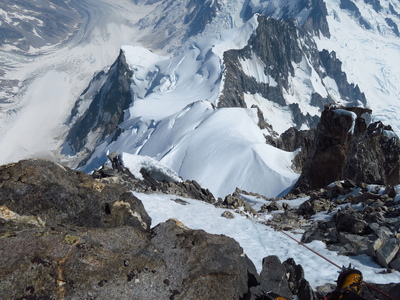 Rappel from summit with Rainy Knob far below 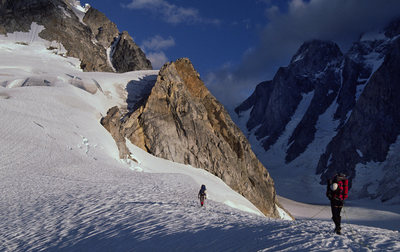 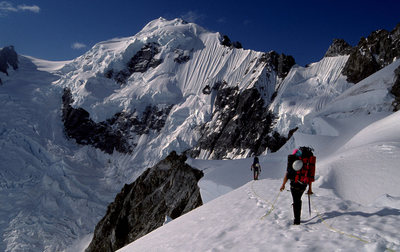 Gary and Dale moving into the Bravo Glacier maz… 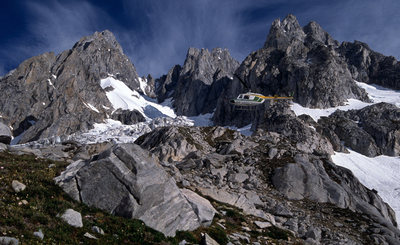 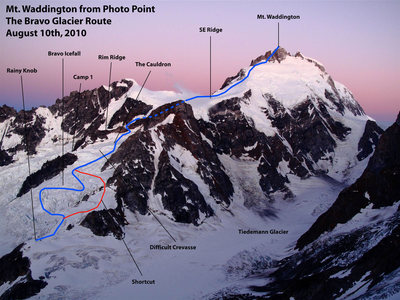 Gary Kuehn - one last look at Waddington from '… 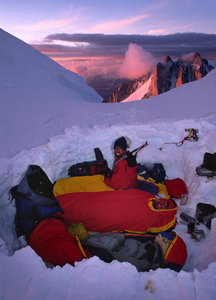 High Camp below the Tooth. My old Super Guides… 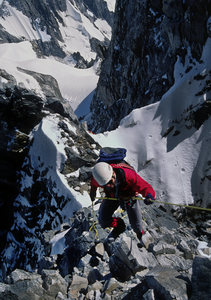 Gary Kuehn rapping to the Notch. From there we…