Route still has some loose rocks both large and small to be removed so be careful what you grab and where you step. Also some vegetation is hiding good features. Some pencil cactus is on the route so watch out for that too.

I would consider the last moves to the trees the crux based on awkwardness, so get really good protection in before that. A fall while trying to reach the trees would be very shitty. Don't do it. There are some very nice crimps around and pre-plan where you are putting your feet. You are on a great ledge before the this so you have plenty of time to look and feel around before committing to anything.

Reimer's Ranch does not have enough traditional routes.

Right of Fiscal Cliff. Starts on the "staircase" of ledges and then up to the right of the arete formed by the roof.

Top out, then rap back down on one of the easier sport climbs to the left where the sport anchors are easily reachable by laying on your stomach.

Small cams such as a set of black through red aliens plus a few C4s such as 0.5 - 1 and some small to medium nuts is a good start. Tricams may be good. Sling the two trees up top for an anchor now, belay your second up, then top out taking your anchor materials with you.

My first pieces were at the crack formed by the roof and wall. Don't put protection behind the flakes or large loose rocks throughout the climb. 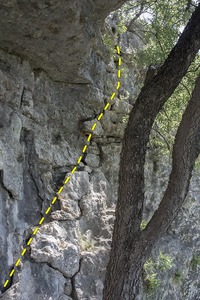