Holloway called this the hardest of his "Big Three" when he climbed it back in 1977. Since Trice, another of the "Big Three", is now considered hard V12, Slapshot should be at least V13 ... if it ever gets repeated. Since the first and only ascent, one hold has broken and another has lost some friction, making a repeat somewhat harder. But although they are small,slippery, and sharp, there are still enough holds to climb this thing.

This route is in a scoop in the middle of the blank-looking east face. 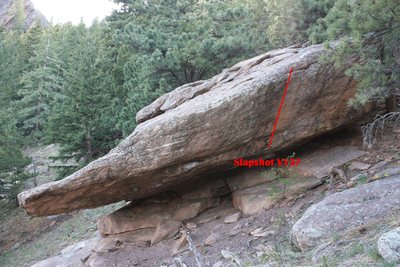 Slapshot climbs the reddish scoop in the middle.