Routes in Cirque of the Uncrackables

Dark Side Bouldering Closure Area
The debris field from the Sept. 20th rock fall reached the Dark Side bouldering area, and this area is now closed.


Grand Wall Closure Area
The base of the Grand Wall (between Sense of Urgency and Commando Crack) and all trails leading to these areas. This includes climbing routes such as Java Jive, Coyote, Flex Capacitor, Commando Crack, Movin’ to Montana, Knacker Cracker, Teenage Wasteland, Exasperator, Peasant’s Route, War of the Raptors, Cruel Shoes, The Flake, Apron Strings, Sunday Whites, and Sense of Urgency.

Slhanay Closure Area
All routes between and including Dogzilla and The White Feather.


Parks Closures and Day Use Permits Parks were closed in 2020 then a day use permit system was instituted in some places. Please check Parks and Rec Site Closures for up-to-date information. Specifically, for the Stawamus Chief before using to ascend or descend for climbing.


The popularity of Squamish within the #vanlife community has increased to the point that there is great concern about the group’s collective environmental impact. “Wild” or “Freedom” camping has become unmanageable environmentally because of the high numbers of campers. This is a serious issue that causes conflict between locals, home owners, and climbers!

The District of Squamish PROHIBITS camping within the municipal boundary, This includes sleeping in a vehicle anywhere within District boundaries. A bylaw gives the District the power to issue tickets for contraventions.

· the dirt road to the kitesurfing “Spit.”

This offwidth corner is found in a large recess to the left of Cobra Crack. Climb a triangular block at the base, then up the crescent offwidth to an overhanging finish. Very clean and excellent, and it would probably be rated 5.10c in Yosemite.

Place a #5 Camalot in the lower section and then push two #6's above your head the rest of the way. There is a piton on the wall to your right which you can clip if you come out into a lieback for the last few feet.

2 bolt anchor/rap. I think one 60m should get you down, the climb is not "40m" as the guidebook says. 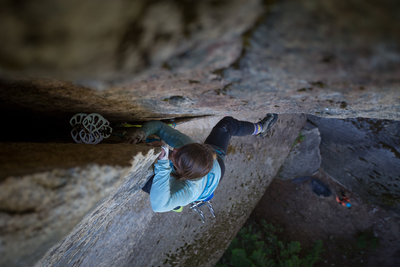 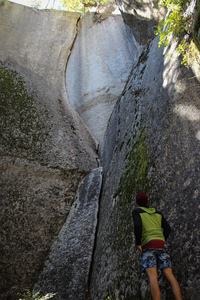 Looking at the spectacular line of The Scimitar

More About The Scimitar