This is likely the easiest way to summit the Lesser Spire. Ingraham calls it 4th class, but he does mention roped vs. unroped climbing, so his definition of 4th likely includes roped climbing. Approach by either east (via Rabbit Ears Canyon), or west (west described herein). From the Topp Hut, hike the road towards the mine, but turn right on an old mining road before the mine proper (this is the approach to Southern Comfort Wall). At the end of the road, follow the climbers trail to Southern Comfort. Follow the climbers trail all the way around to the routes in the middle of the wall, then follow a faint trail leading right and descend a break through the lower wall into the gully. Consistent with Organ Mountain approaches, your 'trail' now consists of finding the path of least resistance. You want to aim for the col just north of the Lesser Spire by ascending a maze of minor gullies. The area is relatively lightly vegetated (by Organ Mt. standards), but there are some thick sections and there is some loose rock to watch for. Once at the saddle, you are afforded with a great view of the Rabbit Ears to the east, and a rare vantage point of the chutes (incl. Boyer's Chute) on the west side of North Rabbit Ear. Belay from the saddle, or better yet to avoid rope drag and some brush, scramble up and a little left to a nice belay stance in some brush. Climb out left, then turn up towards the left edge of a largish roof (low 5th), and set a belay once past the roof. Scramble right then left to a large ledge. From this expansive ledge, you can go way left (where the ledge ends) make an easy but exposed move and turn right, or go up over the headwall directly (right over some flakes, hand traverse left to a vertical crack, and up. Set another belay amongst some large boulders. From here, scramble to the summit.

Pitch 1: Best to belay from a ledge up and left of the saddle. Climb along the left edge of the slab below the roof in the picture. Once past the roof, look for a rap station on a small tree which can be used as an anchor point. Most of the pitch is in low fifth range, with one move around 5.4 or so near the middle.

Coil rope and scramble, first to the right continuing in the same groove you have climbed in. Once a way opens upward, take it. Head right toward the left side of a short buttress sticking up prominently on the right. Go up the corner left of it and up and left to a large ledge below a head wall.

Pitch 2: The Normal Route turns the head wall on the left. From a belay on the left end of the ledge, walk along the bottom of the wall toward a bush. Squeeze through between the bush and the wall. Continue traversing left to a large boulder separated from the wall by an off-width. Climb the boulder left of this crack. (Protect with #3 Camalot or larger cam.) From the top of the boulder, step over to the grassy ramp (quite dirty). Follow the ramp to a rap station or set up belay short of that at a tree.

The head wall can be climbed instead (about 5.8). To do so, go up the sickle-shaped crack on the right of the big grassy ledge to a horizontal crack. Traverse left for quite a bit to a short, vertical crack in the top part of the wall, and go up it.

To scramble to the top, follow the ramp, step up as you do this, and then take to the slab on the left with a crack in it. Scramble up to the top from there.

This last scramble will need to be done in reverse going down, or you will need to set up your own rap station. There are three raps back down to the saddle below Lesser Spire. A tree at the bottom of the large ledge (station #2) is the only rap station not mentioned so far.

All in all, the Normal Route up Lesser Spire is still a remarkably easy route up a seriously impressive peak. Definitely worth it.

From the small col north of Lesser Spire, the route climbs the NE ridge. You can reach the col from the east (Rabbit Ears Canyon) or west (ascend a gully from below the Southern Comfort Wall). Three raps get you back down to the col.

Light rack. No fixed anchors. There are old rap slings for descent. 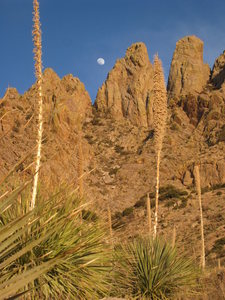 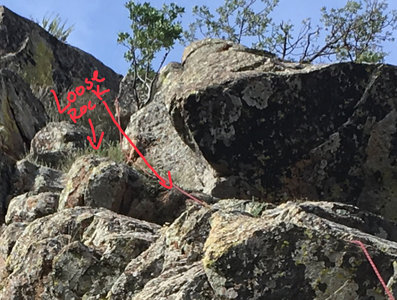 Pitch 1. Be careful stepping as they may dislod… 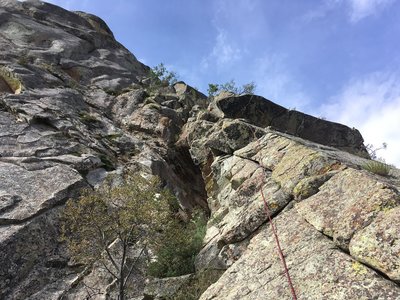 Pitch 1. Boulder towards the top has become lo… 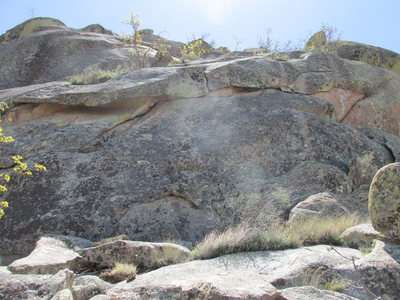 The head wall can be climbed by taking an advan… 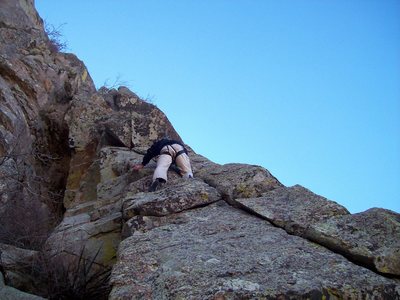 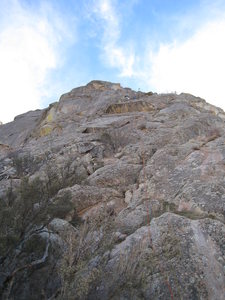 Looking up at the NE face from the col. Belay… 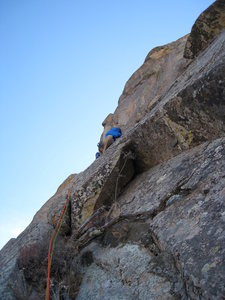 The first pitch of roped climbing, aiming to by…