The most famous of the routes at Moon Hill, and perhaps even of YangShuo, dozens of photos have been taken of climbers clinging to the underside tufas and pockets of Moon Walker. There are really two routes in one here: an easier 7a+(12a) up to the second cave (though the anchors here look a bit rusty and dodgy to me), and the full 7c(12d) which pushes an additional 5 meters or so to the third cave near the apex of the arch. The sequences are pretty straight forward for the most part, the main difficulty is the steepness and endurance. In my book, I think 'Over the Moon' is the slightly nicer route, but this is not far behind.

This is, of course, an amazing route, and it just gets harder and harder the further you climb. Gaining each of the three caves along the way has its own crux; the final one has you pulling on small holds when the route is the most overhung and you're the most pumped. A couple knee bars here and there may provide some relief along the way, and the second cave does offer a no hands rest where one can recover for the final push.

And, don't forget the "Moon Swing:" once the rope goes up to the final anchor, keep the trailing end through the draws to belay from (to stay out of the way of the swinging climber). Tie into the lead end, climb up to the second draw, and let go for a *huge* swing across the arch.

The route starts on top of a small pedestal down left of all the other routes on the main Moon Hill face. You can also approach from below, about 20 meters up a steep trail from the arrival area below the arch. The first bolt is disconcertingly high, though the climbing is easy to get to it.

Bolts up to a two bolt anchor in the third cave. Use the new bolts down lower on the lip of the cave rather than older, rusty ones up high: obviously, newer gear is safer, but the wear on the rope is far better as well. Alternatively, stop in the 2nd cave and lower from the two old coldshuts high up in the cave ... if you dare. This anchor could certainly be replaced.

This route is difficult on TR as falls put you pretty far from the rock, and cleaning it top down is even worse. So, the best method to clean seems to be a combo: have the leader back clean as many bolts as they can, 3 or 4, and then TR up to get the rest, taking a mini-Moon Swing as a bonus.

Lower down in to the trees below. A 60 meter rope will reach. 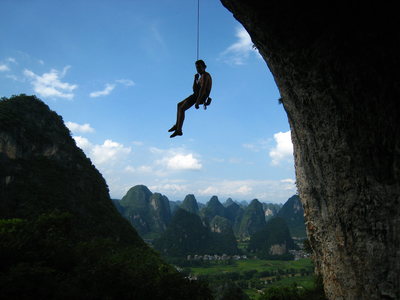