For a much better printable (PDF) topo and the history of the route, go here.

Welcome to the world of sportaineering. Squawstruck goes right up the south face of Squaw Peak (also known as Squaw Mountain). The line isnt the most direct in the world, and some ledges and short pitches could be considered a drawback, but the rock is mostly good, the climbing is great, and the route is long! The route is also remarkably sustained, with five 5.8 pitches, four 5.9 pitches, twelve 5.10 pitches, and one 5.11 pitch. I tried to keep the route 5.10 or under the whole way, and almost succeeded.

The route is entirely bolted; no trad gear is necessary. The climb is characterized by slightly less than vertical pitches punctuated by roofs, though theres pretty much a bit of everything. There are several large ledges that interrupt the route. Some of them you can walk in your climbing shoes, but some you need to change back into your approach shoes for.

Youll encounter a wide variety of limestone on the route, from a few choss sections to beautiful water-streaked loveliness. Youll see rock of all colors, including light and dark gray, white, black, tan, red, orange, brown, and blue.

This route was over two years in the making. More than 2/3 of the bolts on the route are stainless. Every belay has at least two bolts and a nice ledge. Apart from 3 & 4 and 7 & 8, I wouldnt recommend linking any pitches. Pitches 9 and 11 kind of suck, but everything else has good climbing. The whole route is south facing and gets a lot of sun. Winter is too cold and snowy, summer is too hot.

2) 5.8, 75, 8 bolts  Cross from the pillar/tower to the main wall via the Leap of Faith and clip the chain anchor (this is where you rappel from if rapping the route). Climb up easy terrain to a dihedral.

Unrope and scramble up easy 3rd class terrain up to the big, sloping ledge. Angle right after the scrambling. (Keep your climbing shoes on. Its a short walk.) Pitch 3 stars in a shallow, chossy dihedral.

Move up and left to the base of the next pitch, which starts just left of the edge of the pillar (belay at a flat spot to the right of the pillar).

Walk right a couple hundred feet to the base of the next buttress. Pitch 9 starts on a blunt arete to the right of a broad trough.

9) 5.8-, 110, 11 bolts  Dirty climbing on somewhat suspect rock leads to a large, dirt-covered ledge. Belay at the base of the next section of cliff. Go right and then up at bolt 8, not straight up.

Scramble up to flat spot and unrope. Put approach shoes on and head northwest uphill till you see a short red fixed rope. Scramble up short cliff band (using fixed line), then head up and left. Youll see a dark cave/mine at the base of the next section of cliff. Aim for that, switchbacking your way up the slope to make it easier. Pitch 12 starts just right of the mine. The mine offers a nice respite from the sun.

14) 5.11-, 50, 9 bolts  Tan slab with horizontals leads to a corner, which leads to a roof. Enjoy the exposure, get a rest right before the roof (there are bolted variations to the left and right here, as I didnt know which would be easier. The left one is easier and better, and the right can lead to a bigger pendulum fall. So go left.) and then make insecure, desperate moves to the belay. This belay (an exposed stance) is the worst on the route.

15) 5.10b, 60, 7 bolts -- Climb up the face, then head into the corner to some guano-draped holds. At the roof, turn the arete to the right and face massive exposure as you crimp your way to the belay.

Put approach shoes on. Go up the slope, using the fixed line if necessary, then head right along the base of the cliff. Continue right (east) a few hundred feet to a shallow, right-facing dihedral. Theres a 10 length of rope attached to the first bolt, making it easier to see.

Unrope here and scramble up 30 to the summit of Squaw Peak.

Option 1: Hike the great Squaw Peak trail back down to Rock Canyon (4.2 miles). This is the fastest, easiest, and best option. From the summit of Squaw Peak, walk north. After 50 feet or so, the trail becomes well defined. Follow this for a couple miles back down to the main trail that goes up Rock Canyon, then follow that trail down canyon to the parking lot.

Option 2: Make 19 rappels (walk around pitches 9, 10, and 11 to the west) with one 70m rope down the route. From 18, rappel straight down to a 3 bolt rappel station, then another rappel to the large ledge b/t 16 and 17. Rappelling the route is the slowest and worst option. I HIGHLY recommend taking the trail down.

The route starts on the lowest point of the limestone, up a tower/pillar.

Option 1: Hike up Rock Canyon. After 10 or 15 minutes, youll come to a green gate at a climbing area known as The Kitchen. A few minutes past the gate, youll come to a really big limestone boulder on the left side of the trail (this is just past the climbing area called PAs Mother). Cross the seasonal stream in front of this boulder to a campsite on the opposite side of the stream. Locate a horizontal concrete thing and follow the trail over that. This leads to some scree slopes (not bad; the rocks are large and stable). Trend left toward the right side of a ridge, but dont go onto the ridge top. Instead, switchback your way up through the thin brush to the right of the ridge. Once youre almost level with the lowest point of the limestone to your right, cut right across a couple talus slopes to the start of the route.

Option 2: Hike up the talus gully between The Appendage and PAs Mother until you gain the ridge top. Follow the ridge up and then head right to the start of the route. 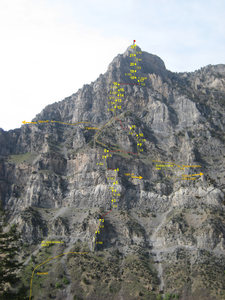 Topo with some retreat options marked. 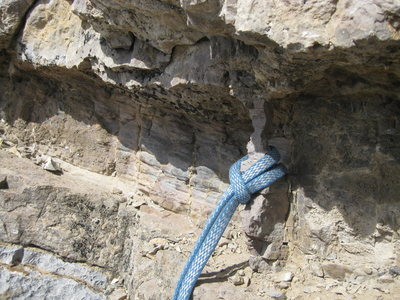 Totally bomber pro from one of my early forays… 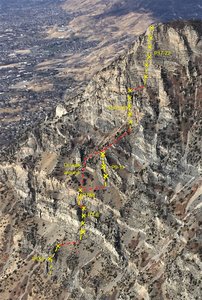 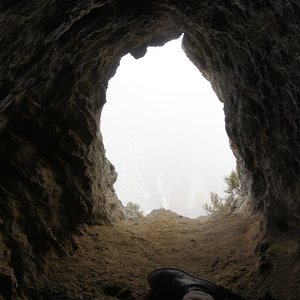 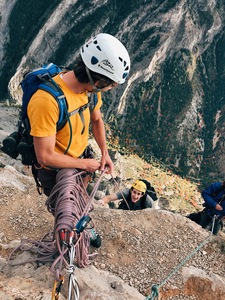 Me topping out at the summit. Too stoked to get… 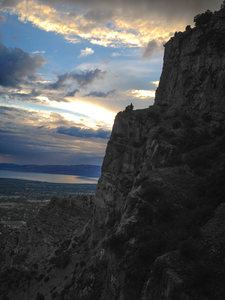 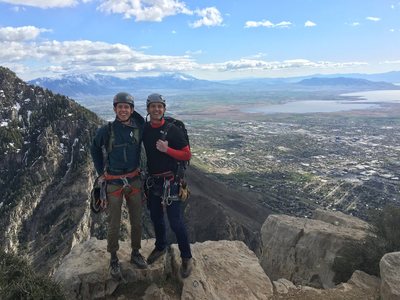 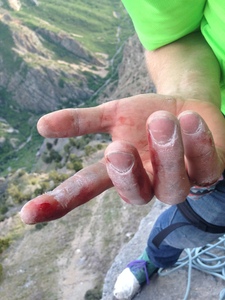 Flapper 1 of 5 on this climb. Bring your A-game… 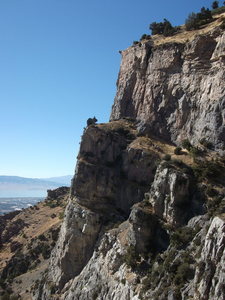 Pitches 3-8. Couple of parties are visible at t… 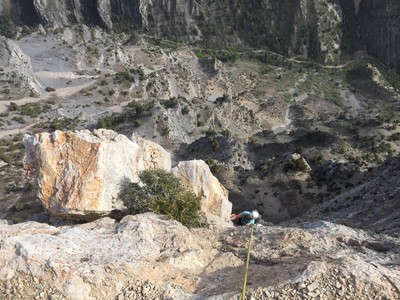 Near the top - Pitch 22 of Squawstruck 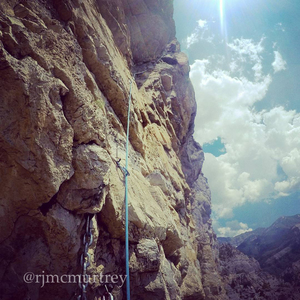 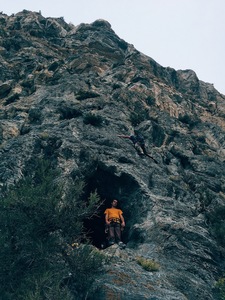 A view of Guy at the cave with another group he…