The West Ridge of Forbidden is included amongst the 50 Classic Climbs of North America. Expect stunning views, solid rock, an unforgettable summit, and fickle weather.

In early and mid-season, the best option to gain the ridge itself is to ascend the West Ridge couloir (about 40-45 degree snow). Climb the couloir until it peters out below some steep chimneys. Move left over some 4th class rock into a gully and scramble up to the notch at the start of the West Ridge proper.

In late season the snow couloir may be too melted out to climb safely. If this is the case, you can gain the ridge by climbing the rocky gully to the left of the couloir. This is how we did it in September. The rock gully is 4th-easy 5th class but was a little tricky with wet and loose rock and few options for pro.

Once the ridge itself is gained, start climbing up (duh?). Stay on or near the ridge for most of the time. The climbing is 4th and easy 5th class. Stay to the left (north side) when in doubt. An obvious steep step is reached about 2/3 of the way up. Ascend this on the left side, passing a fixed piton (5.6). Once past this, follow the ridge crest around the left of the false summit and to the true summit.

There are 2 options for the descent. You can downclimb and rappel the West Ridge itself, or you can do the "East Ridge descent route" which is actually on the NE Face.

1. The West Ridge descent seems preferable to me because you're familiar with the route already, the routefinding is minimal, and you can ditch your boots, axe, and crampons at the notch and retrieve them on the way down. Having said that, I haven't done the other descent.

From the summit, downclimb and rappel the West Ridge route (1 rope works for the rappels). Once you're back to the notch, you can downclimb or rappel the snow couloir.

An alternative to downclimbing the snow couloir is to rappel down the rock rib adjacent to the couloir. The rap route is to the skier's right of the snow couloir. From the notch, downclimb some loose 3rd class rock. Instead of moving to skier's left into the couloir, head right onto more 3rd class rock. Just before the rock drops off steeply, you should locate a rappel station. We did 5 or 6 single rope rappels from here back to the snowfield. You may need to back up some of the rap stations with webbing and rings.

2. The East Ridge Descent Route is another option. I haven't done this one, so I'll tell you what Jim Nelson and Peter Potterfield say in their guide:

"From a horn on the summit make the first of five single-rope rappels (approximately 400 feet total) straight down the NE face to a series of ledges, which are followed East. These ledges are 3rd class, except for short sections of 4th class encountered at several rock rib crossings. Traverse at this level, staying well below the ridge crest, crossing five ribs before climbing up the gully back to the ridge crest at the solitary gendarme (there is a large gendarme that marks the start of the East Ridge climbing route). Descend snow and scree into Boston Basin." 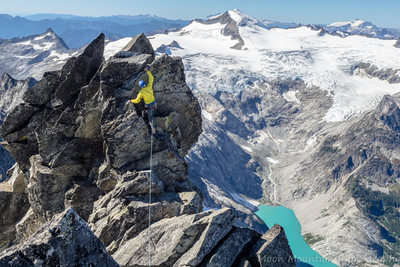 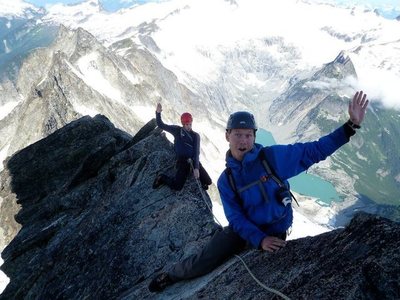 Daniel and I on the west ridge 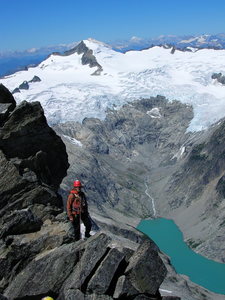 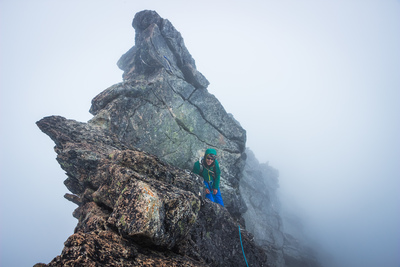 Very low visibility before it started to snow o… 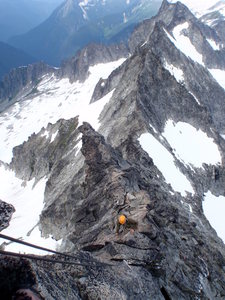 Looking down the West Ridge. Continuing past i… 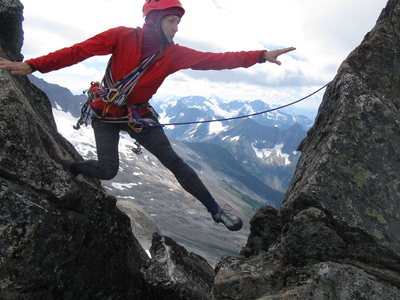 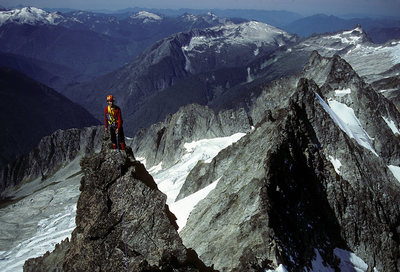 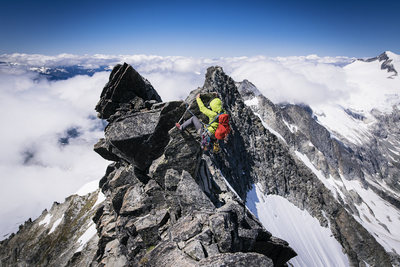 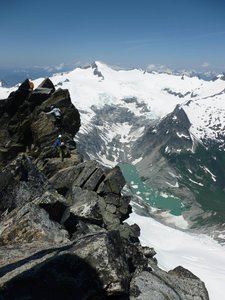 After lunch on the summit, it's time to head do… 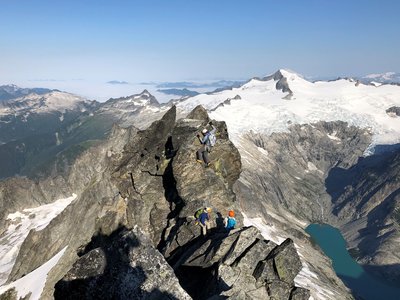 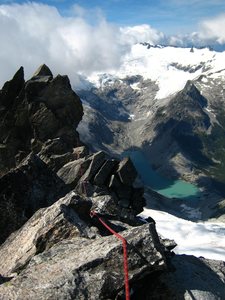 Looking down towards Moraine lake from the top. 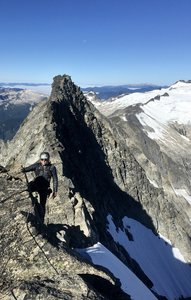