A heady, enjoyable jaunt up natural weaknesses in a quartzite tower. Quartermoon follows a broken dihedral, traverses onto a face to a wide ledge, and then continues up a variable-width chimney to a false summit to the west of the true summit (the true summit is easily reached by walking from the false summit).

This route was established solo, from the ground up.

P1 (5.9, 90') Start in a shallow trough in the corner between the north face of the tower and the east face of a buttress that juts out northward at the west base of the tower. The climbing is initially quite easy and the protection is easy to find (medium nuts, small and medium cams, if desired). At the top of the trough bear left onto the north face of the tower. Continue following discontinuous weaknesses up steeper, more difficult ground past a fixed copperhead and a single bolt. A bit after the bolt is a shallow ledge. From the ledge bear a bit left and climb relatively easy ground for another 10 feet to the chain anchors. Attached to the anchor there is a metal tag with the word Quartermoon stamped onto it.

After belaying the second hop up onto the wide, vegetated ledge and walk into the corner to the right (more-or-less directly below the second-pitch chimney).

P2 (5.9+, 115') Start by climbing the pedestal to the right. Pro is a bit scarce initially, but with a triple-length sling a large horn can be slung at the top of the pedestal. Bear left and start into the chimney proper. The climbing up the chimney is mostly stemming, with a few face moves here and there. The general feel is of leaving a relatively secure location (easy stem, almost-ledges), climbing through a more difficult section that pushes you out away from the chimney and smaller pro, and then getting back into a more secure location.

The crux is probably an awkward, bomb-bay section that requires some careful feet and faith that the holds are going to be there.

On the summit is a register.

Two single-rope rappels. A 70m rope reaches the belay ledge from the top; a 60m would reach the top of the pedestal to the right of the ledge necessitating about ten feet of easy downclimbing.

Note that the pitch lengths in the guidebook seem to be reversed.

On the north side of the Quartermoon tower; starts in a trough between the north wall of the tower and the east wall of a northward-jutting buttress.

A set of nuts, a full set of cams from micro to large, and plenty of 24" runners.

There is a single bolt on pitch 1, and both pitches are topped with chain anchors. 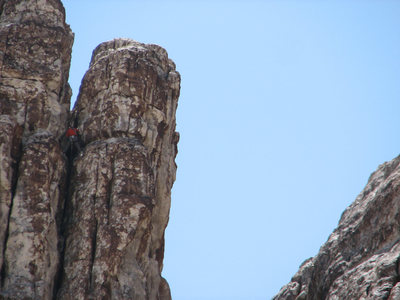 Perin Blanchard near the top of Quartermoon. Th… 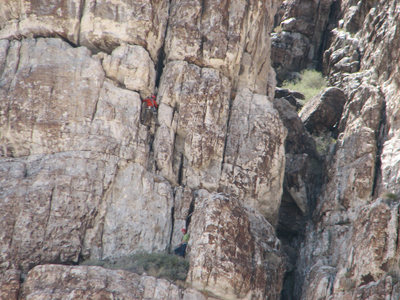