Hazards on this route include crevasses on the approach from the West Buttress Base Camp airstrip, and a thick field of deep crevasses and steep ground at the mouth of the Northeast Fork of the Kahiltna Glacier. The crevasses at the mouth of the Northeast Fork frequently turn West Rib aspirants away altogether. After you've entered this valley, objective dangers in the Northeast Fork include more crevasses, steep ground, and avalanche and ice fall, particularly after heavy snowfall. The Northeast Fork is nicknamed The Valley of Death because a team vanished here in 1981, and avalanches can sweep across the bottom of the valley after heavy snow storms. Be alert in the Northeast Fork and choose your line, your camps, and the timing of your travel in this valley carefully so as to avoid obvious crevasse, avalanche and ice fall hazards. The top section of the route, the notorious Orient Express, has been the scene of a number of fatalities over the years, including deaths among several Asian teams, for whose accidents the Orient Express is named. Conditions on the Orient Express will likely include bullet proof hard packed snow and difficult to detect slabs of wind deposited snow. These conditions make it virtually impossible to self arrest if you lose your footing and fall. The top of the mountain, particularly above 19,000 feet, is frequently the scene of extremely high winds and bitterly cold temperatures. Last, but not least, altitude can severely affect the health of your team, particularly since many teams ascend this route quickly, allowing little time for acclimatization.

The West Rib consists of, first, the initial couloir between 11,100 and 13,300 feet on the east side of the bottom of the ridge, with 40 to 50 degree snow and ice and, potentially, a section of steep mixed snow, ice and possibly rock at the top of the couloir. Above this couloir, the climbing between 13,300 and 16,300 feet includes steep snow and icy domes with angles up to 50 degrees. Following lean winters, as was the case in Spring 2007, the climbing below 16,000 feet may include slopes of rotten ice.

Between 16,300 feet and 18,000 feet, the route follows a line through several rock bands. In years past, the lower part of the first rock band was a steep snow climb. In May 2007, the first rock band had tens of feet less snowpack than it had in the mid-1990's and there were fixed lines in a narrow couloir of mixed snow and ice between 16,500 and 17,000 feet. The second rock band consists of relatively low angle scree with a small amount of 4th class mixed snow and rock climbing.

At about 18,000 feet, the route steps from the very top of the second rock band onto the upper reaches of the Orient Express. Climb up and left via the leftmost fork of the Orient Express to lower angle snow at its top. Be very careful on the Orient Express. A fall here within a roped team may drag the entire team to their death due to difficulty of stopping a fall on the steep angle and firm snow on this part of the route, particularly if the team is roped together but climbing without anchors - a common approach to climbing the Orient Express in order to reach the summit (and then descend) as quickly as possible.

From the top of the Orient Express, traverse up and left on snow, below and around the north end of the final rock band above, and onto the Football Field at 19,200 feet. Contour across and somwhat up the Football Field to the West Buttress boot track, which is typically marked with wands. Note that early in May, prior to the first ascents of the season by guided teams, you may find that these wands have been snapped off close to the ground or they may be missing altogether, a common result of the ravages of the typically fierce winter weather upon wands installed the previous year. Follow the West Buttress boot track to the summit ridge and then the summit. Be very careful on the summit ridge, particularly in windy conditions, so as to avoid a long, long, long (fatal) fall down the south side of the mountain.

Descend via the West Buttress, first to its 17,300 foot high camp. Beware on the descent - As may be the case for the wands on the Football Field, although there may ordinarily be fixed pickets on the dangerous traverse below Denali Pass, these pickets may be missing during the early part of the season. Alternatively, descend from the Football Field via the Orient Express to a convenient high camp on the West Rib at 16,300 feet. From that high camp you can descend to the 14,000 foot West Buttress camp, and from there you can descend via the West Buttress to the Base Camp airstrip at 7,000 feet. In lean years, as was the case in May 2007, the descent from 16,300 feet to the West Buttress camp at 14,000 feet may cross a half dozen significant crevasses on occasionally steep ground.

The southwest side of Denali, above the Northeast Fork of the Kahiltna Glacier. 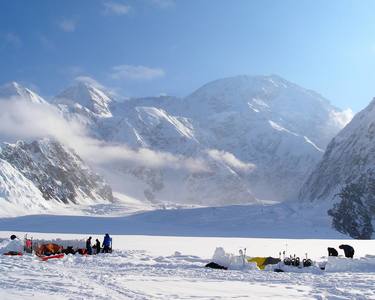 The view up the Northeast Fork of the Kahiltna… 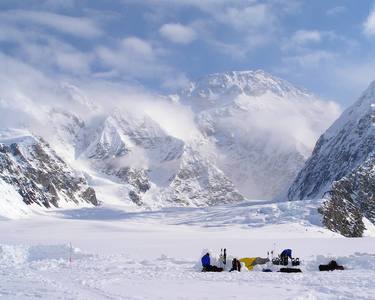 View up the Northeast Fork of the Kahiltna Glac… 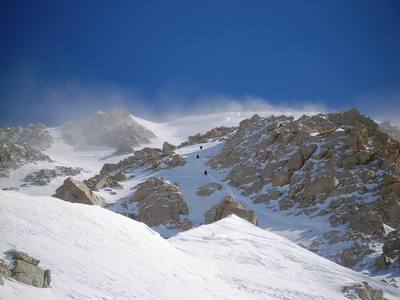 A team on the fixed ropes in the first rock ban… 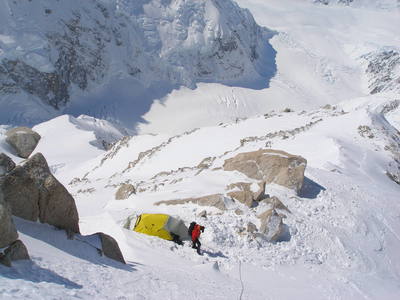 Looking down the West Rib from a hundred feet o… 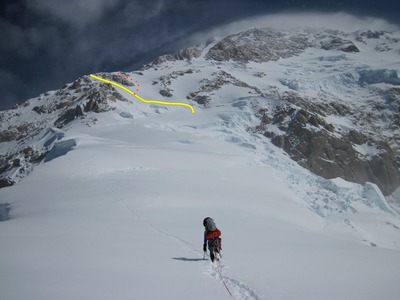 Turn left below the rock outcropping and traver… 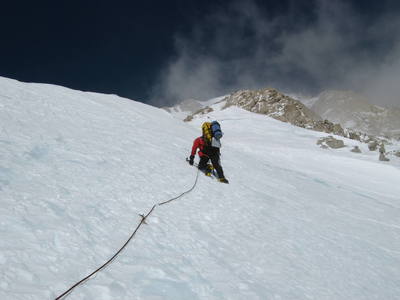 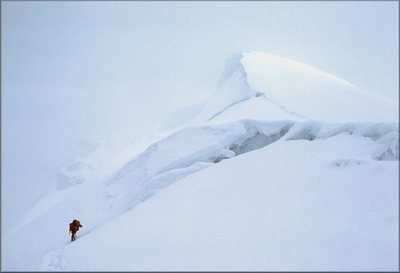 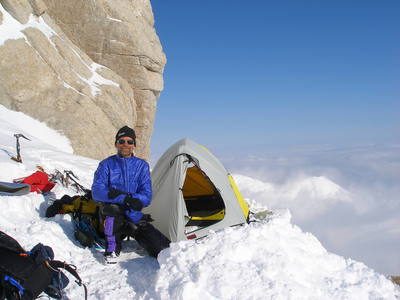 A tent platform shoveled out of a slope at 16,3… 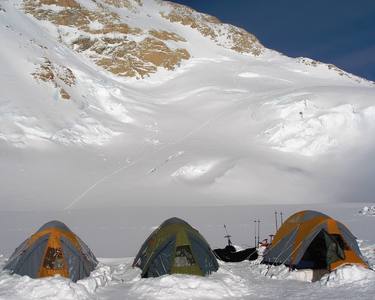 The view up a boot track - the West Rib cutoff… 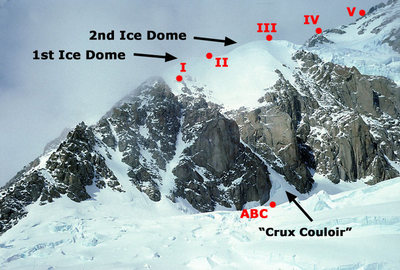 Overview of the West Rib from below, showing ou… 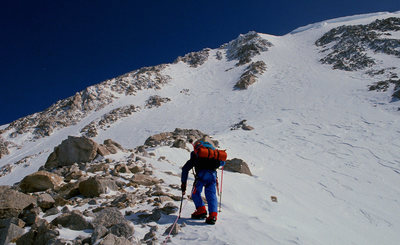 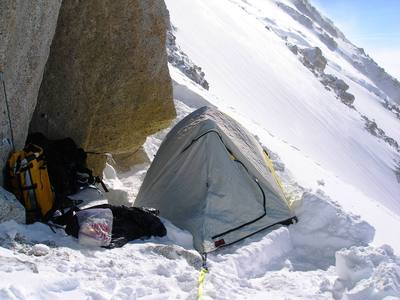 Tent platform dug in below a large boulder at a…

More About The West Rib