The FA of the Lost Arrow Tip was first done by Ax Nelson in 1946 by lassoing the summit from across the rim. Ax Nelson then used prussics to ascend the fixed rope. This ascent was highly criticized by the climbing community and called “ One of the greatest rope stunts ever pulled off in history” by Steve Roper. Later that year, an undisputed ascent of the Lost Arrow Chimney was completed by John Salathe and Ax Nelson which was the longest, and hardest free climb done at that time. The Lost Arrow Tip was ascended using aid following a crack system (the route used to climb it today) the next year (1947) by John Salathe who was a blacksmith by trade and had fashioned specialty pitons made of chromoly steel for the hard granite of Yosemite. These pitons (designed by John Salathe) would go on to be known as Lost Arrows and are still in use today.

P1: .10d pin scars and fingers right off the notch (easy for the rating, some fixed gear, short crux) to easier climbing to more fixed gear and a stance below an awkward slightly bulging, grainy, and flaring .10a fist/OW for a few moves to a belay on a huge ledge.

P2: Move left off the ledge using a couple of small pieces to a large flat edge than can be hooked or bust a psuedo-free 5.8ish move to get the next placement. A few placements interspersed with bolts/rivets (both with and without hangers..take some small wires or rivet hangers) leads to a full-on bolt ladder than ends as the angle kicks back about 15' below the top. Step out of the aiders and fight the rope drag on the dead easy slab that will feel harder with the drag.

Or, free it at 5.12b, stopping to belay halfway up this pitch after it stops traversing left to cut down the rope drag.

Terrific position and novelty make this a must do. The climbing itself is largely forgettable.

Standard Free Rack w/ one 4" piece for the OW section. Otherwise small - medium cams will do you fine. A standard hook is not required but will help at the crux. 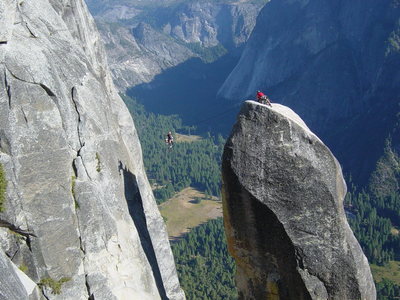 Notice the rope configuration: the climber is o… 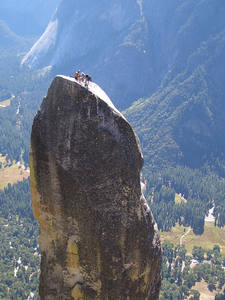 After four days of climbing and enduring a stor… 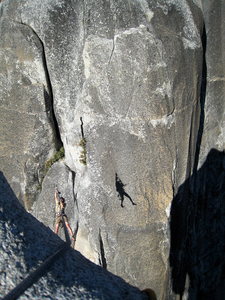 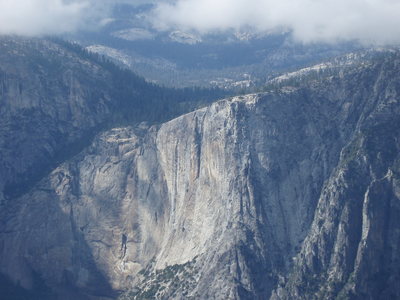 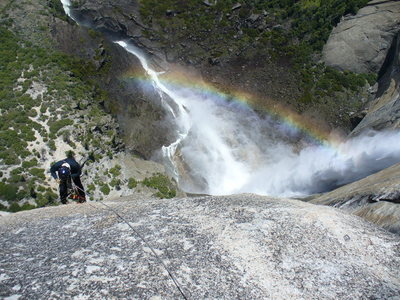 Erin Green jugging to the top. 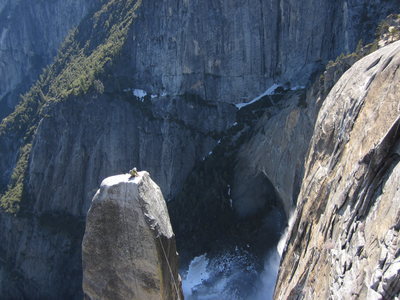 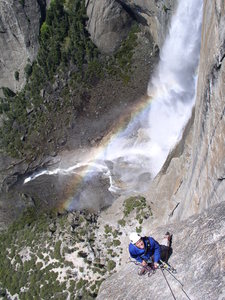 Half way up the Spire. 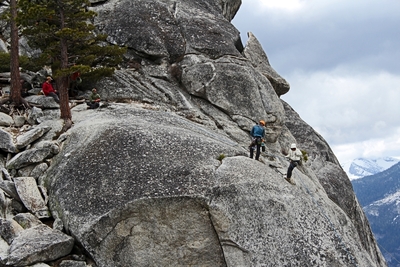 The tree and bolts used to rap down to the Notch 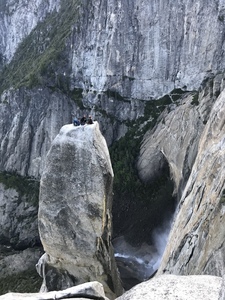 Top of the spire 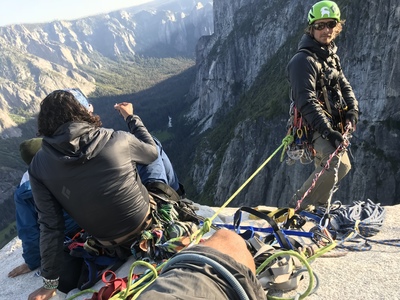 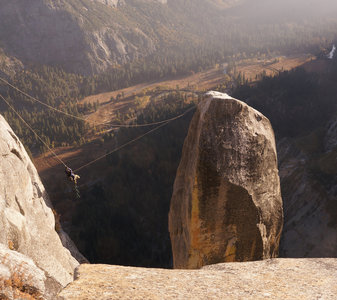 My dad on the Tyrolean! 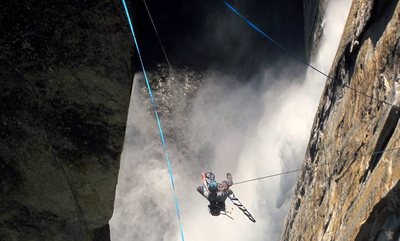 Scott on the Tyrolean - Yosemite Falls were goi…