A nice casual outing. Not much technical climbing, but fun and the summit has a great view. The cruxes are very short and well protected, so it feels easier than the 5.9 grade. Pitch 1 gets all day shade, the rest of the route is in the sun.

P3) Class 1 50' Hike around the corner to the left until you're stopped by a short wall at the head of a gully.

P4) 5.8 50' Climb the wall (10'), set a piece for your follower, and hike down and to the right through some cacti and agave to a bolted belay. Keeping your rope out of the nasty plants may be the crux of the entire climb.

Descent (2 ropes):
Rap 1: 50' From the summit rap to the ledge at the start of the 4th class. Walk clockwise 100'. There is a 2 chain anchor on a ledge about 50' below the summit on the west end of the rock. This anchor is visible from the summit plateau.

Rap 2: 180' CAUTION! 60m ropes do not get you to the next bolted rap station. Rap to the huge ledge 100' down, then continue down the blank face to a bush with slings.

Rap 3: 50' From the bush a short rap gets you to the bolted station.

Park at the Soldier Pass Trail head. Head north down the Soldier Pass jeep road. After a few minutes you'll see Forest Road 9904B on the right and Tea Pot trail on the left. Go left on Tea Pot trail. After a few more minutes look for a small side trail heading right at a group of boulders. This trail will cross a indistinct wash shortly. Go left into this wash and look for a fairly good trail heading toward the nose of Coffee Pot. When the trail gets closest to the spout, leave the trail and head toward the base of the rock. For Original Route contour right around the base of the cliff passing under the Spout Route and an ugly chimney system until you reach a large obvious gully where the cliff turns. Go up this and all the way around until you see a deep chimney/cleft in fairly clean rock. This is the start of the route.
GPS: 34,53.131 N 111,47.554 W 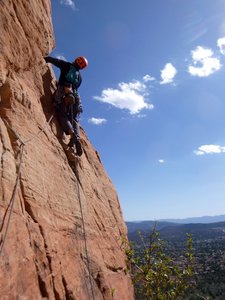 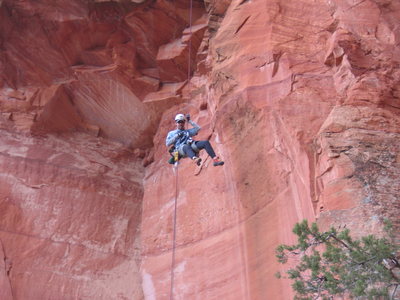 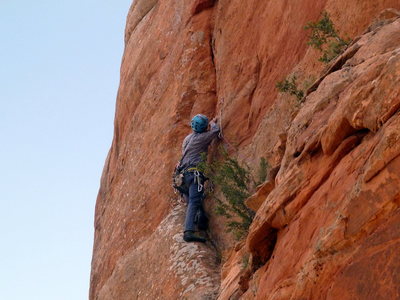 The first bolt on Zach Harrison's line on the n… 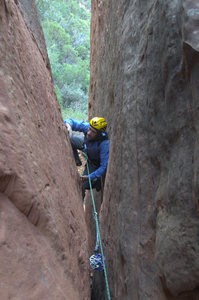 Nestor Garcia in the upper part of first pitch… 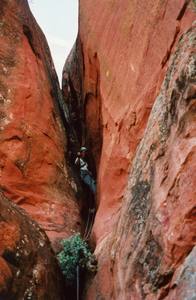 The "Indiana Jones" chimney that starts the route. 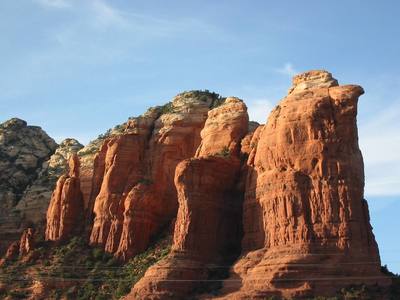