1. Please follow all the rules stated on the kiosk at the base of the cliff.

2. Do not scramble above and try to get down to the top of the bolted climbs to set up topropes - this endangers those below and encourages too much traffic on the top of the cliff.

3. Educational, recreational, and commercial groups may want to use the top of the cliff for rappelling. This is okay if NO ONE else is below and you are using the River Wall, not the Amphitheater Wall. Access the top by walking the trail up the hill at the far West end of the River Wall. Do not let your clients, friends, students run around at the top of the cliff in sight of the houses. Keep everyone chill and out of sight of the houses.

4. Try to use quiet communication when people are setting up or using the amphitheater.

Also: climbing on the Amphitheater Wall is off-limits when shows are happening at the amphitheater during the summer - usually a few afternoons and evenings per week. There is a sign placed when the amphitheater is closed or closes early.

Performance Climbing Park is a mostly sport climbing area that gets its name from Performance Park, the outdoor amphitheater that the cliff is a backdrop for. The overall rock quality is good (River Wall) to great (Amphitheater Wall) but definitely not excellent. The holds can be sharp. The climbs are short - 30-60 feet. Due to the accessibility and location of this cliff, as well as the easy grades, it is sure to become a popular destination.

The wall directly behind the amphitheater is the Amphitheater Wall. This South-facing wall, with concrete flooring, has multiple routes ranging from 5.3 to 5.7 to 5.11. The West-facing wall to looker's left, off the concrete and parallel to the river, is the River Wall. This wall has 5.9 and up.

Bouldering: the entire wall can be traversed. The looker's left end of the River Wall has many boulder problems.

First ascent information and history of the cliff (because many folks have been curious): being downtown and having a wall of decent rock and easy grades, it is highly probable that people have climbed on the cliff for over 100 years, all the way back to the times when Long's Peak was being climbed for the first time and folks were riding in wagons to Estes Park for summer vacations. Throughout the decades, the athletic teenager with a high risk tolerance and an adventurous spirit, and maybe even a couple of drinks in him/her, has probably climbed most of the routes 5.7 and under. In modern times with rock shoes and ropes, the easy slabs and naturally clean lines have been toproped and led by known and unknown climbers. Leo Paik is one such climber who has climbed most of the lines at some point before now, some of which may have been first ascents, or not. Who knows? The first ascent information on each individual route page may say "unknown" if it was most likely done before the modern climbing era, Leo Paik, who did some of the 5.8-5.11 routes in a traditional style or toprope, and/or the person who opened the newest version of the route, which is cleaned, equipped, and created to fit the vision of the Climbing Park.

I approached the Town of Estes Park around one year ago (5/2016) to ask for legal access for climbers. Elizabeth Fogarty (Visit Estes Park) discussed the reasons why the cliff should be opened with Travis Machalek (Town of Estes Park). Travis then went through all the legal issues - this step took the longest. Then I (Mike Lewis) met with Brian Berg, Maintenance Director for the Town of Estes Park, to talk about the safety issues with the cliff, how it would be developed and used, and timing of the project. After some cycles with all of the above mentioned folks, the Town and their legal team finally decided it was a good idea to open the cliff...as long as it was done in a way that was user friendly, minimized vulnerability to hazards and associated risk, kept the Town liability-free, and was in alignment with the direction of the Town's growth.

With the opening of the cliff and the subsequent development of the cliff as a Climbing Park, the cliff has taken on a facelift. With the help of Brian Berg and his maintenance crew, Max Lurie, Bernardo Beteta, Josh Burke, and myself, large boulders and many loose flakes have been cleaned off the walls. I am sure some flakes and crisp edges will still come down as the climbs are cleaned up with the natural traffic of climbing.

The cliff resembles the well-used and beloved cliffs of the Chamonix Valley. The routes are bolted for the climber of the grade. For example, a 5.5 is bolted for a 5.5 leader, not for a 5.11 climber. The first bolts are reachable with stick-clips and are not too far off the deck. Belay/rappel anchors are atop each route and are low enough on the cliff to keep folks from scrambling into the looser areas of the upper cliff, and to reduce poor communication, as well as reduce rope drag when toproping and lowering off climbs (a couple of routes have some drag).

The cliff offers educational opportunities. It is a great place to get those first outdoor sport leads in.

Park at Performance Park in Estes Park. From downtown Estes, continue west on Elkhorn Ave through the little shopping district and soon after passing the end of the shops, you will see Performance Park on your right (north). The Silver Moon Inn is adjacent to the climbing cliff.

So, digging through some old notes, faded photos, and an old log, here are some bits of names, ratings, and information that may be superceded by additional history if it ever surfaces. These lines went to the top of the climbing lines, which are above some of the bolts. There was evidence of slings bits above Shrek suggesting there was earlier climbing here before 2003. 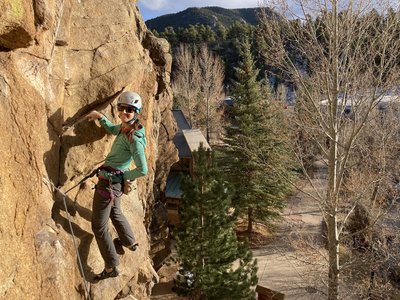 Vanessa Polcari enjoying the view from the summ… 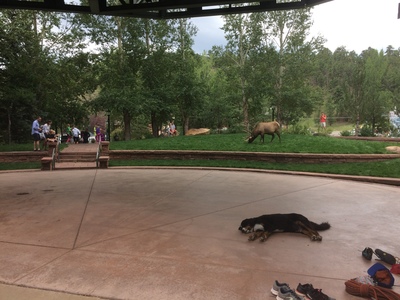 Looking south from the Amphitheater Wall. 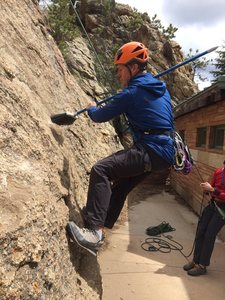 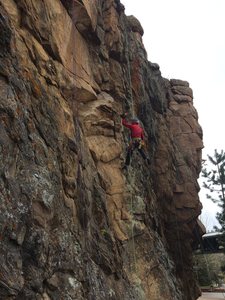 Josh Burke cleaning a route on the River Wall. 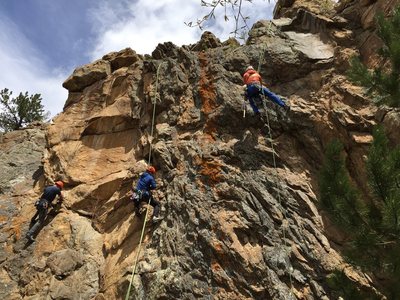 All Photos Within Performance Climbing Park