Tags with route names and grades have been put up Crawdad Canyon style on most of the routes so far. Not all have grades yet but armed with the info here and the tags you can be about 99% certain of which route your on. Also it seems that, baring a massive snowstorm, you'll be able to climb comfortably here all winter.

There are currently around 60 or so established routes here. This area is relatively new and as such don't expect to find a lot of information here on mountain project yet as I'm more interested in route development than writing some pretty description about the route/area and posting inspiring pictures to go along with them. As time allows and I get more material I'll update the area. Until then if your interested pm me and i'll try and help you out.

Pine Valley has seen little attention in the past. Several climbers have rapped in, climbed a few routes, and determined that it's not worth it. Several years ago a couple of local climbers got exited about it and put in a handful of sport and mixed gear routes. As the the vegetation below is thick, requiring lots of bushwacking, their approach to route development was to spot a line from the river, rap in and stop down the area, set the route and then climb out. Development ceased and has seen little activity since then.

In the spring of 2011,armed with clippers, a hand saw, and a lot of time, a trail was built which follows the cliff line. A walk down descent was found and a rope assist put in. After that route development began and is still in progress.

Pine Valley is basalt climbing near a river with ponderosa pine. Mostly sport climbing with a handful of trad lines. This area has a lot more friction than the basalt at blackrocks and is mostly technical face climbing with routes up to 100 ft long. Cliff starts going into the shade around 2 pm and is fully shaded by around 4 pm. Temperatures are typically 15-20 degrees cooler than St George. There is also a good amount of potential for bouldering if one were to do some exploring.

The walls at pine valley from west to east are:
Unemployment wall, The Playpen, Lewis Carroll Wall, Tetas De Cabre (aka goat tits).

This area is still under development and trails are still being established and improved. This also means that routes may still need to be cleaned of dirt, dust, and most importantly loose rocks. This shouldn't be and issue but be safe - bring a helmet and pay attention.
Also if you find fixed gear (ropes, quickdraws, biners) it is probably not booty and was left for a reason.

There are rattlesnakes here. On average they are only a couple feet long and are of the great basin variety. Usually they are very docile and sometimes may not even rattle at you as you pass them by. They haven't (and shouldn't) be a problem just pay attention as you walk and get into your pack. Usually when approached they will slither into a crack or under a rock and hide. Also in the area of snakes is the king snake which is commonly mistaken for the poisonous coral snake. King snakes are constrictors and coinidently eat rattlesnakes.

From St. George head north on SR 18 till you hit the Pine Valley turnoff a few miles outside of Veyo. Head east towards pine valley. Park 5.8 miles up the road at a unmarked road post on the right hand side of the road. Look for rock cairns on the right hand side that mark a faint trail. Follow the trail south to the cliff line and the walk down. Approach time from here is approx. 10 minutes.

For out-of-towners: The turn off of Hwy 18 on Pine Valley highway is past Veyo. After turning off of Hwy 18 I went 5.6 miles (on my odometer) to the post and cairned trail - if you go to far you pass a white railing on the right side of the road and you can see the rocks down below. There is a turn around point 6.0 miles with a large Pine Valley sign.

There are also a few routes with anchors that can be accessed from the top of the cliff line, as well as a dedicated rap anchor. There isn't a defined trail to the rap station yet but the gps coordinates are 37 24.494 N 113 32.187 W. 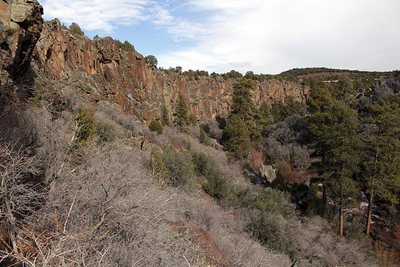 View to the north. Very peaceful. 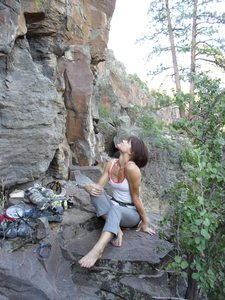 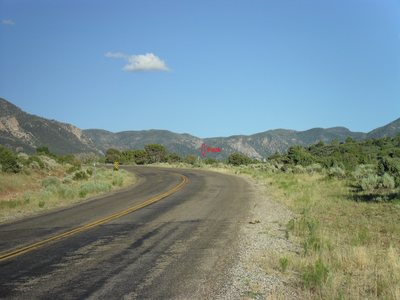 Picture from showing the pullout and start of t… 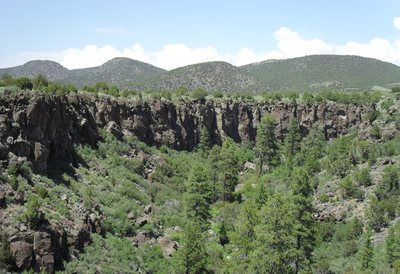 Overview of the whole area taken from across th… 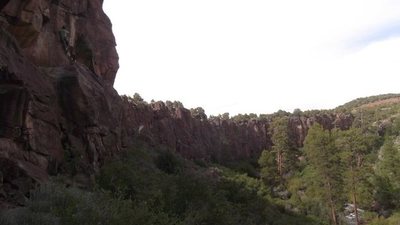 view of the area from the unemployment wall loo… 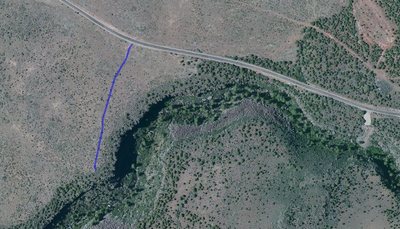 satellite photo showing the path of the trail f…

All Photos Within Pine Valley