See the following site for restriction during the summer: calanques13.com/acces-calan…

Les Calanques is one of those places that is difficult to convey with words: sun-lit white limestone above the crystal blue waters of the Mediterranean Sea. So not only for climbing, also great for hiking and trail-running and kayaking.

The main Calanques cliffs go from the outskirts of the big port city of Marseille to the beach-destination town of Cassis. There are thousands of routes with white buttresses over small sea inlets that offer a fantastic climbing adventure. Both remote and short-approach walls exist. The routes are mostly sport but still many trad, also some deep water solo. Special feature of the Calanques is the number of interesting committing seaside traverses at a variety of climbing difficulties.

National Park: In 2012 much of the Calanques was made into a National Park, which also added some great new multi-pitch cliffs and seaside traverses and DWS on sandstone and puddingstone rock on Cap Canaille east toward the ship-maintenance port of La Ciotat. Though long-term plans have been made (with some restrictions), not much has actually been done (as of 2017) and most of the good climbing sectors are open as before (with similar restrictions).

when to visit: The region around the Calanques is get just about the most sunny days in Europe, so it's a reliable choice -- and a great backup location to have ready in case a different place you wanted gets rainy. Even if the Calanques proper don't have a fit of temperature or wind or rock type for your goals on a particular day, several of the hundreds of crags within two hours drive should have something.

Best times are March - April - early May and late September - October - early November. Bad time is July through mid-September . . . because access to many sectors is closed due to fire hazard, and many of the famous cliffs and seaside traverses face South.

There are often days in late fall and winter wam enough for climbing ... but then often have to deal with the "mistral" wind which blows unimpeded down the Rhone river valley from the north -- solution is to read guidebooks carefully to find out which sectors are sheltered from the wind direction of that day (or visit the big new modern indoor gym). An advantage of the cool season is the narrow curvy roads down to trailhead parking for Sormiou and Morgiou sectors is open unrestricted for nomal tourist visitors.

sectors:
The major sectors for climbing in the Calanques National Park
. . (from West to East) . .
* les Goudes - access from the seaside village of Callelongue, which is reached by driving through the city of Marseille.
* Marseilleveyre - inland terrain includes the highest point in the Calanques park.
* Walkyries (or Melette) - remote seaside area between Les Goudes and Sormiou.
* Sormiou - accessed through the city of Marseille.
* Morgiou - main access through the city of Marseille (though some sectors are more easily reached from Luminy trailhead).
* Luminy (or Sugiton / Candelle) - includes Calanque de Sugiton
* Gardiole - includes Calanque d'En Vau + Eissadon + Castelvieil. Knowledgeable French climbers usually access these sectors from Col de la Gardiole which is between Marseille and Cassis near Col de la Gineste -- but tourists often hike in from the town of Cassis.
* Cassis - a few small sectors near this town with spectacular setting and one of the better sand beaches on this coast (and some tourists assume they should hike in to En Vau from this side).
* Cap Canaille - between the seaside towns os Cassis and La Ciotat, with interesting climbing on sandstone and puddingstone, in addition to the usual Calanques limestone.

traverses seaside:
While just offering bolted limestone routes with a view of big blue water was special thirty-five years ago, what remains unique to the Calanques is the quality and number and size of the its traversing routes. Some of the best ...
Less difficult:
* Traversée Parpeles (one move of 5.7) ... (can be linked with W ridge of Bec de l'Aigle).
* Traversée de l'Extreme Bec de Sormiou (5.7 for the most interesting version, also 5.5) ... (can be linked with Arete de l'Extreme Bec).
* Traversée Ramond (5.7) ... (can be preceded by Traversée des Écureuils or followed by "Au Fil de l'Eau" traverse).
More difficult:
* Traversée de la Commune (5.10a).
* Bora-Bora (5.10d) link-up with Marie Jacqueline (5.9+) ... (or the longest is to extend to 36 pitches of the entire Cap Morgiou).
* "Sans Retour" (5.10c) - notorious for the number of parties over the years who were not fast enough at handling both the difficulty of the climbing and the management of Trad protection, and so spent the night out, or needed to be rescued.

guidebooks:
The "big blue" guidebook is Escalade Les Calanques (FFME topos-calanques.com 2017) is most complete (except omits Cap Canaille) -- best if want single-pitch sport crags as well as famous multi-pitch -- and purchasing supports re-bolting and access. This comprehensive guidebook was recently translated in English (Climbing in the Calanques). see the guidebooks section for online vendors and local shops.

The "select pink" guidebook is Calanques Escalade, by Fenouil + Tassan (www.vtopo.fr 2011). Has the classic multi-pitch routes, better focus on the special seaside traverses, and for DWS, also some great ideas for hikes + scrambles -- and includes Cap Canaille.
- - English-language edition Calanques Climbing now published
. . . (but not available in local shops, so purchase before arriving).

Escalade La Ciotat, by Bernard, Druout, Guigliarelli (www.topo-calanques.com) covers only Cap Canaille (with some great routes of all varieties).

Escalade Plaisir Alpes du Sud, Provence, by Hervé Galley (Editions Olizane, 2007) is a select uuidebook for the much larger region, but for the routes it includes for the Calanques, it usually has the best topo diagrams and most careful descriptions (and of course lots of great ideas for moderate multi-pitch routes for a more wide-ranging visit).

English-language France : Cote d'Azur, by Chris Craggs (Rockfax 2017) does a nice job on the overwhelming task of offering a selection for the much larger region surrounding the Calanques. But to accomplish that it handles the Calanques by offering a select guide to certain sectors - (so it somehow omits the majority of my own favorites). Three big positives are: (a) the sectors chosen are easiest for a visitor to access; (b) an awareness of the other great climbing nearby is good for a visitor; (c) in English and in a quick-comprehension format.

links:
* topo-calanques.com : website for the most complete print guidebooks, also other useful info + links.
* camptocamp.org = "c2c" : the main climbing website for France (and some other western Europe). Route descriptions, reports, forums. Mostly in French, but also English-language descriptions for some popular routes -- need to look carefully on the route page to find the link to the English version.

history: In the 1940s motivated alpinsts including Gaston Rebuffat and Georges Livanos put up numerous classic lines. When the idea of drilling bolts into limestone took off in the 1980s, Les Calanques became a premier European sport-climbing destination. Now thirty years later so many other crags nearby inland have been developed (thousands of routes) with climbing at least as good, the focus on the Calanques has waned for knowledgeable French climbers -- but it remains a special place for seaside climbing for visitors and French alike.

Marseille is the second largest city in France, has a modern airport (MRS) and well linked to the rest of France and western Europe by trains and by high-speed interstates / motorways / autoroutes. If want to combine Alps and Sea in one trip, the Calanques are not much more than four hours driving from Chamonix (with lots of excellent sport crags along the way).

Many sleeping options of different varieties and prices nearby. Where depends on if you have a car, and if you want to favor some specific parts of the Calanques (or Cap Canaille now in the National Park), or if you want to also stay in easy driving range of some of the great inland crags in the region. Without a car, basing in the big city makes sense, then riding the bus (or taxi) to some trailheads. For convenience to other crags, basing to east or northeast near an exit on a main interstate / autoroute (A50 or A50 or A8) makes sense.

The major sectors are well separated, so access to each is different. Easiest for taking the bus is Luminy (for sectors Morgiou + Sugiton + Devenson). Perhaps also Callelongue for the cliffs on the western end. Perhaps Col de la Gineste for Gardiole + En Vau.

Cassis is close to En Vau and Castelviel, but it's still a long hike in and out (overnighting inside the Park is not permitted), and Cassis is mostly an expensive town (with rather good sand beach) for sleeping and eating. Its campground is even farther walk (with a long steep hill) from the trailhead.

Driving + Parking: The Marseille area has a reputation for breaking into vehicles (especially trailheads close to the city), though seems this is not as bad as thirty years ago. Leaving something that looks worth stealing inside a locked car is a likely way to get a window broken. But those using good strategies to avoid break-ins have often been successful in the years since 2005.

The roads down to the Sormiou and Morgiou trailheads are narrow asphalt with very steep and tight curves, so for many days of the year they are closed to most vehicles lacking a special permit. Also it requires tricky navigation through severakl miles of busy city streets just to reach the top of those roads -- make sure to have a good GPS track or smartphone app before trying.

Mountain Project's determination of the classic, most popular, highest rated climbing routes in this area.
More Classic Climbs in Calanques » 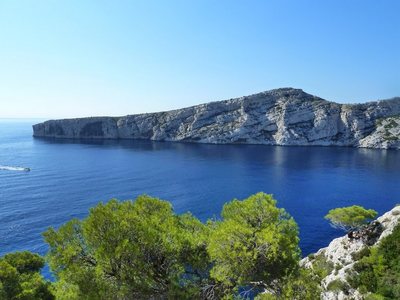 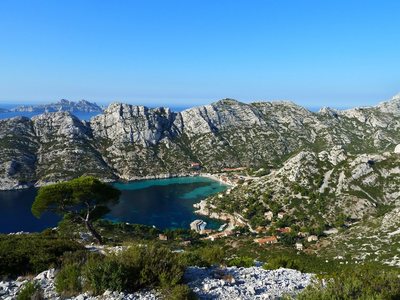 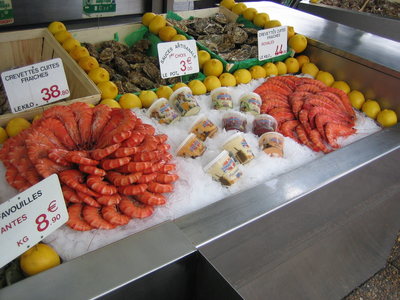 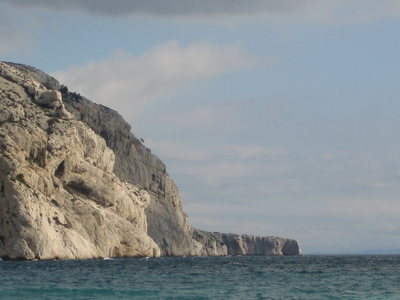 One of many cliff lines above the sea.

All Photos Within Calanques