South facing granite extrusion with horizontal cracked ledges. Many 150ft sections to climb along the rock bands of mostly white Quartzite like rock that are separated by narrow wooded gullies. Very steep, clean, solid, most climbs are very protective and very easily climbed (the hardest being about 5.6). Deceiving because from the ground they look challenging. Can be seen from route 25 in East Haverhill in the far away distance north is the distinctive ridge line. Also lower in this area west is a long slab on Black Mountain that I have heard has been climbed but I haven't and don't know how besides climbing Black Mountain trail and descending from it's summit to get there. Not much to climb on Black Mountain summit ledges. Four of us did top rope some short climbs there in 1981.
I am not going to list all the climbs that I did on Hogsback. There were about a bakers dozen or more. I'll just say that I went up every rock band originally as free solos. The central section does have some short finger cracks for the start but after the cracks are slabs to climb that are a bit problematic because of accumulation of pine needles. Jim Shimberg joined me once for a day of doing the climbs that I thought were the best in 1987. Great view in all directions from the ridges top.

Take Lime Kiln Road to the right turn onto Page Road until you can turn left onto Blueberry Mt. Road and park where you can legally park. Hike north east at least four miles hoping you don't miss it. Best done when there are no leaves on the trees. I went in the late fall. Should pass by a junk yard of dozens of model T fords. Hardwood forest and many rolling hills. It's a bitch or epic to get to it. Good luck. 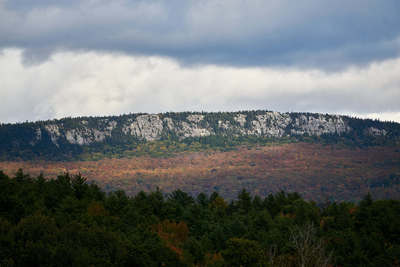 Cliffs on the Hogsback 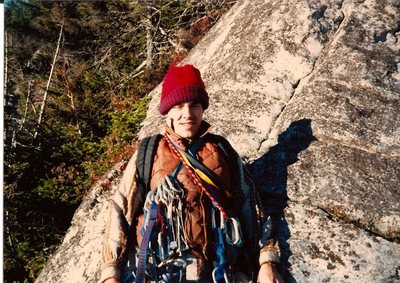 Scanned photo. I'm at the base in the morning.… 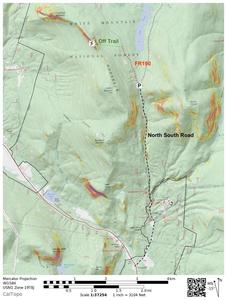 A map of CWoodman's described approach beta (I…

All Photos Within Mount HogsBack