Routes in Buckley's Mine Wall

Buckleys Mine is located high on the north side of the canyon. The mine itself is now gated. There is a single, bolted sport route to the right of the mine entrance that follows a striking, light blue streak on the limestone.

There is a tree to the right of the mine entrance that looks quite out-of-place. Probably planted by Buckley, whoever he was.

Approximately an hour from the parking lot, Buckleys Mine requires some fortitude to reach. Hike up the canyon past the first bridge.

The second gully on the left (if I remember correctly) contains a large talus field. Hike up the talus field and turn left at the top of the gully when the wall is reached.

Passing the Blue Wall routes on the right, continue on a faded trail west around several outcroppings and through several gullys. There is one location that requires a tiny bit of down climbing using your hands. It isnt always obvious where the trail continues when crossing the various talus fields; it is generally best to walk straight across the talus and find the trail on the other side. (If you walk uphill along the side of the talus as I did youll waste effort.)

Eventually youll come around a point and Buckleys Mine will be obvious in front of you and to your right. The mine and route are reached on a slope above a short cliff; climb the lower-angled rock on the right of the cliff. The route itself is about twenty feet right of the mine entrance. 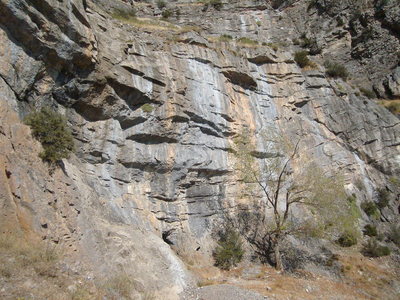 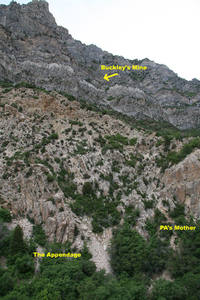 Buckley's Mine from the canyon floor.

A wider-angle photo of Buckley's Mine. 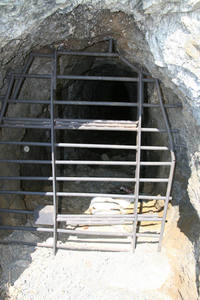 The entrance to Buckley's Mine, including a you… 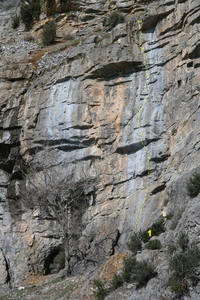 Buckley's Mine Wall 1 We're Not in Kansas Any…

All Photos Within Buckley's Mine Wall


More About Buckley's Mine Wall