Sherwood Forest is the collective name given to the relativly untrodden area on the South Rim. Though there are few routes in this area, the quality of the routes compensates for the lack of them. Due to the reclusive nature of these routes they can get licheny and dirty.

From the main parking lot at Castlewood's Southern entrance, take the Lake Gulch Trail to a point where it turns left and starts descending. At this juncture, several hundred yards down the trail, go straight into the grassy field and head North. When you see the power line, which is the start of Sherwood Forest, go to the cliff top. A down/up climb can be found here. I would recommend approaching the climbs from bottom, since they are not as troublesome to find. 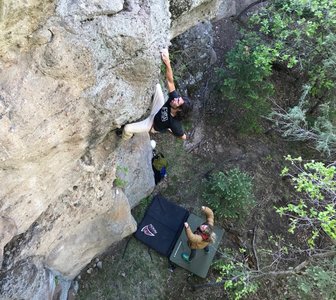 On the FA. Photo by Jeremy Bauman.

All Photos Within Sherwood Forest