Areas in The Narrows

The Narrows is a loose, scruffy area close to Carbondale, Colorado, that, for us Rifle burn-outs, has become a sort of sanctuary. Though your overall impression of the stone whilst whipping past at 70 mph on your way to the Redstone boulders will be less than stellar, the climbing itself is good, and takes place on walls invisible from the highway.

The rock is a fractured sort of granite, grey-green in hue, with black streaks coursing down the slabbier walls. The cliffs themselves are not unlike a multi-faceted sea wall holding back an ocean of scree. Ironically, however, the scree is produced by the decomposing sea wall itself. It is prone, in certain "high-danger" spots, to sloughing off great chunks, daggers and grey-green cobble-eggs that could certainly deflower even the sturdiest of climbing helmets, and the contents therein. Fortunately, for us, we need only walk under these heinous sectors of wall to reach the good, water-polished stone that has yielded all of this year's new routes.

That said, however, there is some great after-work-type climbing here: one-pitch sport and trad routes from 5.8+ to 5.13c. It is also a great area in the summer, as it's very shady and always breezy, especially in the depths of the Narrows Proper.

I don't have exact mileage, but the deal is this: If you get to Redstone (15 miles from Carbondale?), you've gone too far. The beta is this: Driving south on CO 133, you'll first pass through an area of red rocks and sand, big ol' Mount Sopris looming high on your left. After a bit, however, the canyon begins to narrow, and you'll see a band of shattered whitish rock coming up fast, limning the two sides of the canyon. This is the Narrows, basically knows as such because it's also the narrowest point in the canyon. Drive slowly past the rocks and, just before the cliffs on your right peter out, locate a HUGE, I mean HUGE, parking lot on the left. This is the parking lot for the free hot springs. I've never been down in the springs, but there's them that have. Not for me. I just park and get my climbing stuff and get gone.

Walk back down-canyon (north), hugging the guard rail or, for safety, walking in the bushes behind it, for roughly 50 yards, until the roadcut to your left (esentially the west side of the highway) goes from vertical to the slabby and you spot a cairned, convenient ingress. The trail here is a bit raw, but basically follows the "old game track" up the hill as it switches-back, bringing you ever closer to the rocks, which will be on your right. After about 20 minutes of this, you'll reach a fork, hard at the toe of an appealing red-and-brown buttres. Head up and left to reach BJ's area (5.8 sport, 5.10+ sport, 5.11 sport). Otherwise head right to reach the Narrows Proper, a deep, shadowy slot offering bouldering traverses, sport routes (5.11a, 5.13b) and trad pitches (5.8+, 5.10a, 5.10+, 5.13c) on nearly bomber water-polished rock.

Classic Climbing Routes at The Narrows

Mountain Project's determination of the classic, most popular, highest rated climbing routes in this area.
More Classic Climbs in The Narrows » 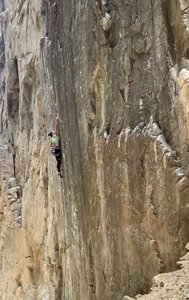 All Photos Within The Narrows


More About The Narrows