Probably the most popular of the "serious" Canadian Rockies routes.  This is undoubtedly due to the easy approach, straightforward descent, world class climbing, and solid pro at the hard parts (by Rockies standards anyway).

Ascend the moderate initial slopes of the couloir until below an unappealing chimney.  Known as the "Hockey Stick Crack"  because the first ascent party was unsuccessful in climbing it the first time around due to a lack of gear to protect it.  They returned with a sawn off hockey stick which was used as a primitive Big Bro.

If you forgot your hockey stick, or just don't like unappealing chimneys, traverse 2 pitches right to a short rock wall with a snow band that runs across the NE face at its top.  Reasonably protected 5.9 climbing leads up to this snow band.  Traverse 2 pitches left back into the couloir, which is actually a vertical rock corner at this point.

Climb the 5.11a, M6, or A1 (your choice) corner on solid rock & reasonable gear to a belay stance. Continue up the corner with less difficulty into the upper couloir.  Motor on up until it steepens into a headwall, with mixed/ice climbing on its right side.  This is a super cool spot, with very rewarding climbing up mixed ground that becomes vertical ice for a short section and overlooks a lot of space.  Go from the vertical to the horizontal as you top out on the ice cap.

Rejoice!, then head over to the AA col to your left, down the glacier, back to the road and your car.

Half way along the NE Face; pretty obvious.

Standard rack (might include a sawn off hockey stick) and ice screws. 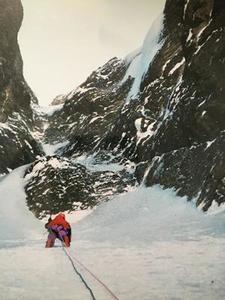 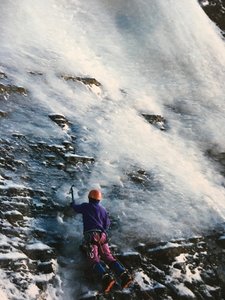 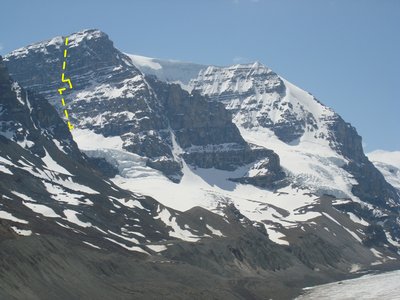 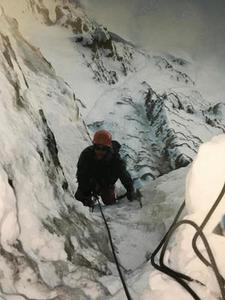 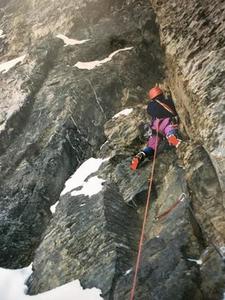 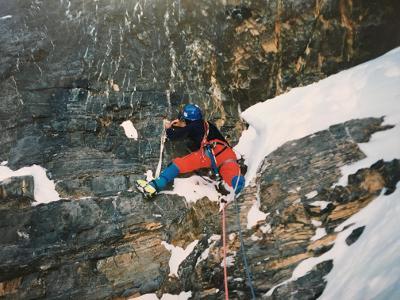