Routes in The West Slabs

This isn't a new route per-say, but a loop traverse link-up of The West Slabs and the Traverse of the Goddesses allowing for a terrific car to car adventure encompassing all the summits of the Olympus massif, all without a car shuttle (the more recently added section of the Bonneville Shoreline Trail makes this possible). With scrambling routes all the rage these days, this route makes a fine combination of hiking and climbing and is really just begging for a time battle. It is a far better way to get off the West Slabs than the traditional decent anyhow, so why wouldn't you?

Note: This route will be very time consuming if not done as a solo for the majority of the climbing sections.

Start at the Mt. Olympus Trailhead on Wasatch Blvd. Hike up the trail for a half mile or so and then turn left and follow the Bonneville Shoreline Trail around to the north side of the mountain.

After about 2.25 miles veer right off the BST onto the social trail that leads up to the West Slabs Gully.

Climb the gully (when there is snow in spring crampons are helpful) and then climb the West Slabs (see west slabs description on other page).

At the top of the slabs follow the ridge east to the northern most summit of the Goddess group of peaks. Work south toward the South Summit, tagging ALL of the Goddess peaks along the way. Some route finding is certainly required here, but you can traverse the peaks without dropping much lower than the saddles between them at the posted grade. There are many variations of how to get from one peak to the next- be prepared for exposed 5.5 down climbing and consider having a rope to rap or belay if you are unfamiliar with the area or squeamish- on the south side of Hestia (the peak just north of the true South Summit) is probably the most challenging section. Fixed anchor slings come and go here, so be prepared for that if you plan to rap. If you are crafty, 50m of rope should get you down this section in a couple raps with some additional down climbing. Or just find a better route through the maze.

Once on the South Summit follow the trail back to the car.

Route is about 4700' vertical over 8 miles. Don't forget to summit ALL six peak.

For time reference:
I did this route solo recently in 5:24 with over an hour of idle time for photos, eats, getting crampons on and off, etc. I was not trying super hard to go fast as it was HOT. I did know the route fairly well though and moved fairly efficiently. This included 50 min to climb up the actual West Slabs and 1:15 to hike down the trail off the South Summit. I am reasonably fit and a 5.10-11 climber, but certainly not a speed freak runner by any means. I had a 50m 8mm rope with me and never used it- that said, my previous couple times in the area I rapped down some of Hestia.

By comparison, a few years ago I guided a reasonably fit individual on this route in 12 hours. This included pitching out the West Slabs and lots of rope-work to reach the South Summit. I think it actually would have been hard to do it too much faster with the rope used as much as it was on that occasion.

I'm not trying to tempt anyone (actually I am) but I bet this could go car to car sub 3hr if a fit and confident climber really wanted to torture oneself! Jared Campbell did a variation of this route (short-cut out all the goddess peaks and went straight to the South Summit after ascending the West Slabs) in 2:13:23 (6/12/15)

Enjoy. And watch out for snakes!!!

•Consider bringing a rope for the ability to rap in the Goddess Peaks zone- 50m should do there as well as some webbing for anchors.

•If you plan to pitch out the West Slabs, having a 60m rope and a light alpine rack: 0.2 - #1, doubles 0.3-0.4 are handy, 4-6 alpine draws, anchor slings or cord. I have not had great success with nuts in this area though a few small-medium sizes could prove useful. In general, gear on the slabs isn't awesome, but there is enough to safely bring up a weaker second.

•If there is snow in the West Slabs approach gully, light crampons and possibly a light axe are a good idea. A single collapsible pole is nice for the steep trail down or for use coming up on snow as a supplement to, or substitute for, an axe. 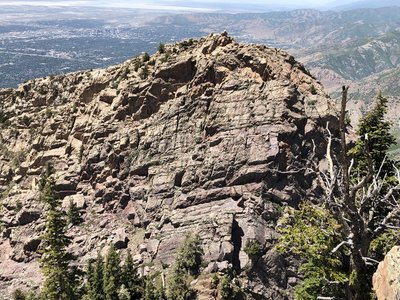 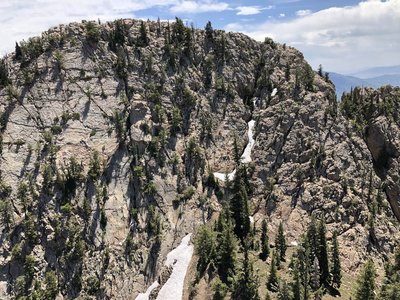 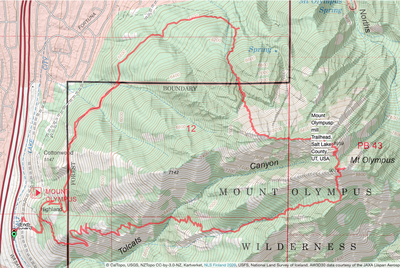