I have often felt that Island Block had opportunities for further route development, so I've been keeping my eyes open. While climbing in the alley I spotted a new line that looked interesting. We set up a top rope and I gave it a go, eventually successful climbing and topping out the route. The route was then also climbed successfully by one of my partners.

During our climbs there was no indication that this particular route had ever been climbed before. It isn't listed as a route anywhere that I can find. Maybe someone climbed it once upon a time, but if they did it has been lost to history.

I'm counting it as a new route/first ascent unless evidence to the contrary arises. I'm naming it "Acrobat," since it requires some creative and athletic movements, especially at the low, overhanging crux. Myself and one of my partners both felt it was about a 5.6, clearly harder than 5.5 "Alt Access" and about the same difficulty as 5.6 "Lean Across."

If you are climbing in the area the new Acrobat route is definitely worth checking out. Combined with the other routes on this face (Alt Access, Lean Across, The Arete), the alley section of Island Block can be a productive destination that offers a step up in difficulty from the more accessible and often crowded areas. The short free solo or Trad lead to the top of the block tends to keep the total newbie/tennis shoe grade riff-raff away. Even on the busiest of weekends, you can be almost certain of having free reign over the entire Island Block area.

Located on Island Block in the narrow alley on the west side. It is approximately 20 feet left of "Rigging Route", left of and almost underneath the "Alt Access" ledge, starting at ground level. Look for a recess in the wall and a 5.2ish staircase up to a small overhang. Pull the overhang, take a step to the right, and continue upward through an obviously less mossy path.

Note: Fully topping out requires digging fingers into the dirt covered top of Island Block. We did it, but it isn't necessary for a standard top rope climb. The route is perfectly climbable right now and as clean as most McConnell’s lines. With a little bit of traffic the route should only become nicer.

The route can be top roped using trees, but does require significant sling extensions in order to place the anchor near or over the cliff edge. Otherwise you have some drag that while manageable can be annoying.

This route would be a daring lead as there are few protection opportunities near the low, awkward, and overhanging crux. It technically awaits a First Free Ascent, but like many McConnell’s top rope routes I'm not expecting it to see much Trad action. 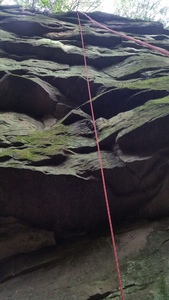 Acrobat as viewed from near the start. 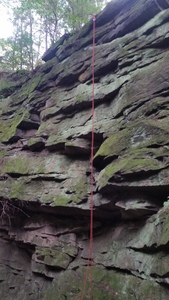 Acrobat all set up for top rope (as viewed from…