Access Issue: road into crater closed. refugio closed. must start with hike into crater from gate outside crater rim. Details

There used to be two refugios available for climbers at the gate but as of March 2016, they are no longer accessible to non-government employees. Also, the road that used to go all the way into the crater to the lakes is also closed about 2 miles prior to it reaching the lakes. The only way to access the lakes via this road is by hiking in or mountain bike. The easiest access point to the crater is to drive to the high gate and hike over the rim. This will provide you access to both routes, Pico de Fraile and Pico de Aguila.

If you're coming from sea level, the crux is likely acclimatizing. Depending on if snow is present, some of the boulder field traverses to the summits of Campanario Mayor and Pico de Fraile and down their back sides could be the technical crux. Some scree and loose boulders but otherwise, great rock quality. Some exposure but nothing paranoia inducing.

From Lago del Luna (the smaller and bluer of the two crater lakes), follow the fairly well defined trail leading south and then west up about 500 vertical feet of easy snow (in winter and spring months) to the first of three peaks on the way to Pico de Fraile. Ascend the first peak (Pico Campanario Menor - 4380 meters), which has a large white cross on top of it, the second (Pico Campanario Mayor - 4450 meters), which has a post in the ground that had presumable been a cross in the past, and finally Pico de Fraile - 4690 meters, the summit of which has no markings other than the thin air above your head when you reach it. After the super fun 4th class rock scramble (beginning with the ascent of Pico Campanario Mayor) for approx 1000 ft, the descent was my favorite part. Descend the north side of Pico de Fraile to a chute and glissade down (if snow) or scree slide down to the vegetated boulder field below.

No gear required. If snow present, crampons and ice ax. 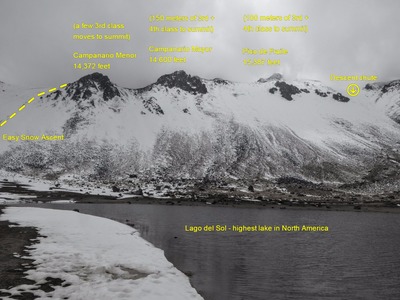 The ridge traverse from left to right to Pico d… 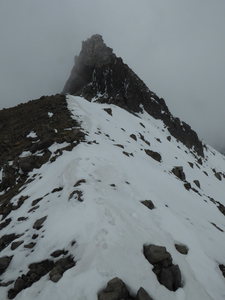 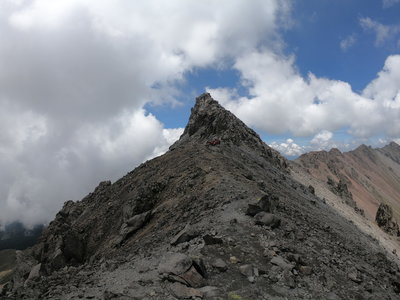