In '94, on the right side of the North Buttress of Begguya, Scott Backes and Mark Twight looked for weaknesses in the wall where they could move quickly. Meanwhile, Greg Child and Michael Kennedy worked their way up the Wall of Shadows on the blankest sections of the buttress. In the end both teams sent their new routes with different tactics but good efforts all around.

The F.A. of Deprivation required a 72 hour push with descent via the West ridge. They decided to forego the summit after traversing the summit plateau.

Seldom repeated, this wall is seeing faster and more frequent ascents, and may eventually become a 'super-alpine' classic. In 2008 Zoe Hart and Max Turgeon made a 23 hour ascent from the bergschrund to the cornice at the top of the buttress, and then continued to the summit.

In 2012, Colin Haley creatively linked new terrain in the first band with parts of Deprivation and the gully on the right edge of the buttress, the Björnberg-Ireland. This avoids cruxes but keeps you closer to numerous seracs, and is thus best suited to a quick style. He self-belayed short sections and sometimes trailed a rope and hauled his pack. This represented the first solo of the North Buttress, but he was forced to bail 100m from the summit.

In 2017 he repeated his effort with greater speed and skill, this time committed to free-soloing the entire way, with a lighter pack and no stove, taking it all the way to the summit. His time splits represent not only records for the buttress, but for the entire mountain: 5:18 bergschrund-to-cornice-bivy, 7:47 bergschrund-to-summit, 15:22 round-trip from bergschrund, 17:13 round-trip from base camp. It's hard to imagine things progressing much further than this.

With light tactics, good conditions, and an early crux it may be the quickest route on the wall. Many parties treat the north buttress like a crag, rappelling after the difficulty declines. It can be about the climbing, about the summit, about all of it, or about none of it. whatever. Thou shalt not judge thy neighbor in matters of style. But the memory is immeasurably sweeter if you take it to the top...

On the wall, their line breaks the first rockband with a direct path up a corner system. After that, the line zig-zags through a complicated path of least resistance. Through the final headwall, they steered clear of the Bibler exit, taking their line to the far right to establish an independant finish in a steep corner system. They stated difficulties of AK 6, A2+, 95 degree ice, and 95 degree drytooling.

The first rockband likely presents the crux. At the base of the corner system, head left toward a broken crack. This section is at nearly even height with the Prow pitch on the Moonflower. The right option is sometimes clogged with snow mushrooms but if it has ice this is the line of weakness. We were forced to go left. We followed and led free (if dry-tooling counts as free to you), there is crux climbing in an over-vertical seam that felt like at least M6(originally A2+), mostly on small but decent gear, with pin-scars in coarse grained granite providing deep pick placements. We fixed an angle(unintentionally), which is now one of two or three fixed pieces in this crack. The dry-tooling takes you through a minor roof and back right into thin vertical ice in an oblique corner. In this section we encountered about 2 bodylengths of 95 degree neve with a consistency similar to crusty mashed potatoes, splattered and partly-frozen over blank granite. At this point the last reliable piece is far enough down as to be worth forgetting about. Be sure to link the drytooling into the thin ice, for about a 50 meter pitch. If you stop to belay earlier, as some parties have, it may be on a bad anchor. This pitch is sensitive to temperatures and conditions; many capable parties have turned around here. It's recommended to climb it during the coldest hours of "night". In very good conditions it could be trivial with the line of weakness being an ice smear to the right of the seam. Without this ice in place, We found it engaging. After this, several pitches of sustained climbing in a very steep(sections over vert, stemming oppurtunities) but straightforward ice gulley takes you to the first ice-band.

The bulk of the climbing from this point, while not straightforward in terms of routefinding, is mostly non-technical. From the first ice-band to the second, the route follows a ramp system with good mixed climbing and brief cruxes to M4 AI4.

To gain the leftward zig-zag leading to the third ice band, there is a short passage through a section of broken rock. If melted out, people have reported 80 degree climbing on unprotectable choss. We found it coated with ice making for relatively tame mixed climbing. Through the leftward traverse it is possible to move quickly on 45 degree snow.

From the start of the final iceband, it is possible to continue hard-right to the 1994 finish. The first ascensionists encountered 2-3 long pitches of 80-90 degree mixed climbing, labeled 'hard' in the hand drawn topo. The Bibler exit, with a very brief section of 5.9/WI5, in the form of an ice-filled offwidth, is a much easier finish (and dare I say less contrived). It's reached by going left around a short rockband and then heading up and slightly right to reach the major weakness in the final rockband.

From either exit 500 feet of 55 degree ice leads to the cornice and the top of the buttress. From the cornice, on the upper Northeast ridge, 1800 vertical feet (in 0.7 horizontal miles) of climbing on alternating snow aretes, short ice steps to 60 degrees, and broad avalanche-prone slopes lead to the summit of Mount Hunter.

North Buttress of Begguya, or Mount Hunter (14,573')
Upper SE Fork of the Kahiltna Glacier
a 90 min ski from Denali Base Camp

Far right on the buttress, but safely left of the seracs. While it is on the North Butt, it has more of a West/NW aspect, so expect strong afternoon sun.

emphasize small rock gear, brassies, light rack of cams from #00 C3 to #2 camalot. Enough ice screws for long simul-blocks. two KBs and some small angles. a large pecker or spectre would have been nice for the mixed crux.

The name is in reference to the style of ascent. All subsequent ascents have also been in single push style, and they're getting pretty quick. Expect to find nowhere to stop, unless you want to chop a ledge. Most of the route is good terrain for simuling.

Bring a very detailed topo or route photo, the line is harder to follow up high.

This aspect of the buttress gets more sun than the Bibler Klewin and way more than the '84 French Route. This means that the crux ice is likely to be gone by earlier, like by late May.

or via the upper West Ridge/Ramen Couloir.
(Mostly walking and easy downclimbing, with 6-10 rappels. faster but can be more involved, requires an inobvious bypass of an icefall above the main Kahiltna and a slog around the whole massif) 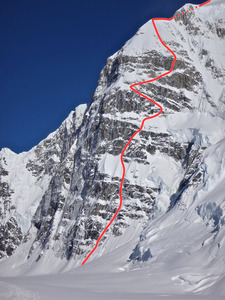 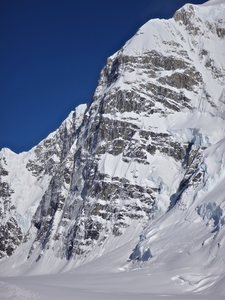 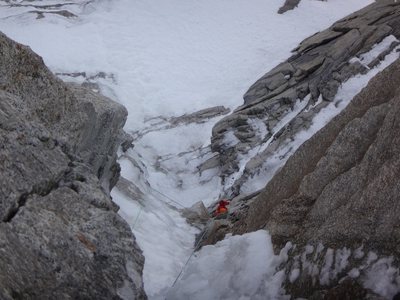 looking down the crux corner 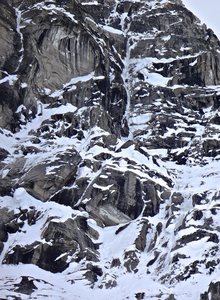 The passage through the 1st rock band, unformed… 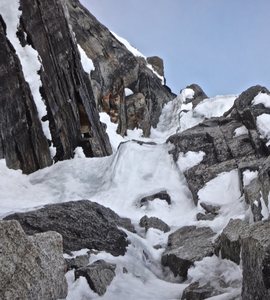 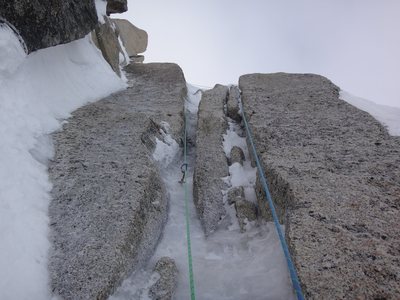 Following the bibler exit. Took us 21 hrs to ge…