Follow directions from KIA (below) and cache the sleds on the Glacier at the foot of the Northwest Basin (ABC on the route pic). The route winds through the crevasse field at the foot of the Northwest Basin, there is objective hazard from the seracs on either side of the basin. Careful routefinding is needed to avoid the icefall zones while navigating around the crevasses. This is highest risk of rock or icefall on the entire route. Avalanche risk is a different story on the many traverses and cornice crossings to come. Cache the skis or snowshoes and don crampons after the crevasse field when the route heads left and climbs steep snow along the base of a rock band. At the top of this rock band the route crosses a sharp ridgeline to a flat area suitable for a camp at about 9500 ft (Camp 1 on the route pic). Above camp 1 continue uphill and cross a small 'schrund to follow the rock band traverse on the left side of the basin to the base of the "Entrance Couloir" at the head of the basin. Here the climbing gets steeper and transitions from snow to snice to glacier ice over a distance of about 1000 ft. Two tools and ice protection are necessary for the upper portion of the Entrance Couloir, which is the technical crux of the route. Just above the Entrance Couloir at about 10,200 ft is an area suitable for another camp (Camp 2 on the route pic). Above Camp 2 the route joins up with the original Beckey Route and ascends the rock at the right of the huge cornice above Camp 2 to gain the actual lower West Ridge. From here there is a fairly short and flat traverse that actually descends a few hundred feet to reach "High Camp" near the base of "The Shield" - a single pitch ice wall that must be climbed to reach the upper portions of the West Ridge and the summit. This was as far as we got due to weather, although the rest of the route above the high camp is typically done in one long summit day and consists of deep snow travel across corniced ridges, a long pre-summit plateau, another 'schrund, and a final steep ascent to the summit itself. The descent from high camp back to KIA can also be done in one very long day. There is also a very accurate view of the route on Google Earth, just search Mt Hunter Alaska. The success rate on Hunter is lower than the WB with less than 40% of the attempts reaching the summit, mostly due to weather or deep snow on the upper ridge.

How to reach the route from Kahiltna Base Camp

Begin at the KIA and head down Heartbreak Hill towards the Kahiltna. Head left on the main glacier where the West Butt Route breaks right towards Ski Hill. Pass around the "riblet" that is directly across the landing strip from KIA and head up the first small fork off the Kahiltna on the left. Proceed to the large Basin on the right which is the beginning of the route. It is about 3 miles from the KIA (see route pic)

Standard allotment of snow pickets and ice screws. A rack of nuts is useful to place running pro in the finger cracks along the base of rock band in the Northwest Basin. You can cache these at camp 2. You may find a few fixed anchors in the rock along the sides of the entrance couloir. Be ready to make lots of V-threads. 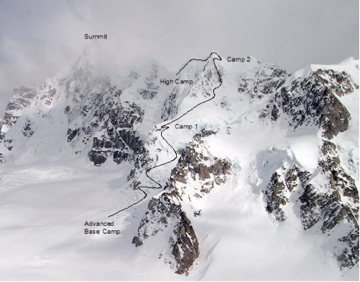 The route as seen on the flight in. Thanks to… 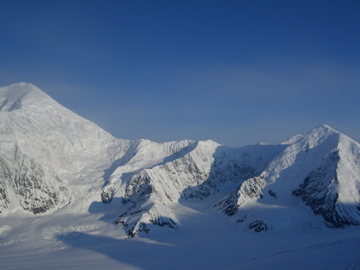 The Sultana Ridge from the west Ridge 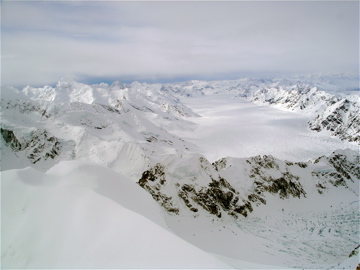 Looking down the Kahiltna from the West Ridge 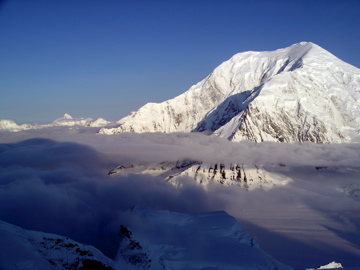 View of Foraker from Camp2 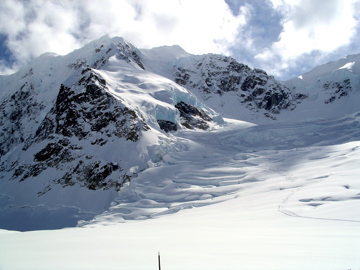 The base of the Northwest Basin 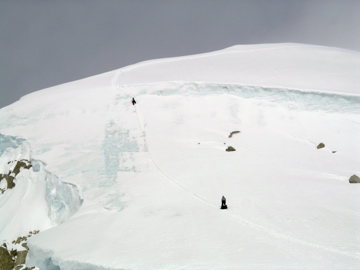 Close up of climbers on the Shield 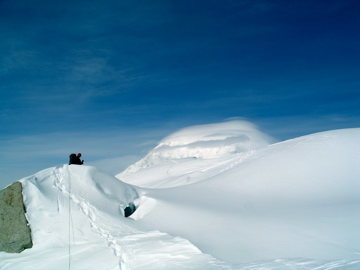 Looking back towards Foraker in lenticular clou… 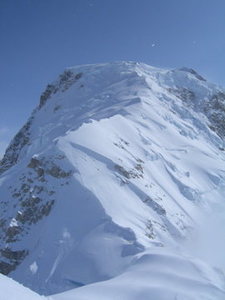 View of the Upper West Ridge 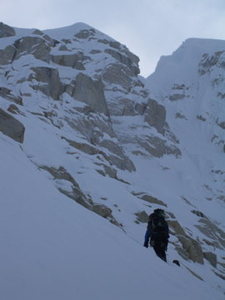 Approaching the base of the Entrance Couloir 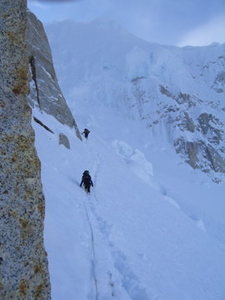 Along the traverse towards the base of the "Ent… 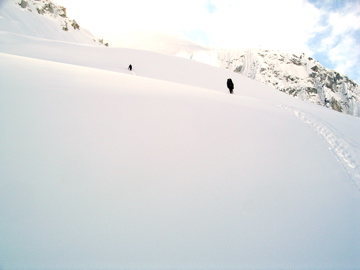 Ascending out of Camp 1 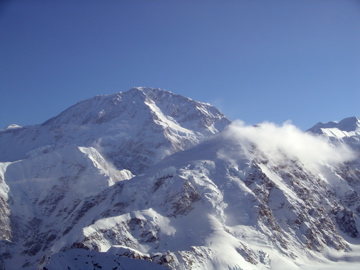 View of Denali and Cassin Ridge at sunrise from…