CLIMB: Hacker's Tower in the lower end of the canyon.

DESCRIPTION: This formidable and fantastic tower currently has only one line on it, though there are other possibilities. The current line is out of the vision of most of the hiker traffic well below in the canyon. To reach the climb, hike up the canyon about a mile, passing many great climbing possibilities until you are just under the southeast corner of Hackers Tower. Follow the faint trail, cairns, and the line of least resistance up to the northeast corner where the staging area is located.

SEASON: Maybe February to June depending on the cold or the heat.

Pitch I: Code Walker is by design a circuitous route that walks its way around the tower (see topo below). It starts on a hook on the east wall in a small cut out which eventually becomes the east/north wall arête. After gaining some height in aiders, sew up some small cracks and start free climbing. After placing a bit more pro you gain the arête and clip the only bolt on the east face and pull around to the north side on to a dark band (presumably/hopefully more iron) that diagonals slightly up and across the north face. Move cautiously right through the band clipping bolts. Like most rock stars, leave the band clipping the eighth and final bolt of the pitch prior to climbing up and right at the north/west wall arête where you reach a two bolt belay on a small four inch wide stance that is about five feet in length. This ends the first pitch.

Pitch II: Head straight up clipping bolts in the direction of a protruding shoulder formation. The bolt line takes you left around this bulge passing pockets where a BD #5, and #4, respectively, and optional, can be used and should be runnered. These placements are not in the best of rock (NOTE THE CAM SCARS). Gain the top of this formation and head up and right toward the obvious weakness in the cap rock. The climbing so far on this second pitch is almost entirely in aiders. Get use to that top step. Follow the line to the overhanging cap rock and two (thank god) small ledges, clipping the final or 12th bolt of pitch II, moving up and over to the glorious summit. A register is attached to the two bolt anchor. Have the second bring up the camera to take some shots up and down the red rock ribbon gently winding well below. The canyon takes the water of the Hackberry toward the Paria and eventually the Colorado River at Lees Ferry and on to Mexico, though sadly, no longer to the Sea of Cortez. The sparkling waters, green shimmers of the Cottonwoods, juxtaposed against the red, the blue sky, and drifting white clouds make for a euphoric summit experience.

DESCENT: Rap off of the north face with two 60 meter ropes and back to the staging area.

About a mile into the lower end of the canyon. You can not miss it!
Work up the faint trail following cairns to the northeast corner.

GEAR: An assortment of small wires and cams (Metolious 00), singles of BD .5 through a 5, some kind of aid hook(s) (a Talon works well) aiders, 16 quick draws, 5 shoulder length and 2 long runners. Two 60 meter ropes.
RATING: 5.9+ C2 The first pitch can go almost entirely free at 5.11 with the exception of the first moves. If you bail at the end of this pitch you will need two ropes to reach the bottom of the west side. The second pitch is almost entirely in aiders and also needs two ropes to rap and reach the north side staging area. 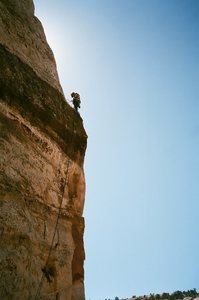 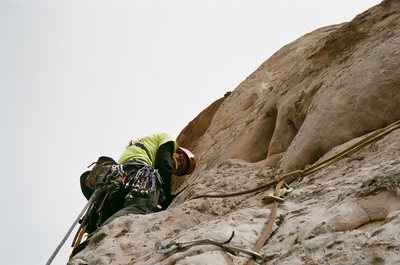 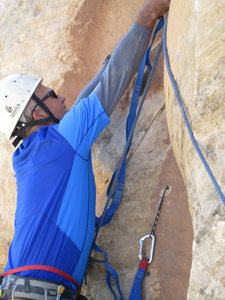 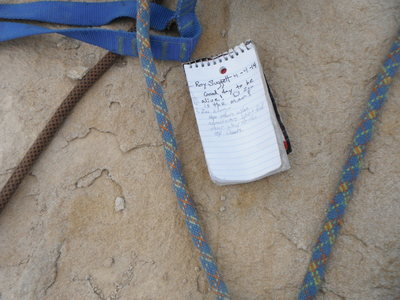 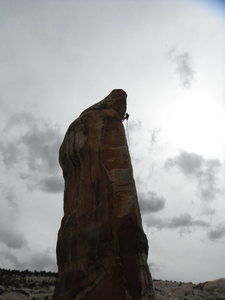 Northeast or short side of Hacker's Tower and R… 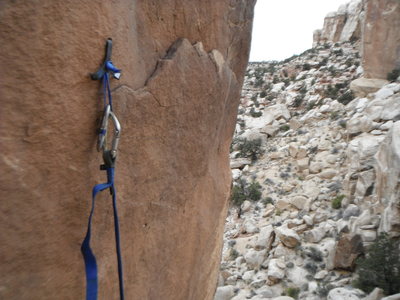 Small natural pockets were great for setting a… 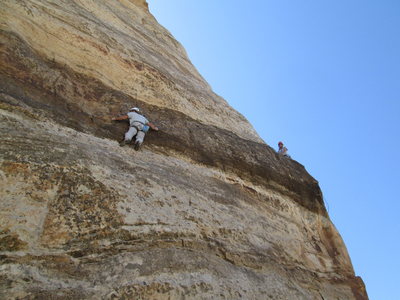 Airy all the way and changes every time a new p… 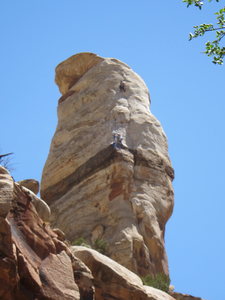 Super fun aid ladder climb, no pro needed if yo… 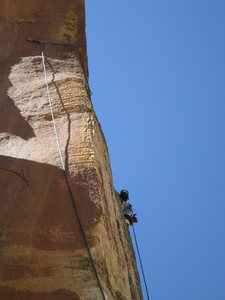 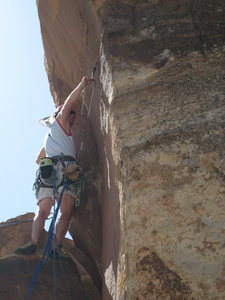 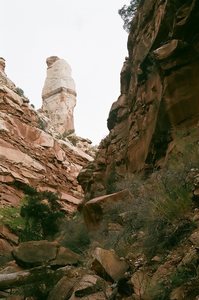