Each year more people in the climbing community discover the great winter bouldering of Moes Valley in St. George Utah. This area is fast becoming a premiere winter destination for an ever growing number of road trippers, weekenders, and climbers interested in trading deep snow drifts for warm desert stone. What most visitors (and admittedly many locals) do not know is that Moes Valley is owned by a state trust organization known as SITLA.

Most locals in this part of the state just assume that if it doesn't have houses on it then it must be owned by the BLM. We made just that assumption when the potential of Moes valley was being re-discovered in early 2001. Upon the realization that the entire basin could become a housing development, we formed the Southern Utah Climbers Coalition (yes it spells SUCC) as a means of representing the interests of the local community, and opened a dialog with SITLA.

4 years, and many meetings later Moes valley and the Bloomington mesa will be annexed into the city of st. George and maintained as open space for the many forms of recreation that take place out there. With mountain biking on the Zen Trail, sport climbing on the Zen wall, myriad hiking trails as well as some of the best bouldering around, this formation offers outdoor enthusiasts a diverse and convenient venue for the pursuit of our various passions.

As the popularity of Moes has increased, so has the number of people camping out at the parking area, driving up the wash to the Sentinel, or around the saddle to the TP boulders and upper basin. There is a fire pit at every major concentration of boulders, litter around the boulders, and tire tracks just about any where you could possibly drive a pickup, SUV or ATV. We are suggesting to the climbing/bouldering community that this is an unacceptable and unnecessary impact to an area that we have worked hard to protect. The hike from the end of the road to the furthest boulder cant be more than 15 minutes. Of course when you have to bring in firewood that is a long way, so why not, like- not have a fire. The fire rings create the impression that camping at the base of the boulders is acceptable, it isn't. It is worth remembering that these kinds of behaviors were undoubtedly among some of the reasons for the closing of Hueco tanks, and the Black Velvet camping in Red Rocks. It makes our community look bad in the eyes of the landowners, land managers and other users of the area.

We are beginning the process of working with the BLM to identify appropriate areas that are close enough to Moes valley and appropriate for the kind of camping that someone on a road trip would do (fire pit, dogs, cathole ect) In the meantime, if everyone who visits Moes would take some of this advice to heart and pass the word it would help our cause, and improve our image with people whos opinion of our community standards really does matter.

Sit start on mega vertical jug, move left and traverse rail to the point where you can move to the single crimp in the middle of the face(about 4ish feet above the rail), move to lip and top out.

Crash pad. Be aware of the boulder behind the problem. It shouldn't be much of a problem but anything can happen. 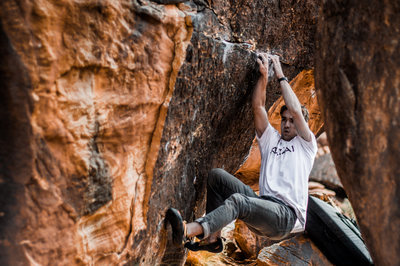 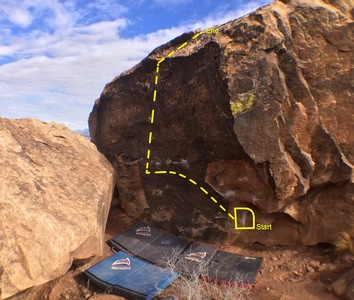 This is the problem. 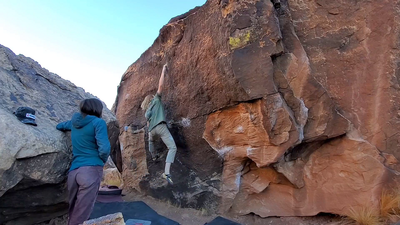 Jumping instead of using a heel