Routes in The Vortex

An unlovely-looking route with a chossy start and seemingly way too many bolts; Reel Value grows on you.

The line has got some stellar moves and feels remarkably exposed.

There are two roofs, a mostly-footless bulge, and three good rests. The technical crux is at the top and may prove a bit perplexing at first. The rightward trending first 20 feet or so is the chossiest; once above the initial roof the rock quality improves significantly (but it's still AF—the route needs more traffic to really clean up).

The right-most line at The Vortex.

15 bolts, chain anchors (vertically offset a bit, so you may want a long draw and a short draw).

Fifteen bolts seems like a lot for the length of the route, but once you're on the route they make perfect sense.

When Boyle originally bolted the line there were only 9 bolts. A local climber, however, suffered a injurious ledge fall from the second bolt when a hold broke. Subsequently the route was retro-bolted to mostly eliminate the possibility of injury. 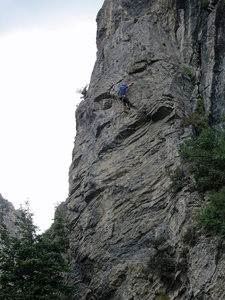