This route climbs a trio of very nice clean cracks on the front of the NE Arete. If you like hand and fist cracks, this is for you. Pitches 2 and 4 are very striking splitters.

Post script. I recently found these comments referencing the route.

The route up the white streak on the steep face is the Screaming Sky Crack I think, which is the route Carl and I used to make what we think is the first 1 day ascent of Zoro, August 14th 1994. There is a small write up in Rock and Ice #64 from Nov/Dec 1994. 22 and a half hours car to car-
Carl had scoped the route prior at least 2 times and knew where to go- He asked me and we sent on his third attempt- I think the first attempt was with Bill Hatcher and the second attempt was with Dave Willey- I assuredly had an advantage because of Carl's prior knowledge of the long approach. We were also friends and climbing partners. We left at 8 PM went down the South Kaibab to Phantom then up Bright Angel to Clear Creek up to Sumner Wash and through the Supai etc. Long and Amazing day and was cooked for days after. At the time I was sewing for Deucy at A5 and essentially living out of my car and the shop- Deucy was OK with that- I would recommend a 3 day trip-
Sincerely,
Eric Meudt

And
FYI the "way steep headwall" part of the first rappell is an alternate route that starts around left of the NE arete and follows beautiful cracks to a ridge that leads to the base of the steep headwall. You crank up the headwall via splitter hands to fingers past a block (5.11) then fists to the rim. It's and awesome pitch in a wild setting! Carl Tobin was involved with the first ascent...called it the "sky crack", or something like that. He and I did the second ascent in 27 hrs round trip from the S. Kaibab trailhead in like AUG '96 or '97. He went back the next week and did it in 23 hrs? Three ascents in 3 weeks.

Three ascents in three weeks, are you kidding? No, this route is that good, go do it! If this route was in Sedona, it would have been climbed in the early 80's and would be one of the best routes in the area. In my opinion, as good as it gets for a desert tower route. But the approach...
We replaced the summit register 4/15, its under a mini cairn on the south side of the summit as you can finally see into the main canyon.

The route is on the outside of the nose of the NE Arete. Start East of the NE Arete route, look for a recent rockfall roof 30 feet up. A low angle ramp starts at the same spot and heads up and left. This is the first ascent route of Zoroaster. There is a very old bolt about 50 feet up this ramp.

Good gear throughout except on pitch 3, which is very easy. 1X fingers to thin hards, 2-3X hands and fists, 1-2 offwidth pieces. No bolts.
There is a crushed hex in the crack on the last pitch, I doubt it is worth much as pro. The hex has "Gary Doyle" inscribed on it. One 70m mandatory for rappels. 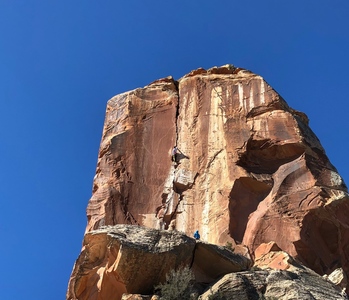 Tim Keyt on the headwall of SSC 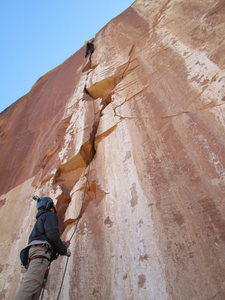 Tim up high on the incredible headwall 4th pitch. 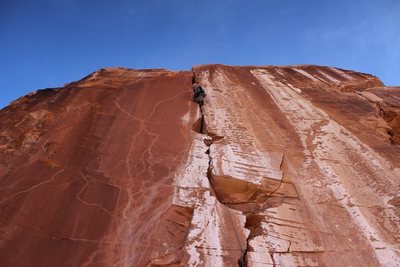 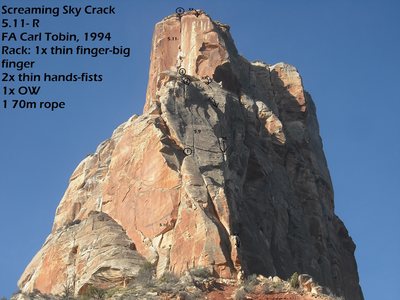 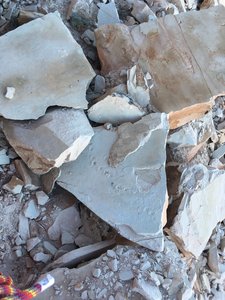 As you walk around the corner to the sky crack,… 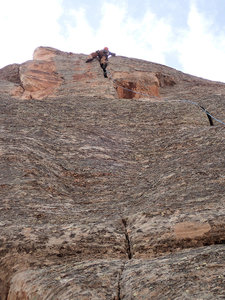 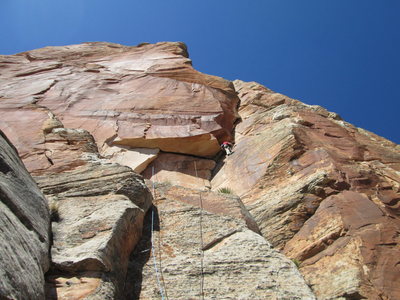 Pitch 1: Getting out of the roof and into the u… 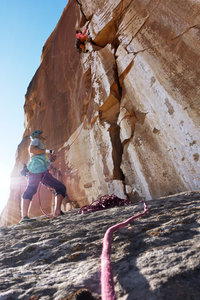 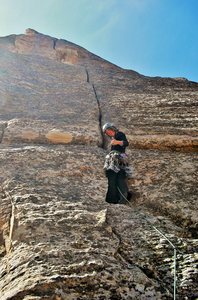 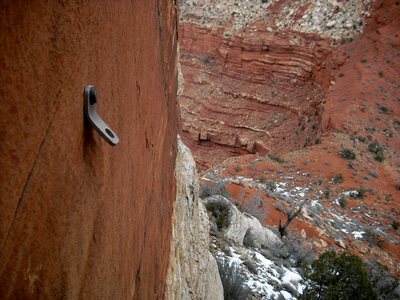 Bolt on first pitch of first ascent route on NE…