Among the temples in the Grand Canyon, Zoroaster is undoubtably the king of the technical rock climbs. This is probably mostly due to the 32 miles of round trip hiking or the 20,000 feet of elevation gain and loss from the rim that it takes to reach the top of Zoro. Whatever the reason, a wide variety of climbers have traveled to the Big Ditch to have a go at Zoro.

Phantom Ranch to Redwall Notch:
From Phantom Ranch, hike up North Kaibab Trail a short distance to turnoff to Clear Creek Trail. Hike east on Clear Creek Trail. A good campsite (no water) is less than 2 miles from Phantom Ranch along this trail, just past the two large cairns on opposite sides of the trail. For camping reservations, this campsite is within the Clear Creek Use Area. The Clear Creek trail crosses a fork of Sumner Wash which originates at the notch in the Redwall. If you have a GPS mark this as a waypoint since the Clear Creek Trail was hard to spot in the dark upon return. Hike up the wash to notch in Redwall. We scrambled over and around rocks in the wash to get to the notch. However, on the way down from the notch we did pick up a faint trail that was very occasionally marked by cairns which made its way down the alluvial fans next to the wash and was much easier traveling. Keep an eye out for this trail as it will make life easier in both directions.

Redwall Notch:
As you approach the steep chimney in the Redwall you will see a fixed line. As soon as this line is in sight, stop and look to the immediate right for a cairn that points to a route (Class 3/4) that climbs up the broken face outside and to the right of the chimney. There are several cairns along this short route as you scramble up short broken rock shelves. This route leads you back to the chimney at or slightly above the anchor for the fixed line. I know of two other climbing parties that climbed the chimney by the fixed rope, using the fixed rope for a self belay, and I was told it went at 5.7.
Above the fixed rope, move to the left side of the notch and climb the left side (Class 4) past the steep chimney with the chockstone at the top. Note the rap anchors on climbers right above this Class 4 section if you dont want to down climb it on the way back to camp. Continue up inside notch through loose dirt and rocks for a couple hundred feet to the top of the notch. When we descended, we rappelled down the Class 4 section and the fixed line.

Traverse to Upper Supai Cliff Band:
After getting up the lower Supai cliff bands, there is a long ridge-top traverse (with a great view) to the large upper Supai cliff band. Along the way you will scrabble up some short cliff bands. When you arrive at the base of this cliff band, walk left along base of cliff (NW side) for about 1/3 mile. There is a faint trail with occasional cairns. Be mindful to keep your footing, as you are traversing along a scree/dirt slope with a cliff drop-off to your left. Some cairns will direct you up towards a terraced section in the cliff band. You'll finally reach a fixed rope up a slab--batman up this rope. Work your way up and right to the next fixed line (knotted rope), with another batman up another slab. Make your way up to another fixed line, where you have a choice to batman up a knotted rope on vertical rock, or (to the right of this) batman up a slab, then a traverse left along the fixed rope. We chose the latter, but the traverse was a little awkward. In the vicinity of this last fixed line there is a rappel sling around a tree for descent. Note your location again, as this is difficult to find if it is dark.

Upper Supai Cliff Band to NE Arete:
Climb up the steep dirt/scree slope to the base of the Coconino formation. We saw some cairns but could not consistently stay on a trail. Walk left along the base of the Coconino until you arrive at the NE arete of the formation which is in line with the saddle between Zoroaster and Brahma Temples. The approach, from the campsite mentioned above, took us 4.5 hours at a comfortable pace.

NE Arete Climb:
Rock Climbing Arizona by Stewart Green has a route description (6 pitches) and a route drawing. Both are not accurate in our opinion so we have added some more route beta here. For more information there is also a good trip report at: supertopo.com/climbing/thre…;>>>>
We used 60 m double ropes and linked the first two pitches from Rock Climbing Arizona which resulted in a total of 5 pitches. There are no bolts at the belay stations except for one bolt at the top of pitch 4 (horn belay). There are no rappel chains, only slings.

Pitch 1: There are no aid moves on this pitch as indicated in Rock Climbing Arizona. Climb up and right to the rock scar and set a cam (see above link for photo looking up the climb). Climb over small roof on either side using the cracks. Continue up and right following crack system past one or two small trees with rappel slings. You are heading for a small tree in the crack system that has rappel slings just before the crack becomes more like a seam. The small tree of interest also has a smaller tree/bush 2 feet to climbers right, both are used for the anchor for this rappel station. Beyond these trees the crack system thins out as it angles more to the right. Note that this is the fourth and final rap station you will use on descent. This pitch moves up and to the right, but the drawing in Rock Climbing Arizona shows the route as more straight up than its actual path. (5.7)

Pitch 2: There used to be a Needles Eye chimney on this pitch but the associated pinnacle fell off. This pitch is now the crux at least technically and mentally. Follow crack/seam to the right and get a big cam (e.g. Camalot #3) in the final pod before the crack/seam disappears. Climb up face, using crimpers (climbers right) on the fresh rock scar from the missing pinnacle. Beware of the loose rock block on climbers right. Now you are 10 to 15 feet above and right of your cam and youre on sandy rock and no immediate pro options. Now is not the time to think about how far from camp you are, let alone civilization. A stretch to climbers left is a small horizontal crack long enough to fit a small cam (e.g. TCU #3) and your fingers. Stretch left and get the cam in! Sink your fingers and pull left to get your feet onto a low angle slab. Move left on slab and then chose from one of the two vertical cracks to climb up about 15 feet to the next belay stance (we climbed the left one). There is a bushy tree on the ledge that you will have to make your way around when you get there. This tree has rappel slings on it and is the third rappel station for the descent. This ledge is about 10 feet deep and 15 feet wide. The second climber should clean the small cam in the horizontal crack after they have traversed to the lower angle slab to avoid a large pendulum if they fall. (5.9+)

Pitch 3: Move to climbers right along the ledge to the left-facing corner with the crack system. Looking up, you will see a large roof up and to climbers left that you will climb up to. Climb this crack system for a long pitch. The crack system actually turns into two cracks (we climbed the right most and larger crack). This pitch ends at the awesome horn belay that you can straddle like a horse and take in the view as you belay your partner. This is the second rappel station for your descent. (5.8)

Pitch 4: Down-climb below the horn on climbers right to a short and wide low angle slab for your feet and traverse to climbers right to the large chimney. As you arrive at the chimney there is a bolt, below head level, with a bent aluminum plate with a hole in it for a hanger. When you find it, you will be amazed at how invisible it is until you are next to it. The hole in the hanger is small and Ive read that you need a carabiner without a gate tab to clip into it. I used a Petzel Classic Straight Gate Carabiner and it fit. Clip the bolt and make your next choice. Above about 20 feet and to the right, in the chimney, is a hole in the rock with slings. This is your next pro. You can climb the face above you on small holds (5.8R) or get into the chimney and chimney up to the slings (5.8). We did the chimney route which had an exciting entrance into the chimney which is protected by the bolt. Get a crimp with the left hand and stretch out across the chimney with your right leg for a foothold. Look down and checkout the view. Chimney up to slings and clip a runner to them. Mantle onto the ledge at climbers right and traverse under a block. Climb up block to ledge and walk left to crack and build your belay anchor. (5.8)

Pitch 5: The off-width crack pitch. This pitch has plenty of protection opportunities with cams (e.g. Camalots #1-#4) and is not R-rated as stated in Rock Climbing Arizona. You will burn some calories on this pitch but the short off-width section does have some fist and hand jams deep inside the crack. As you reach the top of the crack have your belayer move under the small roof near the base of the pitch (for protection against any falling rocks) because the last part of this pitch has loose rocks at the bottom of the now gaping and low-angle crack that you will climb up through. Belay from small tree above and back away from the crack. The first descent rappel station is on a rock block at or just below your level, out of sight, and to the NE of your position. (5.9)

Toroweap Summit Cap:
Once the technical climbing is done, there is still the summit cap to negotiate. Walk to the right along the base of the formation and walk/scramble up an easy notch to the top. What an incredible summit! What an adventure! Photo document, sign the register, take in the view, and get the hell out of there before the sun sets! 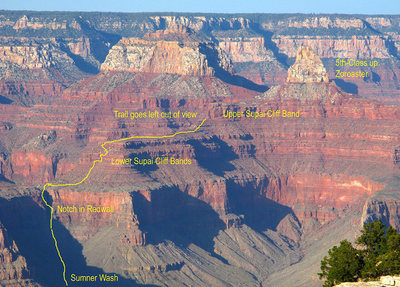 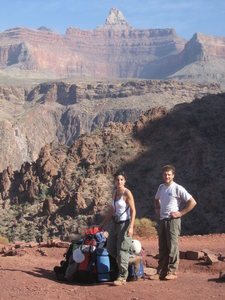 The climbers and the climb. Halfway down to the… 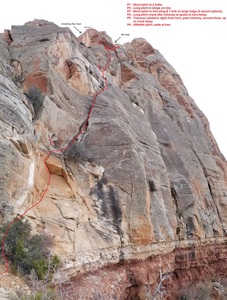 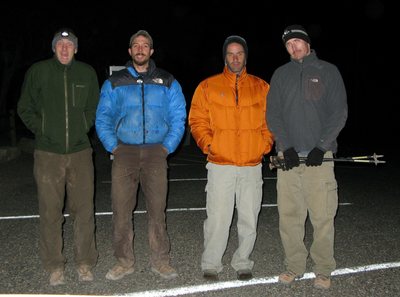 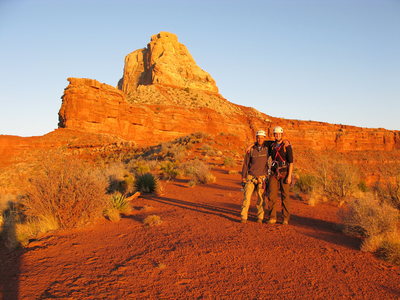 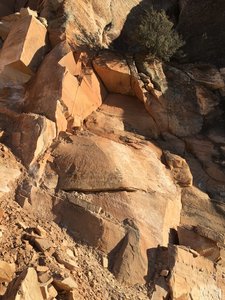 This is what the first pitch looks like now. I'… 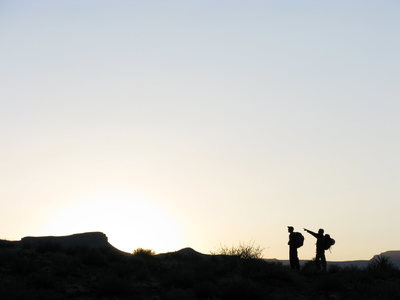 Dawn on the approach 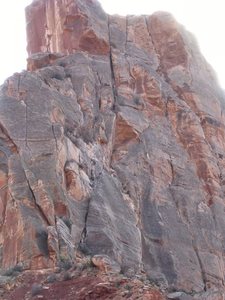 Jacek on the Airy Traverse, Jeff belaying above… 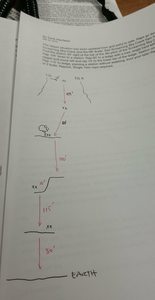 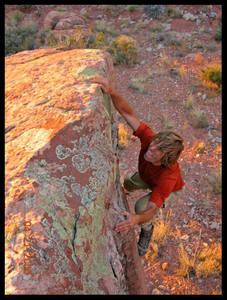 At the commonly used bivy site there is a cool… 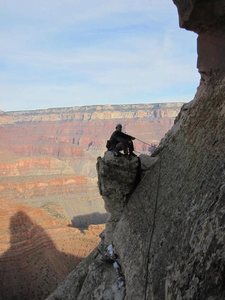 Belay station for the travers (also the second… 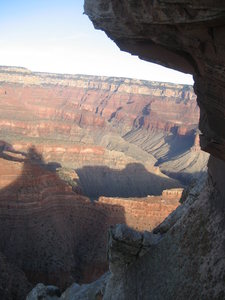 Looking down after the traverse pitch. (see pre…