From the AAJ Reference:

"In late August, 2000 Nick Tomlin and Scotty Nelson spent 8 days on Pulau Tioman, an island off the eastern coast of Malaysia, making the first ascent of the impressive Bukit Nekek Semekut, one of two peaks on the islands southern tip known collectively as the Dragons Horns. Our route, Waking Dream (V 5.9 A2) climbs the prominent 400 meter south face of the jungle spire, and required 4 nights on the wall in portaledges. To the best of our knowledge this was the first ascent of the mountain.

The 10 pitch line required the drilling of 10 rivets and 8 bolts (for belays), in addition to the bolts already in place on pitches 1-4 from our previous attempts (1996 and 1998). The rock is of relatively good quality granite, and our line follows the most obvious weakness up the face. We placed a handful of pins; the route will go clean very easily.

We endured one particularly terrifying lightning storm on the third night; other than that we had excellent weather. Pitch 5 was the crux, where Nick Tomlin drilled 5 rivets to reach a thin crack, and then used aliens, hooks, micro nuts and a very sketchy tricam placement to lead us onto the lower angled upper portion of the wall (pitches 3-5 are vertical to slightly overhanging). Pitches 7-10 were climbed in a summit push on the last day, and involved mostly free climbing interspersed with some aid. Pitch 9 involved spectacular runnout 5.9 face climbing on funky dimples and scoops in a water groove. The top was spectacular, a perfectly flat bonzai garden with stupendous views of the ocean, the islands interior, and the surrounding peaks. We stacked a cairn on the summit boulder and snapped some photos before rappelling to our portaledge on top of pitch 7 for the night, and then to the ground the next day.

This is probably one of the longest rock climbs in S.E. Asia, and one of the only big walls. The climb has a relatively easy approach, great exposure, and interesting climbing in an exotic locale (the views are great!). Care should be taken by prospective future ascentionists, though: the bolts we placed were not stainless steel, and are likely to rust quickly in the ocean air."

This party (David Trippett) attempted the third ascent overall of this route and managed to free a bolt ladder. This route may go free with a variation or two. 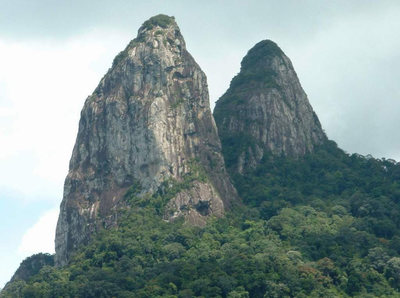 The Dragon's Horns in all their glory. 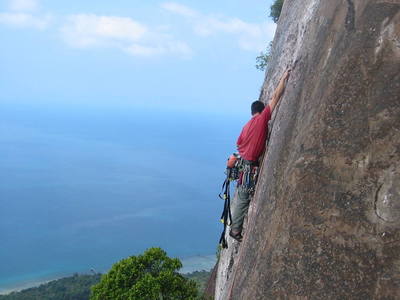 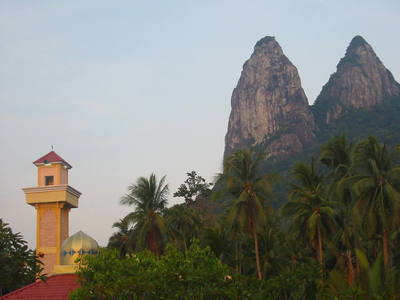