This classic route deserves a spot on every aspiring alpine climber's to-do list. The ridge offers sustained moderate difficulty with over 4000 ft of vertical rise in an amazing setting. The rock quality is generally good and objective danger acceptably low.

Joe Puryear's guidebook has a very detailed description and topo. Here's a summary that's meant to supplement that description.

- Between 8,000' and 9,000' climb a series of rock steps (up to 5.8) with moderate-angle snow in between. Traverse left or right as necessary to find the easiest line. Partway up this section move left around the ridge crest (exposed) and climb the "Thin Man's Squeeze", a narrow chimney between two large blocks. Then climb a short 5.8 pitch on the RHS of a large headwall to reach a snow ramp that descends to the 1st col (good bivy site, but look out for crevasses).

- From the 1st col climb a steeping snow/ice slope (up to 55 degrees), then follow a snow arete and traverse L into a snow gully, the "S-Couloir". Part-way up the couloir at 9,700' is the "Grey Rock". Underneath this is a bivy ledge with enough room for two 2-person tents.

- Continue up the S-Couloir and climb a short 5.8 rock pitch on the RHS of "The Thumb" (large pinnacle). Downclimb and traverse to a rappel station, then rap 100' into the 2nd col at 10,000'. With enough snow it may be possible to dig a tent platform here. Beware of cornices. Retreat would be difficult once you've rapped into the col.

- From the 2nd col climb a rock face and an awkward L-leaning crack ("The Slot", 5.8, technical crux). Follow a corniced snow ridge for a couple of rope-lengths to a small pinnacle. Puryear's guidebook cover photo was taken from here. Downclimb 40' to the right (Puryear's guidebook say to rappel), then climb a short mixed gully (not as steep as it looks from the pinnacle). Continue up the final rock pitch (5.8). Exit R near the top.

- Continue up a a snowy ridge, traverse R to bypass a rock step, continue up a 45 degree snow gully (small bivy ledge near the top), then climb about 500' of 50-55 degree snow/ice to reach the summit. The summit is a large, flat snowfield that makes an exposed but otherwise good bivy site.

- From the summit head SE, bypassing a bergschrund. Traverse, downclimb and/or rappel diagonally across 40-50 degree snow/ice slopes below the ridge crest for about a half-mile to reach a small rock outcrop. Make two more rappels down snow/ice slopes to a level shoulder at 10,200' (good bivy site, but look out for cornices).

- At the end of the shoulder make about a dozen rappels off rock anchors down the steepening S ridge, traversing between rappels if necessary to regain the ridge crest. At the base of the ridge make one or two rappels down snow slopes, then rappel or jump across a bergschrund to reach the glacier. Head SW down the glacier to return to base camp, making a wide detour to minimize exposure to icefall risk from a hanging glacier higher up.

An alpine rock rack, pickets and 4-6 ice screws. Most of the climbing is on rock and snow, but ice screws may be needed for the final 500' and the upper part of the descent.

An alpine rock rack and pickets. A small selection of ice screws may be needed but most climbing is on snow or rock. 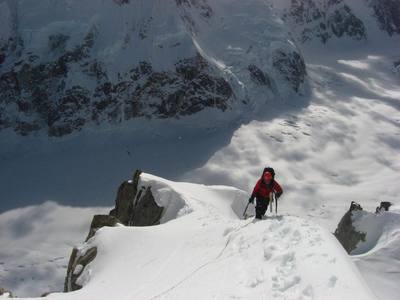 Ty Cook high on the Southwest Ridge of Peak 11,… 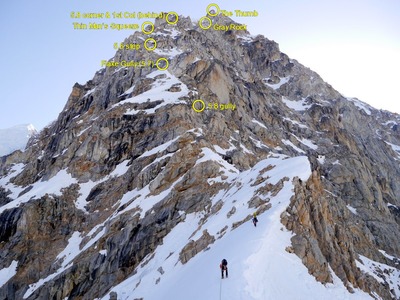 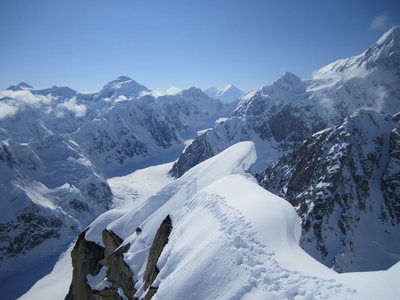 Taken from around the same spot as the Puryear…

The North Face of Mt. Huntington taken from cam… 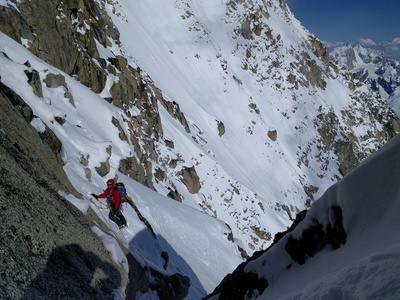 Ryan setting some pro on the traverse just befo… 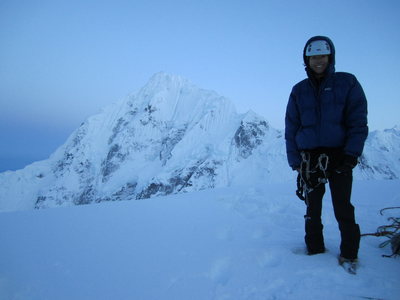 Me at the first col with Huntington in the back… 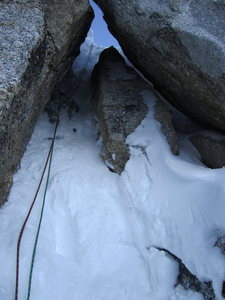 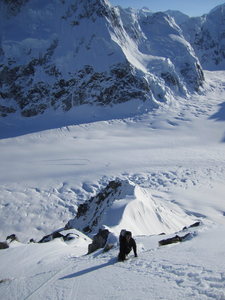 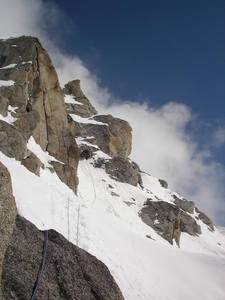 Ty Cook leading one of the crux rock section on… 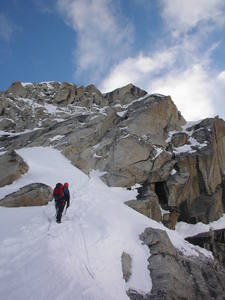 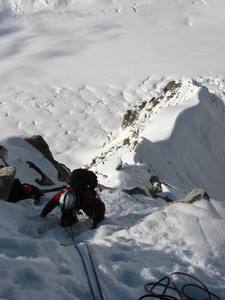 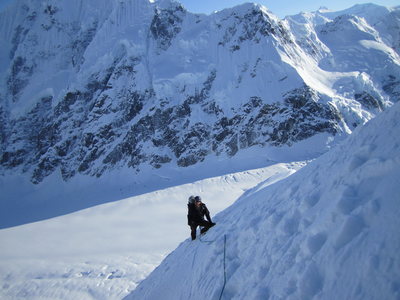