You can read about the warning here. There is extensive rebolting being done by the Thaitanium Project, which has already rebolted the vast majority of popular routes in the main areas. Be informed!

Great route with amazing exposure on the crux pitch. This route gets afternoon sun so it's best done in the morning. It's also very popular so an early start is recommended.

The pitches are thus:

p1: 6a (10a) Climb out right from the cave and then straight up about 20m. Do an easy hand traverse left to get to the belay anchor.

p2: 6b (10c) Climb straight up from the belay anchor. Many people seem to use some big stems towards the top of the pitch but there are other ways to do the crux. Once you're on easy terrain you'll see two anchors. Head to the one up and to the left.

p3: 6b+ (10d) The money pitch. From the anchor climb straight up past about five clips and then start a rising traverse to the right. The wall eventually steepens and the holds start to disappear and progress would seem to be thwarted. All is not lost: look behind you and use the obvious feature. You'll know what I mean when you're up there. A couple more clips and a small traverse past the last bolt gets you to an anchor in a small cave. It's well protected from the sun but is extremely slippery.

p4: 6b (10c) Make some hard moves right off the belay and head straight up for about 20m to the next anchor.

p5: 6a (10a) We didn't do this pitch and it's apparently not frequently done. The rock quality is suspect and because it traverses the descent is made more difficult by doing this pitch.

The route is located on the Tonsai Wall and starts near the Freedom Bar. Since the route doesn't start on the ground, a couple of approach pitches are required. The guidebooks indicate that the route is approached by climbing a banyan tree about 50m left of the route and then traversing right. The preferred way now is to climb the ladder by the bar, head to your left before the second ladder, go up through a cave, and then traverse to the left (clipping a couple of bolts along the way) to a belay anchor. One more approach pitch is required. It's rated 6a (10a) but felt harder to us. Climb straight up past four clips and then traverse right about 20 feet to a belay anchor in a cave. You're now at the start of the route.

The descent: we descended from the top of the fourth pitch and did two single-rope rappels to get to the anchor atop the second pitch and then one double-rope rappel to the ground. The last rappel will put you on the patio of the Freedom Bar. The route can be rappelled with a single 60m rope but it's a pain to do it that way.

Bolts. Take a dozen draws and something for the anchors. The route has been completely rebolted with glue-ins and I don't remember clipping any expansion bolts along the way. The anchors are fully bolted and have equalized slings with rappel rings. We used a 60m rope. I doubt a 50m would work for the descent. 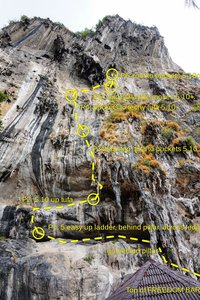 Humanality Topo. It is recommended to skip the… 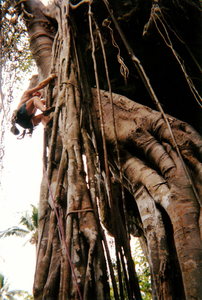 The original start to Humanality. Photo taken i… 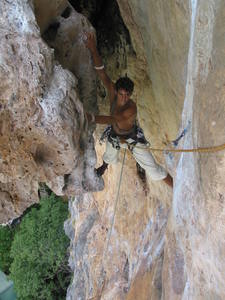 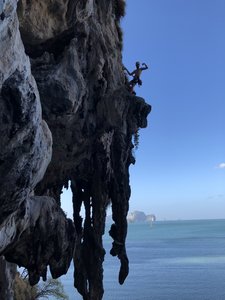 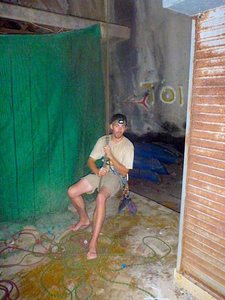 Last rap of Humanality brings you right to Free… 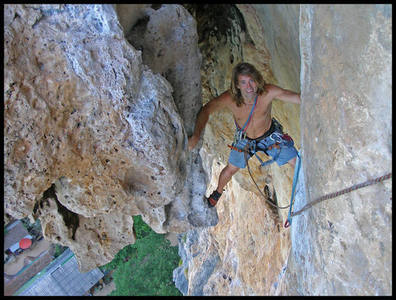 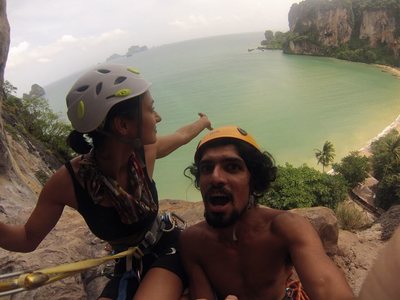 The view. The bay and Freedom Bar below. 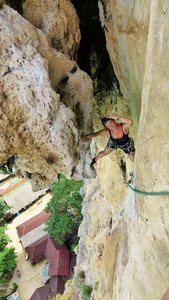 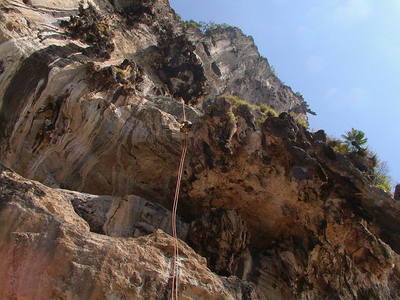 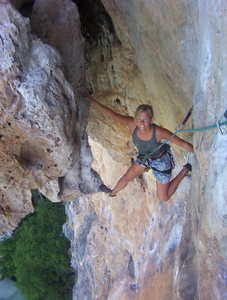 Another shot of the exciting stem move. 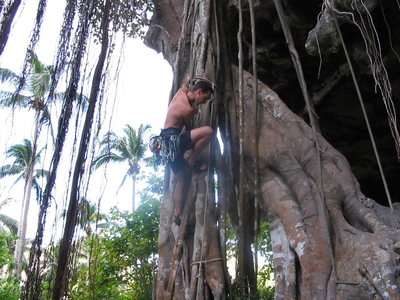 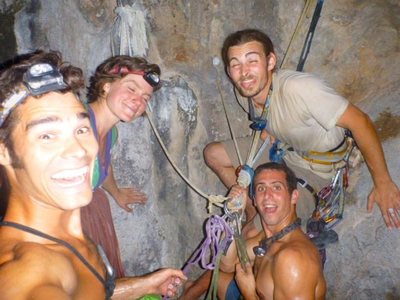 The Gang onto of the last pitch after a full mo…