Routes in The Crystal Cave

This is the center route in the Crystal Cave and takes a direct line up the best rock (no choss here!). It is common to stick clip either the first or second bolt or both for rope management purposes. Since this is basically roped bouldering there's no need to chastise yourself if you start with the second bolt pre-clipped.

Begin in the center of the cave and crank through the undercut bottom on blocky features. The good blocks soon run out and a crimpy move takes you to the "cigarette pack" just below a fist-sized hole in the rock. Milk the hole, clip again, and fire through a finishing sequence that takes you left to a good pocketed seam, which then leads back up and right to the anchors.

Though notably short, this route is continuous and powerful, more akin to the bouldery routes at Hell in American Fork than anything else. Maybe that's why Utah climbers often bee-line it for the Crystal Cave after getting bouted at the Project Wall or the Arsenal ;)

The name derives from a morbid incident in which a deranged sociopath killed an elderly couple in Las Vegas in order to steal their RV. En route to Denver he decided to dump the bodies, burning them up in the trash dumpster at the Rifle rest area by I-70. He was later caught in Denver, still driving the RV.

6 quickdraws and a short rope. 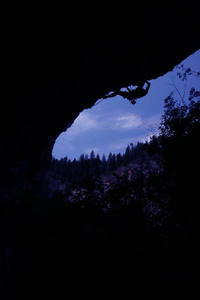