Climb the first 3 bolts that are shared between the two routes for a crux just below the third bolt. Watch the second clip as well, as a missed clip on small hands will toss you onto the slab below.

After the third bolt, this climb splits from After Hours and heads straight up, while After Hours continues along the overhang just above the slab.

Climbing after the fourth bolt is fun and relatively easy, but the temptation to cheat around the corner is often too great. 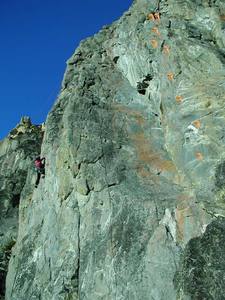 Happy Hour from below. For perspective, the fi…