This is the series of beaches just south and west of Cabo San Lucas proper along the sea edge Pedregal neighborhood (Pedregal is Spanish for Stony Ground).The area is southern most tip of Baja and is such named Lands End.

Numerous bouldering locations are along the couple mile stretch from Divorce Beach on the east end, all the way to the far west end beyond any developed homes or tourist traps. Generally, the larger boulders, crags, and ease of access are on the east end. Fewer things to climb are on the west end and it gets to be away from any civilization that marks the tourism of Cabo/Lands End.

My wife and I started developing the harder boulders back in 2008, but a lot had been climbed for many years prior to our visit! Chalk has always been there! We Finally decided to post the information here so that others can enjoy the pacific breeze and fine granite of the area. Hopefully more climbers will encourage local preservation of the boulders, as many have been removed to make way for resorts over the past few years.

The beach is long, so is divided into three sections here: 1) The eastern end where Divorce Beach meets a small cove of rock with a small sandy beach, known as "Cheaters Cove", 2) the middle section, "Solmar Beach" which is where the Solmar Boulders sit below the Solmar and Finisterra resorts, and 3) the west end, "Playa Pedregal", located around the large rock buttres, isolated from the rest of what is described here. This includes the many boulders under the Pedregal neighborhood and onward west.

The Finisterra and Solmar resorts are above the east end of the beach on Lands End. Stay at one of those resorts (or similar location), or walk westward from Lovers and Divorce beaches. The Finisterra is recommended and was used as our home during the first trip of bouldering development (It was locally owned back in 2008, but not sure now).

NOTE: A restaurant (El Farallon) has been built where we used to traverse westward around the large crag that is located just west of the Finisterra and Resort at Pedregal. Rumor is you can still walk just under the new wall, but it is close to the ocean and some large boulders must be crossed! Walking in maybe still easy enough, but watch the tides. Rouge waves are actually more common than you might think. We have seen several and run up into the rocks because of a few bigger than normal. Even witnessed a fellow who could not get back to shore after being swept out by a wave!

Entering the Pedregal neighborhood and the central portion of the beach from above is not possible. The rich own giant mansions in the neighborhood, but they do not own the beach (Mexico Law). Perhaps some of the resorts and golf clubs to the west of the neighborhood will provide easier walking than the treachery of the new sea wall and restaurant on the other end? 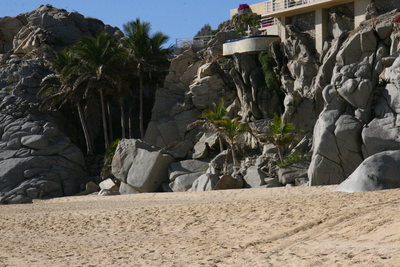 Some good boulders just under a giant mansion o…