Overhanging limestone, directly down hill, south of the Throne, between White Trash Wall and the Deliverance ridge. Several lines established, including a mixed route called Southern Cross. This is a sport line that I suggest using a 0.5 pink tricam between two of the bolts.

The Southern Cross wall is currently listed under Sam's Throne, as it is part of the hill side that is just below the Throne. I have listed the area here until a determination is made on how and where to list the area.

Follow the water drainage (seasonal creek) down hill to slot canyon like drop into the realm of limestone. Cool area.

All Photos Within Southern Cross Wall 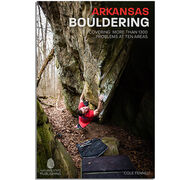