Formerly an old quarry site, this shady, south facing, secluded crag has seen very little, if any climbing before 2016. Strange, being so close, and having similar rock as Whitestone cliff. For whatever reason, it seems to have been overlooked. Long time local climber and C.C.M. member, Albert Carilli came across these ledges while he was being walked by his dog Athena, early in 2016. Having the vision to see what others did not, and the time, he spent many hours cleaning routes by himself. Realizing the scale of the project was great, and the rock quality good, he recruited the rest of the C.C.M. to help out.

After numerous days of effort, by a lot of different people, many fine routes were uncovered. While there is a lot of clean rock, there is also some dirty sections that hopefully will be cleaned up in the future. Viewing from the bottom ,the cliff band is tallest on the left side, gets shorter on the right. Height ranges from about 50' down to about 25'. The right side is the first section you encounter when approaching from Whitestone. The top of the cliff is most easily gained by walking around to the left. The right side is currently more of a bushwhack. Cliff top is mostly flat, easy for top rope set up. Longer static lines can be helpfull . Many routes have been lead. Watch out for remaining loose areas. Standard trad rack generally fine. Grades range from 5.4- 5.10, With a high percentage in the mid to lower end of that range.

Athena Rock can be accessed from the top of Whitestone Lower Cliff, and also via another parking area on the Thomaston road which is a bit closer, and makes sense if you want to climb at Athena Rock only. Whitestone slab is another 5 minutes further.

Whitestone approach #2
From the Lower Lower Cliff: Head straight up to the ridge (climber’s left along the base of the cliff). Scramble to the top of the ridgeline and keep heading straight down into the next gully, which will land you at the base of the Athena Wall.

From Thomaston /waterbury road:
From the intersection of Waterbury Road, and Spruce Brook Road (Rt.262. RPMC building) travel north on Waterbury road one mile. In the curve there is a dirt pullout on the right that will fit 3-4 cars, park there. At the north end of the dirt, there is a trail leading up and right. Walk about 2 minutes, passing an old cellar hole on your left, and there is a left turn then head straight up the steep hill. At a wider trail (an old road) ,turn right, go slightly down hill, cross a washed out dry brook, go uphill turning left. At first junction, go left again, uphill. You are now following the old quarry skid road straight up hill. !0-12 minutes of walking. Yellow plastic tape marks the trail as well. The crag will appear on your left. Continue to the right side of Athena rock to gain the marked trail to Whitestone slab area. 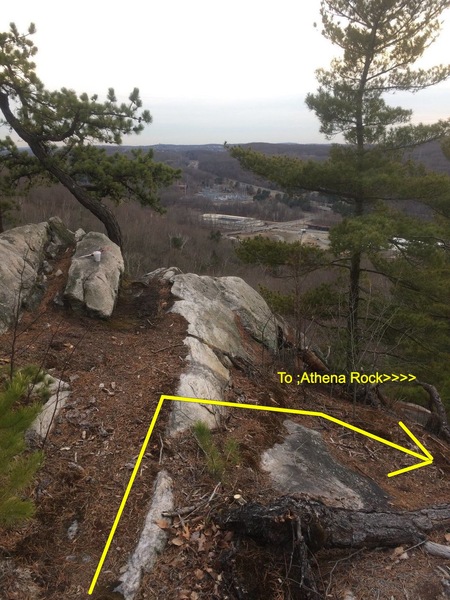 Trail to Athena rock. From top of lower cliff 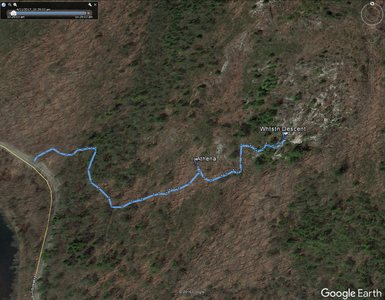 gpx track from Waterbury Rd to Athena to Whites… 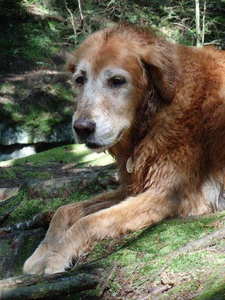 All Photos Within Athena Rock 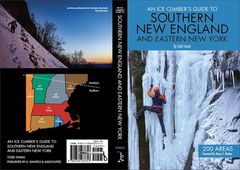