Parks Closures and Day Use Permits Parks were closed in 2020 then a day use permit system was instituted in some places. Please check Parks and Rec Site Closures for up-to-date information. Specifically, for the Stawamus Chief before using to ascend or descend for climbing.


The popularity of Squamish within the #vanlife community has increased to the point that there is great concern about the group’s collective environmental impact. “Wild” or “Freedom” camping has become unmanageable environmentally because of the high numbers of campers. This is a serious issue that causes conflict between locals, home owners, and climbers!

The District of Squamish PROHIBITS camping within the municipal boundary, This includes sleeping in a vehicle anywhere within District boundaries. A bylaw gives the District the power to issue tickets for contraventions.

· the dirt road to the kitesurfing “Spit.”

Mt. Habrich is a granite horn east of Squamish. Despite a fairly lengthy approach, some routes on Mt. Habrich are quite popular with with multiple parties not uncommon on summer weekends. The rock is well featured and generally very good quality, and the views are spectacular both on route and from the summit.

Access has improved in 2014 with the opening of the Sea to Sky gondola.

Begin by reaching the upper gondola station, via one of the following:

1. Pay to ride the gondola. Check their website for prices and times.

2. Hike the trail from the gondola base. This adds 900m of elevation gain to an otherwise long day.

3. Drive to near the upper gondola station via a network of forest service roads. Begin by turning east from Highway 99 onto the Mamquam River road (this is the road by the Apron parking lot). After about 4 kilometres turn right onto the Stawamus-Indian FSR, and then right again onto the Shannon Creek FSR after an additional 1.5 kilometres. A gate blocks the road about 9 kilometres from Highway 99, and about 2 kilometres from the upper gondola station. Park here, and walk the rest of the way. Note that a 4WD high clearance vehicle is required, though barring this mountain bikes would certainly save some time.

From the upper gondola station take the signed Sky Pilot Valley trail. This trail follows a graded road for about two kilometres, then leaves the road via a left turn onto an old spur road. This junction is marked.

The spur road is in excellent condition as of 2014, and the old days of crawling through a tunnel of slide alder are long gone.

A small clearing on the spur road is reached after about 50-60 minutes of hiking in total from the upper gondola station. Often there is a cairn and/or a fire pit here, and this was a common bivy location in years past before the opening of the gondola. Mt. Habrich is visible high above the clearing on the left.

To this point, the approach has been relatively level and has consisted of very easy hiking. That is all about to change. An obvious trail branches left from the clearing and climbs very steeply through the forest, gaining about 500 metres in elevation (to a col just below the west face of Mt. Habrich.

From the upper gondola station, the time of the approach to the west col is about two hours.

Two routes begin from this col. Mt. Habrich's regular route meanders up a series of ledge systems and is mainly 4th class with a few low fifth class moves. Just left of this is the relatively new route Escape Velocity which has become quite popular.

Just below the col, a fairly obvious trail branches climber's right (east) and passes by a clean looking wall with several routes. The trail leads around an arête/buttress to reach the start of the popular route Life On Earth in about 5 minutes. The trail continues, passing the south face route (4th class), and it is possible to traverse the ridge all the way to Sky Pilot with some scrambling and fixed lines.

Note that the west col of Mt. Habrich can also be reached by following the signed Al's Habrich Ridge trail. As of July 2014, this "trail" was only marked for about half its length. The latter part of the trail consists of scrambling up and down over many sub-summits along the ridge leading towards Mt. Habrich. As an adventurous hike, this is very enjoyable and makes for a nice loop when combined with the regular approach. Keep in mind that this route is much longer than the regular approach. It took us almost 5 hours to reach the west col of Mt. Habrich from the upper gondola station going this way.

There are several possibilities.

It is possible to down climb the regular route, which is equipped with some fixed lines. A rappel or two may be necessary. Otherwise the route Escape Velocity can be rappelled with a single rope and is equipped with chain anchors. The quickest way to descend to the west col is likely a combination of these two - down climbing the regular route to the top of the second or third pitch of Escape Velocity, and then rappelling that route the rest of the way to the col.

It is also possible to rappel Life On Earth with two ropes. 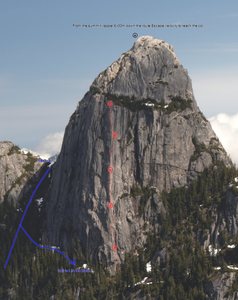 Photo-topo of the route Life On Earth that show… 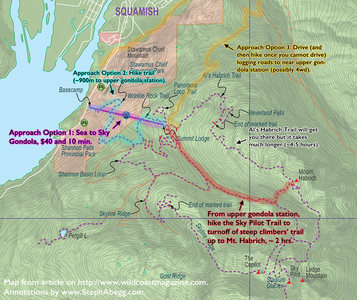 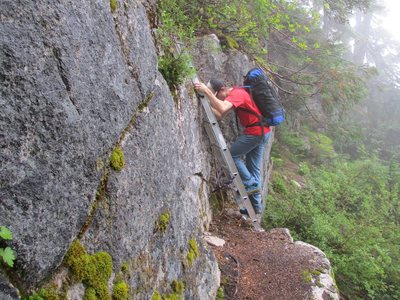 Ladder on the climbers' trail to Mt. Habrich. 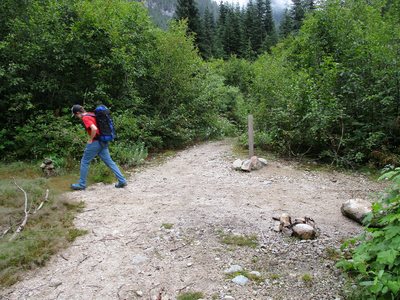 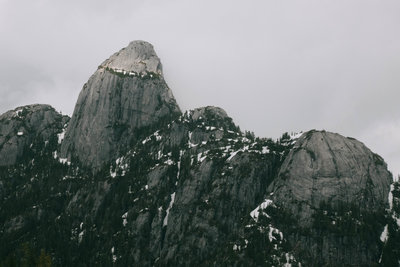 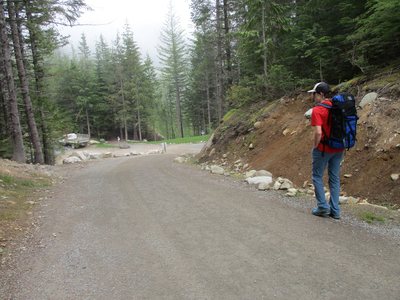 Starting off the approach to Mt. Habrich from u… 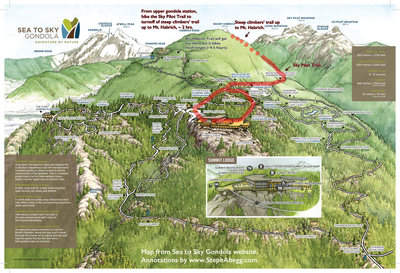 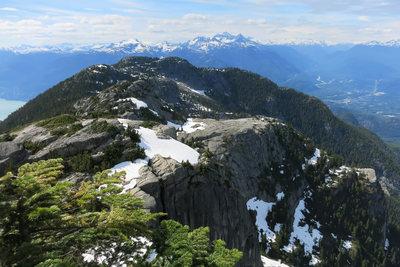 The last part of Al's Habrich Ridge Trail, as s… 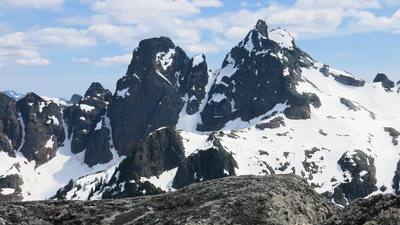 Ledge mountain and Sky Pilot as seen from the s… 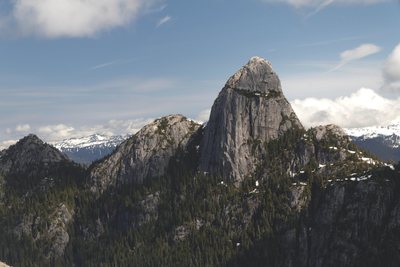 Mt. Habrich as seen from near Sky Pilot mountai…

All Photos Within Mt. Habrich