Welcome to Angola. If you can manage the visa process and gain entry into this country, then prepare yourself for a wealth of unclimbed rock and incredible adventure climbing. Angola has a wide variety of climbing options from multi-pitch granite domes to sandstone sport climbing and amazing conglomerate towers. And for the most part, it is completely untouched territory. If you are a foreigner in Angola, you are probably here for work, so most of the directions are based out of the capital, Luanda. If you are lucky enough to get a job down South, well, all the better as the rock down south is bigger drier and less explored. The weather here is generally warm/hot and the best time to climb is the Austral Winter (May-Sep), which also happens to be the dry season. So far, only a few dozen routes have been done here to my knowledge, as the climbing community is rather small (5-6 of us on the high end) for a country the size of the entire SW United States. Expect beautiful climbing in places that will re-define your concept of seclusion. Almost none of the areas have permanent trails to the rockface, so bring a machete and your navigation skills, and expect to re-cut trail to find the base of even established routes. Trails that we cut months prior are completely gone when we return after the wet season. Access so far has been pretty easy, as long as you respect local culture and speak to the village chief (soba) prior to starting the approach. We have done a pretty good job of building relations with the local villages near the best areas, so the general attitude towards climbers/foreigners should be positive.

Flights from Europe, Asia and South Africa. Visa process can be complicated if you don't have a job here, but some tour companies can arrange a tourist visa for you if you want to come. There is also a direct flight from Houston for those who work in the oil industry or for the embassy. From Luanda, most areas are 4-5 hours drive time, making weekend trips complicated, but not impossible.

Gear: For trad routes, a standard rack will do, with doubles up through #2 camelot. For most of the routes described here, it is worthwhile to bring removable bolts to use as intermediate protection. Although this is not an alpine environment, the routes are remote enough and the climbing very much 'adventure climbing'. In order to accomplish some of the first ascents, removable bolts were used not only to bolt the routes, but also as lead protection on easier terrain. The holes were not sealed up for this reason, so carrying a few 1/2" removable bolts is highly recommended for these routes. If you are going to go through the effort of getting to Angola to climb, it's definitely worth the extra money to buy a couple of removable bolts to ensure you can finish all the routes and increase the safety factor in an area with little to no medical coverage. You do NOT want to get hurt here, especially at some of the remote locations where the best climbs are.

Objective Hazards: Almost all of the routes listed here are off of any sort of trail. Be very wary of snakes. Outside of the areas listed here, there are plenty of other huge rocks just begging to be climbed. Just check with the local village for the status of any landmine clearing in the area. A lot of clearance work has been done, and most of the climbing areas were never mined (mostly along rivers/roads, near cities and near military installations), but it's still worth double checking.

For additional information on other routes (in Portuguese), see climbinginangola.blog.com. I will eventually add this information to Mountain Project over time. 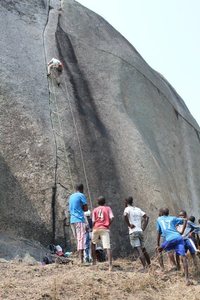 All Photos Within Angola