The Castle Rocks Massif, perched on a ridge above the Kaweah River, is one of the most pristine, high quality and impressive granite climbing areas in the state. It's climbing history is sparse and only includes a few short climbs on the back towers in the 1940s, the first ascent of Castle Rock Spire in 1950, a few climbs on the Fin in the 1980s and sporadic attempts and first ascents in recent decades.

There are about half a dozen major formations along the ridge as well as several outliers and smaller cliff bands. They offer everything from cracks to grade V walls and some of the best face climbing in the Sierra. The back towers lie along the ridge above the spire and boast steep cliffs to the west and easier scrambles from the east. From south to north they consist of Amphitheater Dome, The Ax, South Guard, The Little Spire, and The Keep. Just to their north, and most famous, are the Broken Towers, Castle Rock Spire and The Fin . There is also The Fortress on the ridge to the east and four smaller domes dotting the high point of Castle Peak.

Despite all of this, the legendary approach has kept all but a few adventurous climbers away. There are two options, neither is easy, and each has it's own set of challenges. Depending on your choice you may get to enjoy poison oak, no water, large elevation gains, bush whacking, difficult route finding, heat, ticks, and a whole lotta' fun!

The crux of the area and the reason it sees so few visitors. You have two choices and the favorite depends on your destination and who you talk to.

Buckeye Flat aka lower approach: Most popular route to access the Fin and Castle Rock Spire. Expect heat, poison oak, little water, 4000 ft elevation gain, bush whacking, ticks and occasional rattle snakes. People familiar with this route have done the approach in only a few hours, others never made it.
-Take the Paradise Creek trail from Buckeye Flat campground.
-After a mile or two the trail leaves the creek and makes a distinct turn up a side canyon. Shortly after this turn look for a cairn and the barely visible abandoned castle rocks trail.
-"Follow" the abandoned trail for about five miles up, near the ridge, over a saddle and into the gullies that drain down from castle rocks.
-The main gully below the spire and the small one just before it have the only water and it is seasonal.
-Take the main gully, or low ridge just to the right, up to the fin and spire.

Atwell Mill aka upper approach: Preferred route to access the back towers and The Fortress. Some people prefer this for the spire and fin as well. Expect heat, little water, scrambling, off trail travel, 2,000 feet of elevation gain and 1,000 feet of elevation loss.
-From Atwell Mill campground on the Mineral King road, take the Paradise Ridge trail for about 3 miles up to the ridge.
-Follow the abandoned paradise peak trail west along the ridge until you feel like traversing towards Castle Peak.
-Head towards Castle Peak and pass it on the left (west).
-This will put you behind the back towers.
-To get to the fin and spire go down the gully and traverse ledges and vegetation north to the fin.
-In a small gully before the fin there are two seeps that are dammed and can be alternately pumped for water. (Bring a pump, in late summer and fall they are too shallow to scoop for things like steri-pens.)
-To reach the spire from the fin, either A: rappel down the Silver Lining rap route with two ropes or B: rappel down from the notch at the south end of the fin via three bolted anchors and a bunch of trees with one 70m rope. See

Rap route to get to the spire from the fin. One 70m rope BARELY makes it. . Climb a route or 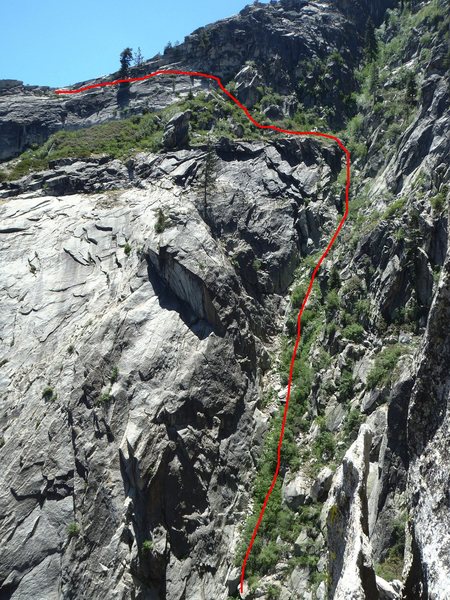 Approximate route back to the top of the fin. to get back out. 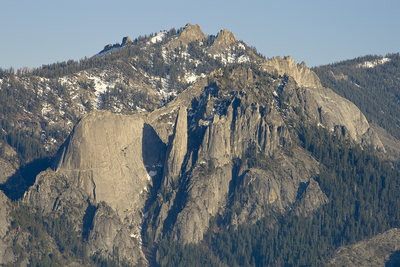 The lower formations (Fin and Spire) from Moro… 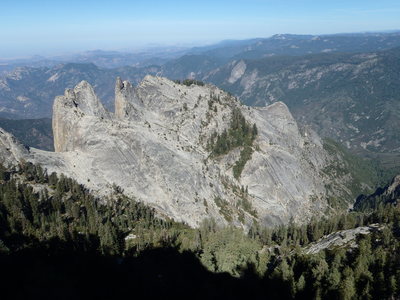 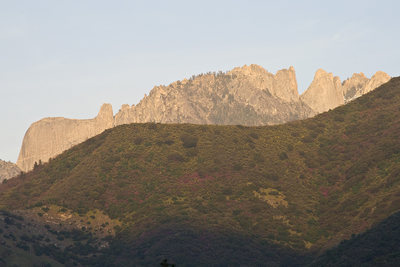 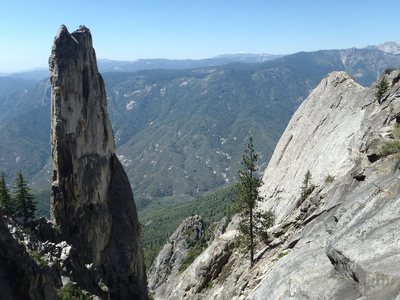 The Fin and Castle Rock Spire 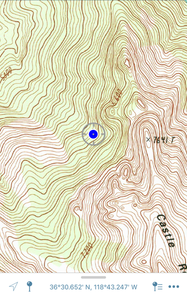 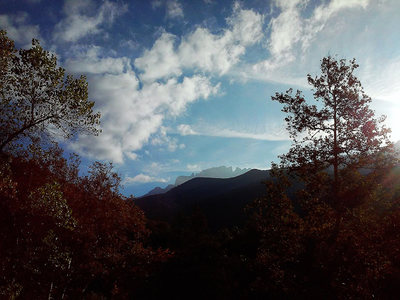 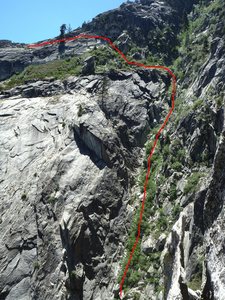 Approximate route back to the top of the fin.

Rap route to get to the spire from the fin. On… 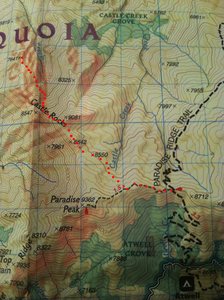 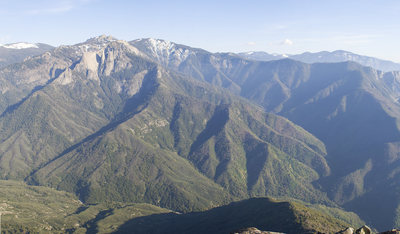 A view of the Buckeye Flat approach. The large… 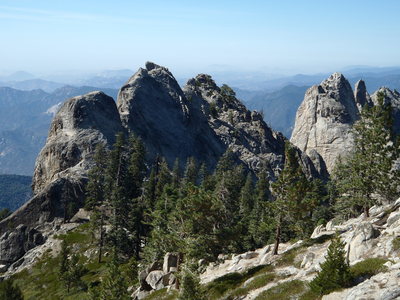 The short, east faces of the back towers. They… 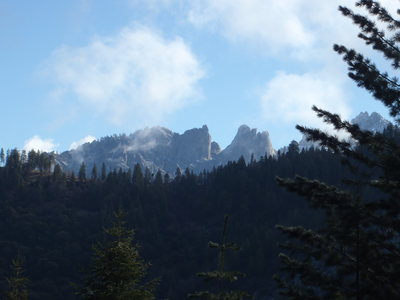 The back towers from near Milk Ranch Peak

All Photos Within Castle Rocks