Due to an extreme concern for fire danger, from 1 June to 30 September, the massifs attendance is regulated.

During the months of June, July, August and September, the access of persons to the massif, traffic and parking vehicles are regulated according to the weather conditions of the moment, defined by 3 levels of meteorological danger: orange, red and black.


Additional information on current restrictions at:

Montagne Sainte-Victoire is an 18 kilometer long limestone mountain in the south of France, with a 7 kilometer long summit plateau, east of Aix-en-Provence. Resembling a long ridge, the high point is the Pic des mouches at 1,011 metres (3,317 ft). The Croix de Provence is a 19 meter high cross and is a popular hiking destination which looms large on a slightly lower point on the massif.

Anyone familiar with the works of the father of Cubism, Paul Cézanne, will know Mont Sainte Victoire from especially the run of paintings from his Constructive Period. Sainte Victoire is commonly referred to as, "Cézanne's mountain."

Of interest to the grimpeur, the rock climbing destination at Sainte Victoire is the south face, which is much sheerer than the gentler slope of the northern side of the massif.

With around 1000 routes, 29 or more sectors and 7 separate parking lots, theres a bewildering gob of climbing to be done. The rock is surprisingly sticky, even the more popular routes. Slab to steep slab with very little past vertical terrain. The area has a reputation for heady routes, especially those routes established in the heyday of the 70s. Technical footwork and a strong constitution might well win the day on especially the test pieces here.

The popular climbing is concentrated at the base of the mountain along a long ribbon of cliff. This accessible terrain contains great rock and offers an immense number of routes especially in the one to three pitch ranges.

The more popular sectors are accessible from the parking lot for Deux Aiguilles:

*Plates Dalles: 20 routes with an emphasis on easier grades. Several two and one three pitch routes. Maximum route length 35m. 4a to 7b.

*Aiguille Bertine: Home to the popular Secteur Grand Parcours as well as Sectuer Commandos. 35 or so routes from 4b to 6a+. THEE popular long route is the 14 pitch Les Grandes Parcours with climbing up to 5c+ in the final pitches to the top of the massif.

*Les Boulons: nearly 40 routes from single to multi pitch (and some long pitches to 50m!) with grades ranging from 4b to 7c+.

Climbing season: south facing and fairly protected from the Mistral, the area works for winter but the prime seasons are spring and fall. Summer can be wicked hot.

In 1989, a fire burned at the mountain's south face. Reforestation has been promoted, but, the effects of the fire are still present. Public access is restricted during periods of high fire danger, especially the summer season. Please take care with any spark or flame producing device and respect the restrictions. Current information at:

Besides climbing, the Saint-Victoire massif is a very popular destination for hiking. There is also paragliding and some caving.

Montagne Sainte Victoire is one of the Grand Sites de France.

Escalade en Pays dAix, Daniel Gorgeon and Philippe Légier.
"Les 100 plus belles grandes voies de Provence", by Nicholas ARMSTRONG is a local multi-pitch selection guide book that presents 100 of the best routes you can find within 7 mountains in Provence (grades 4c to 7b, bolted or trad).

Buying the local guidebooks supports equipment maintenance at the crag.

"Rising to the west of Aix en Provence, the first sight of the soaring limestone peak of the Montagne de Sainte Victoire, rising to 1011m, should set any climbers pulse racing. The south-facing sheets of limestone look both smooth and huge from a distance, a closer inspection reveals a massive area of compact white rock. Off-vertical face climbing is the name of the game here, often with slightly spicy bolting. The 170+ routes we cover here are about 15 percent of the total routes on offer on the mountain, if you enjoy the place, get the local guide and go off exploring." Chris Craggs from the Rockfax guidebook, France: Côte d'Azur

"The famous great white mountain rising from the Mediterranean plains just E of Aix is perhaps the most revered natural feature in the whole of Provence. The artist Cézanne, painting it repeatedly, brought it to the attention of a wider world. It is easy to see his fascination. The ivory white rock captures and intensifies every light and mood. If the sky is angry then Sainte Victoire is black, if the sky is clear blue, the mountain lives, if the sun sets red then the hillside becomes a wall of flame." Bill Birkett from the Cicerone guidebook, French Rock.

"La Montagne Sainte-Victoire :
Above Aix en Provence, not far from the Mediterranean Sea, this mountain is the home of at least a thousand routes. These are run-out, committing and sequencey climbs that require good footwork. Try the legendary, seldom repeated big routes, OVNI or Hyper Médius, both 6c (5.11b) and you will understand. These climbs require a strong constitution and perfect foot work. It is here that Christian Guyomar and Christian Hautcoeur wrote a page in the history of climbing. Four decades ago, they climbed these routes using hooks and bad pitons. Since then, bolts have replaced these, but the runouts are still there, so you will be stepping into a bygone era of boldness. The strenouous athletics of the average sport route are replaced by precarious footwork. Tight shoes and steel fingers are essential.
Finally, let us emphasize that judgement and mental fortitude play big parts. Sainte-Victoire is the ultimate test for mental weakness. If you climb here enough, your confidence will increase." Stephane Silvestri in Gripped Magazine from the article Traditional Sport Climbing in FRANCE. The Innovative "Old World"

The easiest option for folks across the puddle is to fly to Marseille or Nice and rent a car.

Sainte Victoire is 35km from Marseille and 180km from Nice.

The A8 autoroute runs south of Sainte Victoire and Aix-en-Provence. From Aix, seek ye the Route de Cézanne, the D17, which traverses under the south side of the massif from Aix to Puyloubier.

If coming from the Nice direction, exit the A8 onto the RN 7 in the direction of Aix, and, turn to Puyloubier.

Trails to the crags are well marked and well maintained. 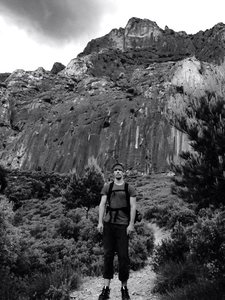 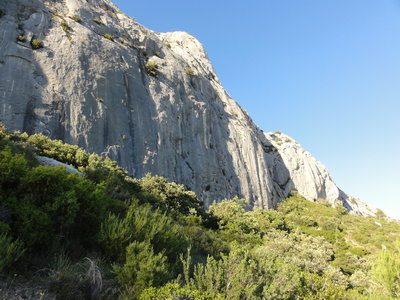 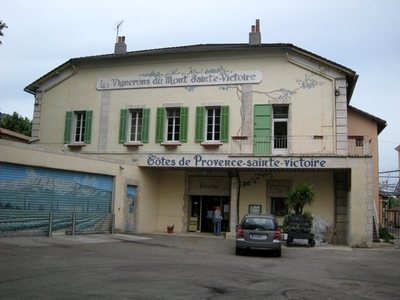 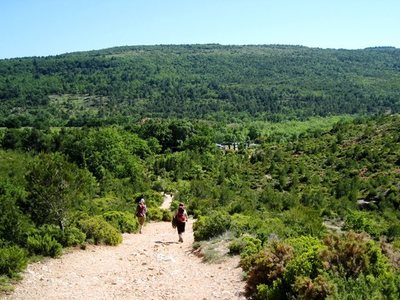 Back to Des Deux Aiguilles parking lot at Saint… 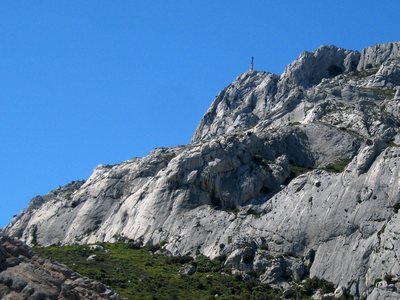 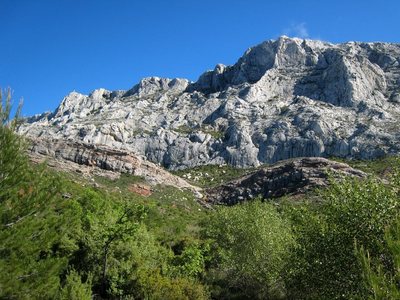 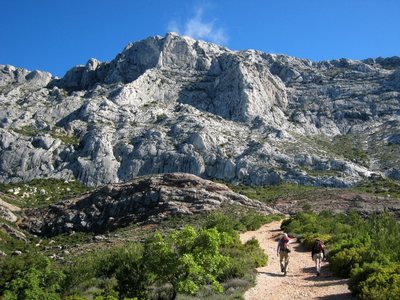 Hiking in to Sainte Victoire

All Photos Within Sainte Victoire