Israel is the country known as the Holy Land. It is the birth place of the Jewish religion (which was the invention of monotheism) and then Christianity (Jesus was a Jew, after all). Theology aside there is quite a lot of rock climbing to be done in Israel. The Israeli Nature Authority isn't very climbing friendly and prevents climbing on a lot of the cliffs there. But over the last few years it has allowed some climbing areas to be developed. The two premier areas are Ein Prat, just east of Jerusalem. And Gita, in the north of the country, just east of Acre. Will you come here for just the climbing? Probably not. However, it is an amazing and rewarding place to visit. It is full of ancient places and holds incredible significance for those with an affinity for Judaism and Christianity. If you are drawn here for those reasons and you happen to be rock climber bring your gear! You won't be disappointed. 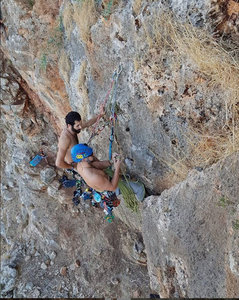 me and asaf hanging by the anchors of One step…

All Photos Within Israel