A few rhyolite crags are located off the Mitchell Trail in the hills immediately northwest of Los Alamos. It is definitely a quick getaway for Los Alamos locals, and provides a good all around workout to climb here.

Of the areas, Clifty is probably the most popular, and has been the focus of recent sport climbing development. Upper Clifty lies above and north of this cliff. Thanksgiving Rock is one buttress of Clifty and a 2-3 pitch trad climb can be pieced together on this formation.
Other sport climbs were put up in The Back Rocks, which was also the site of some of the first climbs in Los Alamos County. Many boulder problems are nearby as well.

Clifty is the obvious first hill filled with numerous rock outcroppings that is visible from most parts of the north community in Los Alamos. The hill rises about 700 feet from town to the summit where Upper Clifty sits. This area is very uncrowded on a regular basis due to the nature of the surroundings. The Cerro Grande Fire raged through this entire canyon in the year 2000 and scorched the flora and fauna that was once present. It is now a rehabilitating wasteland filled with dead trees and lots of harsh terrain. Most of the rock is suprisingly solid but can be a little crumbly in spots.

The early LA pioneers include George Bell, Kermit Ross, Don Monk, and Harry Hoyt, among others. Climbs in the early 90s at Back Rocks were put up by Mike Baker, and Leslie Henderson. The most recently bolted routes were largely a result of the efforts of Scott Beguin.

Drive up the Main Hill road and into Los Alamos. The main road then turns into Trinity Drive. Take a right turn on to Diamond; pass through the next three stoplights and head down the hill past the Conoco station towards the golfcourse. Turn left on 36th St. which is the second street on your left after you pass through the third stoplight at the Diamond and Alabama intersection. Continue all the way up 36th until you reach Arizona Ave. Take a left on Arizona and continue all the way to 45th and Arizona intersection where the Mitchell trailhead parking is to your right. There is also a firetruck playground on your left.

Hike the Mitchell Trail 69 toward the giant green water tank. You will cross a dirt road and the Perimeter Trail, but will reach the water tank in 5-10 minutes, if you stay on the Mitchell Trail. The Clifty escarpment and Thanksgiving Rock are just ahead on the right; Back Rocks is farther up. 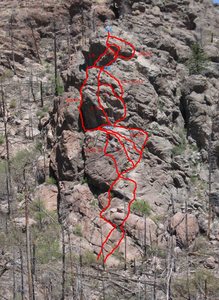 There's more than one way to do it.

All Photos Within Mitchell Trail Area