Access Issue: Climbing on the Navajo Nation is ILLEGAL. Details

While some have made clandestine ascents in the area without incident, others climbing on the Navajo Nation have had their gear confiscated or have been fined. It is unclear what the specific consequences would be if confronted by Navajo authorities. It is unclear if one can get permission to climb here from someone with the appropriate authority to legitimize climbing here. Some climbers have talked to locals, especially the grazing-permit holders, and respectfully asked permission, and have had really positive experiences, climbing as well as a cultural experience, in some areas on the Navajo Nation.

This area is included for historical purposes mainly, and as a location to put those amazing photos everyone has.

Effective July 1, 2020, please do not travel into New Mexico to climb.

On July 1, 2020, the New Mexico state governor issued an executive order (cv.nmhealth.org/wp-content/…) requiring all visitors from out of state to self-isolate or self-quarantine for a period of at least 14 days from the date of their entry into the State of New Mexico or for the duration of their presence in the State, whichever is shorter. The terms "self-isolate" or "self-quarantine" refer the voluntary physical separation of a person or group of people in a residence or other place of lodging. Any person who is self-isolating or self-quarantining may only leave a residence or place of lodging to receive medical care and should not allow others into the residence or place of lodging except for those providing medical care, emergency response, or other individuals designated by the New Mexico Department of Health.

Additionally, NM state guidance requires all persons to wear a mask anytime they are out in public, including outdoor recreation areas.

Climbing is ILLEGAL on the Navajo Nation including Ship Rock. According to the most recently published guide on Ship Rock ("Desert Rock", and "50 Classics.."), Ship Rock was placed off limits to climbing in 1967, but the ban was not enforced until 1970, following an accident. Since 1970, some people have made clandestine ascents without incident. Others climbing on the Navajo Nation have had their gear confiscated or been fined- it is unclear what the specific consequences would be if confronted by Navajo authorities. It is unclear if one can get permission to climb here from someone with the appropriate authority to legitimize climbing here.
Some climbers have talked to locals, especially the grazing-permit holders, and respectfully asked permission, and have had really positive experiences, climbing as well as a cultural experience, at other places on the Navajo Nation.

It is probably legal to drive to the base. It is supposedly illegal to camp there, however widespread litter suggests that this is a popular "party spot" (which may be deterrent in of itself). It is illegal to collect or remove rocks on the Navajo Nation, without a permit.

This area is included for historical purposes mainly, and as a location to put those amazing photos everyone has.

Tsa-Beh-Tai (Ship Rock), the Rock with Wings, is a unique giant basaltic collapsed volcanic neck rising 1500' out of the desert in NW New Mexico, certainly the largest such formation in the world. The multiple summits and fins resemble sails of a black ship sailing the desert, but the Navajo description of a rock with the 3 winged dikes radiating from it is more succinct. Cliff Monster, a man eating dragon, is said to have once resided in the large bowl below the summit.

Reaching the summit of Ship Rock was the last great problem of North American mountaineering during the late 1930s prior to its routefinding difficulties being unlocked in 1939 by the Sierra Club team of Dave Brower, Bestor Robinson, Raffi Bedayn, and John Dyer. Bolts were placed for protection but not for upward progress during the first ascent, and this one of the first times that bolts had been placed in rock in the history of climbing in North America. The FA did use pitons for aid climbing. The story of the FA and attempts at the FA is found in Roper and Steck's "50 Classic Climbs of North America". That this climb was included in this seminal "tick-list", along with its striking summit and apparent inpenetrability, has made this peak draw more interest from climbers than other spires off-limits on the Navajo Nation. Still, this is probably the least visited of the "50 Classics" in the lower 48.

A few different rock types are found on Ship Rock, including volcanic breccia, basalt, and xenoliths (chunks of limestone and gneiss brought up during eruption). Rock quality varies from surprisingly moderately hard to loose and crumbly.

At least 10 routes have been established on Ship Rock, attacking it from most major aspects, with a few more climbs established on its subsidiary summits. Most of these are difficult aid climbs, however the approximate route of the original Sierra Club route is rated 5.9 A0 and should take 6-12 hrs for most parties.

Supposedly, fall is the best season to climb Ship Rock. 'They' say it can be climbed in any month, but in general: Summer is hot; in winter blizzards occur often; in spring, high winds are common.

See the out-of-print and hard-to-find "Desert Rock" for route descriptions and historical accounts from 20+ years ago.

For a great, brief history of the last "legal" ascent of Shiprock in January 1970, read Lee Davis's account in this forum post.

Ship Rock is about 10 miles SW of the town of Shiprock, NM. From the town of Ship Rock, drive south on US-491 7 miles. Turn right on the Red Rock Highway, drive ~8 miles to the prominent dike. Turn north on a dirt road just east of the dike, follow this almost to the base of Ship Rock. Various tracks go to most sides of the monolith, and you should be able to get within a few minutes walk of the rock. To get to the west side of the monolith, cross over the southern dike to the south of the Rock proper. High clearance recommended. 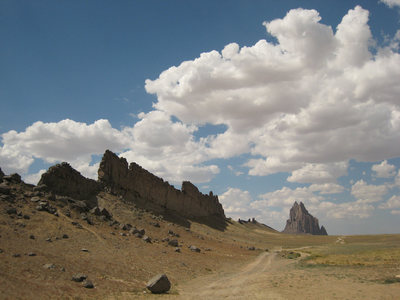 Lava dike walls and volcano plugs don't get no… 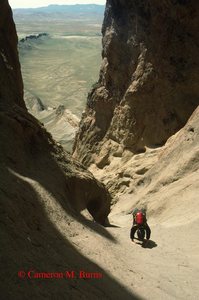 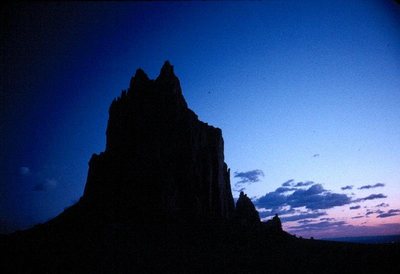 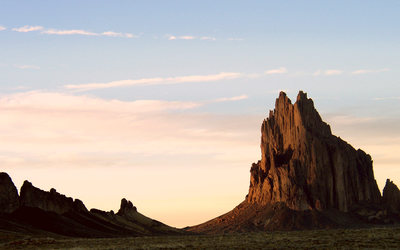 Another gratuitous shot as the sun was going do… 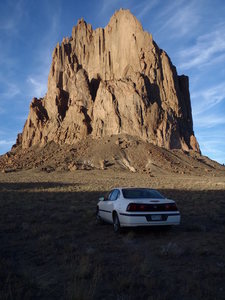 Yes, even an Impala can do it 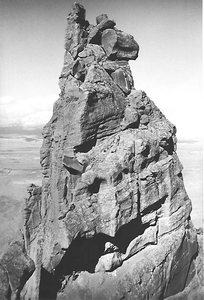 A view of the main summit from the south summit… 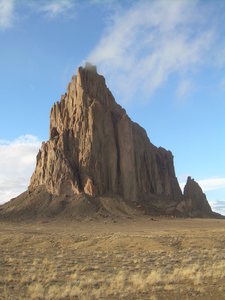 Shiprock after the storm clears 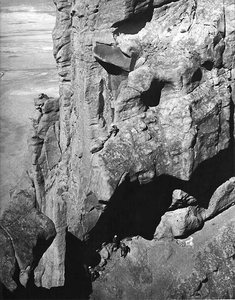 Detail of climbers on the horn pitch from the S… 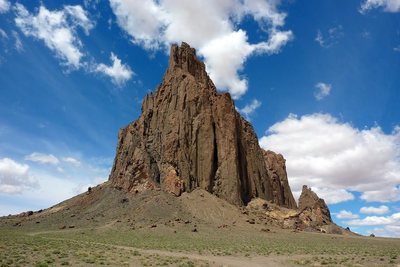 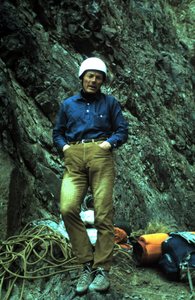 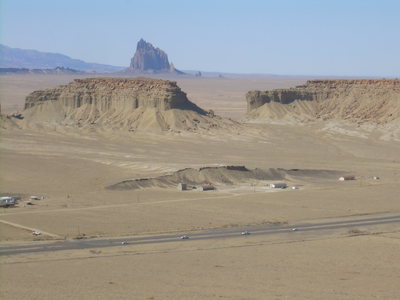 Shiprock from the summit of Barber Peak 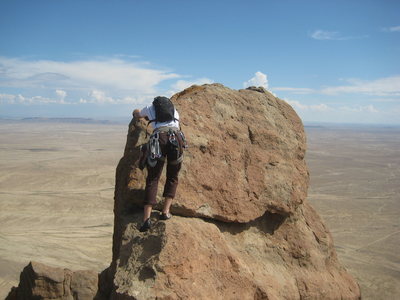 down climbing from the summit.

All Photos Within Ship Rock Area