This is the large butte N by NW of the Bridger Jacks, across Lavender Canyon. It forms a similar buttress between Lavender and Davis Canyons. It is a wingate mesa with a cap, similar in scale to Bridger Jack Butte. Dan Gambino and I named it the Happy Submarine because from the south it looks like a sub, complete with tower and rudder (some say it also looks like a Cadillac, a cruise ship, and, from the north, a buffalo). The rudder, actually, is a small separate tower that is rumored to have been climbed. In 2001 (I think that is when I was there?), I did not see any anchors. I don't know if The HS had a name before that, but I believe we made the first ascent of the thing so...? Lavender Butte is supposedly the Navajo butte on the mesa to the west.

In 2001, I saw some anchors on the smaller end near the rudder that did not appear to link to the top. The Quinlans have added a couple one pitch routes on the south side, I believe. The very top had no sign of an ascent, so we sprayed our egos on it by building a cairn and leaving a business card. I then held Dan up over the bow while he screamed "I'm the king of the world". It was a nice moment for us both.

This thing has the potential to have more routes than Bridger Jack Butte as it is much larger. There are definitely new lines to be done!

Take the Davis Canyon (like going to the Sixshooters) road into the wash that is the beginning of the actual Davis Canyon. You will be driving on the south side of the South Sixshooter. The Happy Submarine will be directly to the south. We approached it from the road at a random place that seemed to be the closest. The hike is about an hour (a little longer than going to the sixshooters). High clearance is necessary. Also, you are able to drive around the bow of it, skirting Dugout land, to access Lavender Canyon, perhaps this would take you closer? 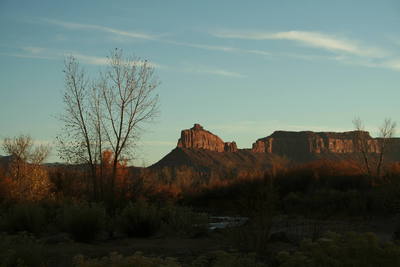 The Happy Submarine from the Superbowl.

Moab Climbs: High on Moab
Karl Kelley / Sharp End Pub…
Not only a great resource for the desert climber, but 100% of royalties go to the Access Fund.
About·Free Stickers·Widgets·API·Help