Cathedral Buttress offers an experience different from most Teton routes. Probably the highest concentration of pure non-summit rock climbs in the Park. Many high-quality classics, including The Snaz, Aerial Boundaries and Caveat Emptor. The lower elevation and south-facing nature makes many routes early-season endeavors. There is enough alpine weather and routefinding, however, to remind you you're in the Tetons.

Cathedral Rock is an awesome playground, one of the best for stacked pitches at a harder level in the Tetons. I've spent a lot of time up there. Here are some notes on various linkups and some descent beta.

Two really fun linkups to mix things up a bit:
1) Climb the first two difficult pitches of Caveat and traverse over to the base of The Snaz's crux pitch. Rap here or continue up Cousin Leroy. You can also do a double rope rap from the anchor at the base of The Snaz's 5th pitch and climb The Snazette crack, but this adds on a good bit of time.
2) Climb the Snazette variation to the Snaz and continue up the upper two difficult pitches of Caveat. The Caveatte linkup! You do cut off the classic 2nd hard pitch of Caveat, but the Snazette is a very worthy and beautiful crack

Descent: I have rapped the Snaz rap route with 70M double-rope (described in in Andy's comment to Caveat's). It is certainly nice, but both times I've managed to get my rope stuck in flakes during the rap that begins at the top of the Snaz's 5.9 wide pitch. I think the best option might be to just use the bolt anchor at the base of the 5.9 wide pitch instead of skipping it.

Directly across from the Moose Visitor Center, make a left onto Moose-Wilson road. Make a right onto a dirt road after about 10 minutes. Follow this road to the Death Canyon trailhead. From the trailhead, hike past Phelps Lake and into the canyon. After about 3 miles, reach a section of switchbacks that come extremely close to the creek.

For The Snaz and Caveat Emptor, instead of turning back west after the sixth switchback, continue straight, scrambling up to a large ledge. If the trail begins to level out an enter a big valley, you've gone too far! Follow this ledge to a slab with a large tree that leads to a broad ledge above. This is the approach pitch for the Snaz and Caveat Emptor.

For Aerial Boundaries and Escape from Death, continue past all the switchbacks until the trail just begins to level out. See that route description for additional info. 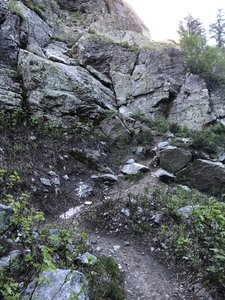 The 4th class scramble up to the ledge as seen… 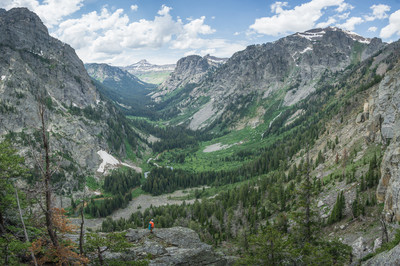 view up canyon from the walkoff 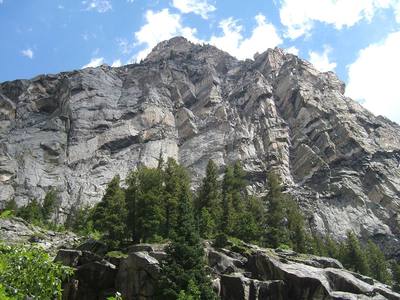 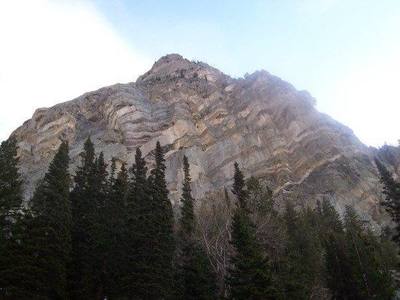 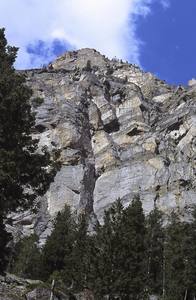 All Photos Within Cathedral Buttress