Monument Rock is the prominent white, sandstone tower seen near the town of Monument west of I-25. It is composed of the worst quality rock possible to climb on. You can drill a bolt in its sandstone flanks in 30 seconds and pull it out with your hands. You can pound pitons and pull them out with a slight tug, no matter how good they seem. Many people say that the Fisher Towers of Utah have the worst rock quality for climbing, but Monument Rock is worse. The climbing is extreme, not because of difficulty, but because it takes a complete mastery of bad rock to get up it. Virtually no protection will hold a long fall.

Having said this, Monument Rock is a classic formation. Its history goes back to its first ascent in 1966 via the South Face route. It has only been climbed a few times, according to the summit register.

Monument Rock is the large, white tower to the west of I-25 near the town of Monument (just north of Colorado Springs). From I-25, take Exit 161 into Monument. After crossing to the west side of the highway, go a short distance (maybe a 1/4 mile) before turning left on 3rd Street. Follow 3rd as it curves around and heads south, then take a right on 2nd Street and cross the train tracks. 2nd Street immediately comes to a T-intersection. Turn left on Mitchell Ave. Follow this until you turn right onto Mt. Herman Road. Park in a turnout about a quarter mile after Mt. Herman Road turns to a dirt road. Walk down the hill south to the obvious white sandstone tower. This is Monument Rock. 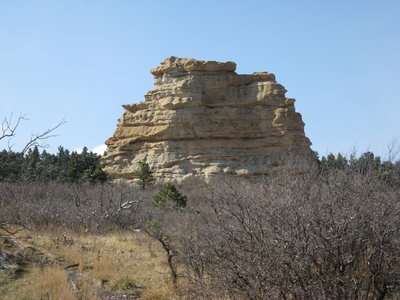 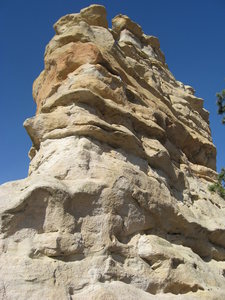 West end of the south side. This is the "route… 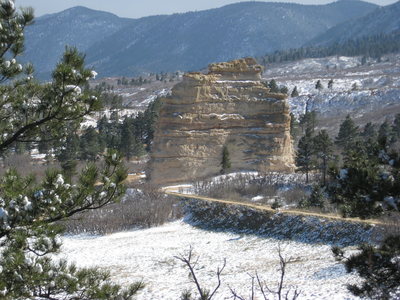 Monument Rock from the north side. 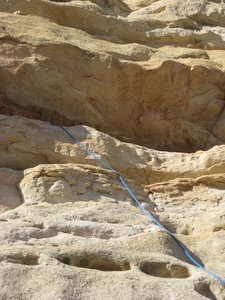 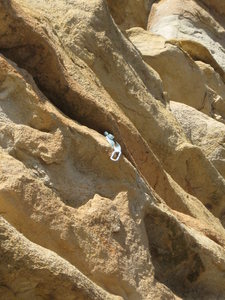 All Photos Within Monument Rock