Routes in The Painted Wall

The Painted Wall is the tallest cliff in Colorado, and the third tallest in the lower 48 after El Cap and Notch Peak. The complex and visually stunning wall has a well-deserved reputation for loose rock and committing climbing.

Before climbing on it, and to acquaint yourself with the general downstream layout, I suggest a hike to the top of the Painted Wall along the North Rim. From the ranger station follow the North Vista trail past Exclamation Point (near here one catches a good view of the Escape Artist buttress) and towards Green Mountain. Well past here, as the trail turns noticeably uphill it is necessary to head overland toward the rim, crossing a large meadow before reaching the trees, and with routefinding difficulties, the top of the cliff. The last part of the hike should give you some respect for the inevitable late-night trudge back to the campground after climbing on the Painted Wall. (From rim to meadow was cairned as of October 2012.) About 3+ hours round trip with good beta.

Another excellent prep session is to descend SOB Draw en route to another objective, drop gear and hike downriver to the Painted Wall, then return and climb your route, knowing it will be shorter than a Painted Wall objective. Depending on season and water levels, the hike along the river can be an enjoyable romp, or a brush with Death by Poison Ivy. You will pass all the Arete climbs, from Lauren's and the Russian Arete all the way to the Porcelain Arete, the last and most elegant of formations holding these adventure climbs.

As you approach the Painted Wall from below, several features come into view. You first pass the Northern (sometimes called Eastern) Arete of the Painted Wall, a climb with good 5.10+ down low and the worst bush thrashing in the Black up high. Just left of this is a sloping talus field perched several hundred feet of lower 5th class climbing off the deck. From this platform the Dragon, Serpent and several other routes begin. Left of the terrace is a massive rib of rock descending to the river and forming a large R-facing corner. This is the start of the Forrest-Walker, Stratosphere and the Southern Arete, the climb done by the vast majority of climbers who venture here. If approaching for these climbs, try to stay low near the river below the wall, or you may get stuck too high on really loose talus. Approach is roughly 1.5 to 2 hours, depending on your objective.

Climbing on the Painted Wall involves either a very long day with lots of climbing, or a big-wall approach. If you plan on campground-to-campground in-a-day, climb fast and bring a headlamp. Best for the Southern and Northern Aretes and Journey Through Mirkwood (although many parties intentionally bivy on this), and (hopefully) for Stratosfear. In general, consider an unplanned bivy a possibility. Ascents of the aid routes, and for many, the spectacular Serpent (which has been done in an 13.5 hours by Mike Pennings and Josh Wharton) will require portaledges and haul bags. The climbing season is short due to bird nesting closures from April 1 to July 31, effectively eliminating May, the prime time to climb (with long days and lower temperatures). August and early September can be very hot; the winter can be frigid.

The nature of the rock on the Painted Wall is troubling. The rock is often shattered, plated, sharp, and loose, formed into blocky passages without distinct lines. This results in a climbing experience at once challenging, but also quite nebulous and fuzzy. This is not the place to climb on your slinky 9.0 rope; indeed, some climbers lead on double 10mm (or thicker) ropes on routes like The Serpent/Dragon and Stratosfear. Remember to interpret any route description with caution. Treat any climb on the Painted Wall as a major undertaking demanding experience and commitment from the climber.

From the North Rim campground, head down the SOB Draw to the river, then downstream to the Painted Wall.

Mountain Project's determination of the classic, most popular, highest rated climbing routes in this area.
More Classic Climbs in The Painted Wall » 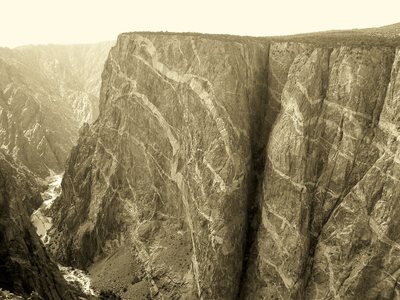 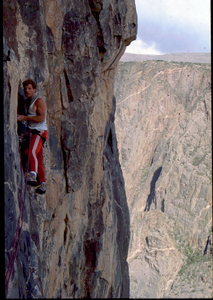 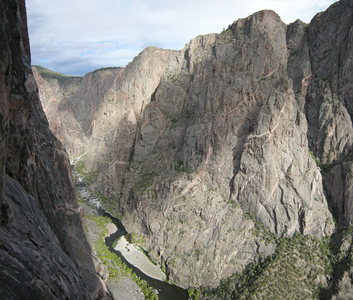 Looking upstream from half way up Journey Throu… 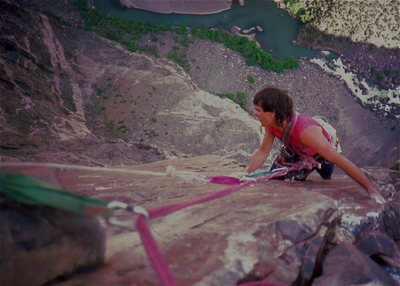 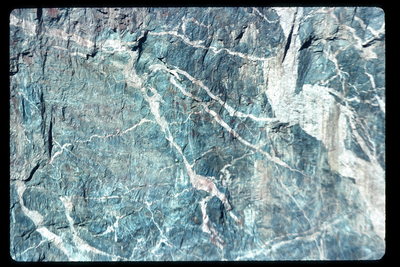 A picture my mom took from the south rim of me… 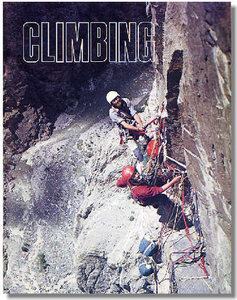 Rusty Baillie and David Lovejoy on the first as… 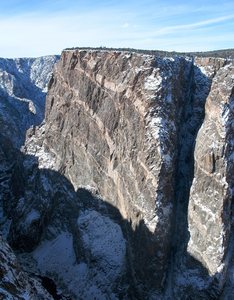 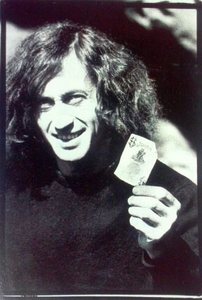 Derek Hersey and Joker card found at the base o… 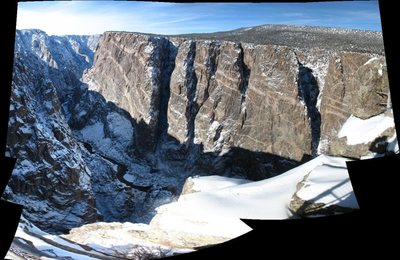 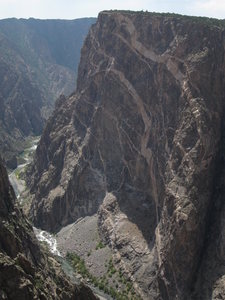 Taken from the "Painted Wall" viewpoint on the… 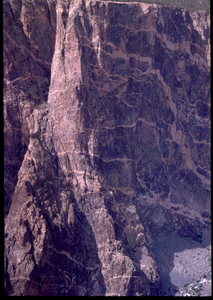 All Photos Within The Painted Wall


More About The Painted Wall